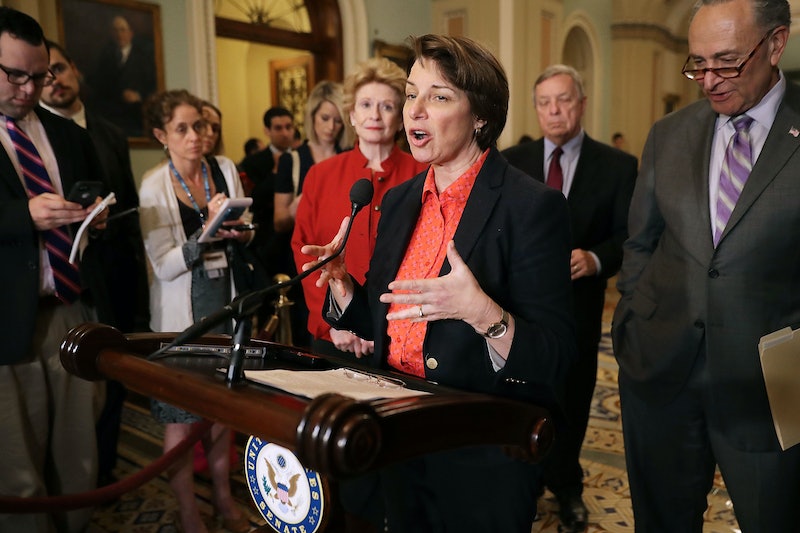 U.S. intelligence agencies concluded long ago that the 2016 presidential election was hacked, and it's not entirely clear that it won't happen again. Ahead of the November midterm elections, elected officials want to make sure the Kremlin is kept out of the 2018 voting booths, and with just a few months to go, time is of the essence. According to Politico, one senator from Minnesota is now pushing to pass the Secure Elections Act to protect U.S. midterms from Russian hacking.

Democratic Senator Amy Klobuchar, the top Democrat on the Senate Rules Committee, has expressed worry that the approaching November election could fall victim to online attacks from overseas.

"I’m very concerned that you could have a hack that finally went through," Klobuchar said Sunday on NBC's Meet the Press. "I think you also have the fact that you've got the president undermining this on national TV still after his security people ... go in front of the world and they say this is happening, he says that night at a rally in Pennsylvania that it's a hoax. So, that concerns me."

Klobuchar has been appealing to both her colleagues in office and the public to pass the Secure Elections Act, which was created to strengthen coordination between federal and state agencies on sharing information about possible threats or attacks to election systems, Politico reported.

Klobuchar's congressional website describes the bill as a measure that would "strengthen election cybersecurity in America and protect against foreign interference in future elections." The bill would allow for more efficient cybersecurity information-sharing by streamlining the process between federal intelligence entities and state election agencies. It would also give security clearances to state election officials and offer support for states to boost security surrounding elections. The senator is the chief Democratic co-sponsor of the bipartisan measure. Senator Kamala Harris is the other top Democrat on the bill, while Republican Senator James Lankford and Senator Lindsey Graham make up the head GOP co-sponsors.

Though those cyberattacks swarmed American systems almost two years ago, U.S. officials said Russia is still at it; according to the director of national intelligence, Dan Coats, Russia has been trying to worsen the nation's sociopolitical discord by pushing propaganda on controversial, highly-charged issues using social media.

“We continue to see a pervasive messaging campaign by Russia to try to weaken and divide the United States,” Coats told reporters at the White House, The Guardian reported.

But sowing racial and political strife between voters in the United States isn't the only thing intelligence officials are watching for; federal agencies are also keeping an eye out for illicit campaign financing, voter suppression, and digital assaults on politicians as well as voting infrastructure.

The Secure Elections Act should see some action soon; the legislation is expected to go through the Rules Committee later this month. If you'd like to voice your support of the act, you can reach out to your senator here.