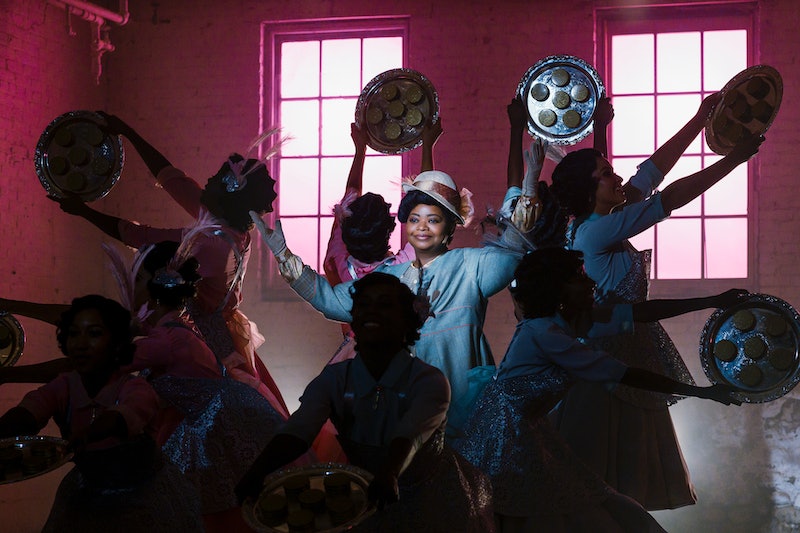 Madam C.J. Walker became the first self-made female millionaire in America with her haircare products for women of color. Befitting Walker's legacy, the Self-Made soundtrack is made up of music from all black female artists. Though Walker established her business in the early 20th century, the music in Netflix's Self-Made: Inspired by the Life of Madam C.J. Walker comes from all eras with artists like Queen Latifah, Kimberly Nichole, Rapsody, Lady Wray, and Santigold contributing to this historical figure's story.

Born Sarah Breedlove, Self-Made follows Madam C. J. Walker as she founds her manufacturing company and becomes a millionaire entrepreneur at the turn of the 20th century in Indianapolis and New York City. Music supervisor Morgan Rhodes tells Bustle that the story of Walker's success had been passed down in her family and that inspired her to feature songs exclusively by black female artists for the Self-Made soundtrack.

"I heard about Madam C.J. Walker from my mother who had heard about her from her mother," Rhodes says. "I felt that was something so powerful about her story having been shared across three generations of black women in my own family and thought it would be really beautiful to have the story of Madam C.J. Walker told by black female artists across diverse generations and genres."

The four-part miniseries is based on the book On Her Own Ground by Walker's great-great-granddaughter A'Lelia Bundles and many of the creators of Self-Made are also black women. "Madam C.J. Walker's products were created for black women — she wanted to empower us, to give us agency and confidence," Rhodes adds. "As her story is profoundly inspiring, I think it's important to highlight black female artists who also inspire us."

A Spotify soundtrack with 14 of the tracks featured in Self-Made is available. But to get the full Madam C.J. Walker experience, here are all the songs by the talented black female artists in Self-Made.

Episode 1: "The Fight of the Century"