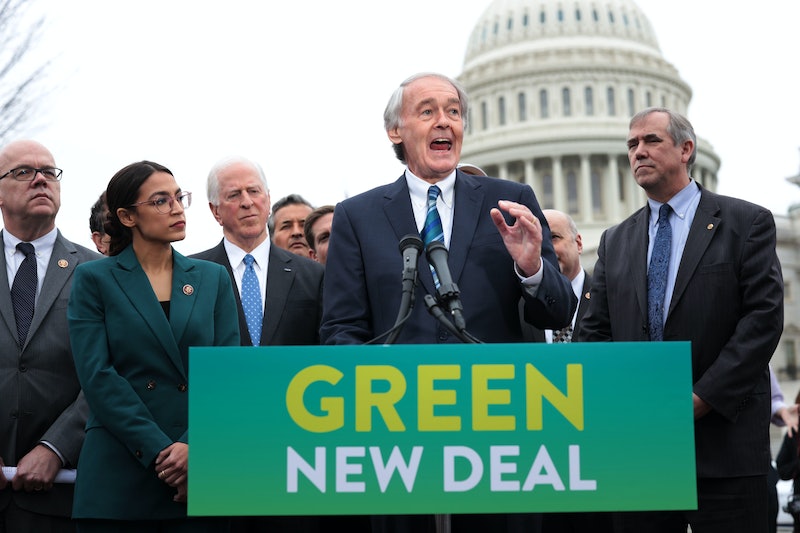 In a press conference on Feb. 12, CNN reported, Senate Majority Leader Mitch McConnell confirmed that a Senate vote on the Green New Deal will definitely be happening. And since five of the 11 senators who cosponsored the proposal have already declared presidential runs, it's safe to say climate change will be a central issue in the 2020 race, regardless of how the initial Senate vote breaks down.

To reporters on Tuesday, via CNBC, McConnell said, "I've noted with great interest the Green New Deal, and we're going to be voting on that in the Senate to give everybody an opportunity to go on record." But before you start to wonder whether McConnell is working to advance the Green New Deal, you should know that he's not exactly in favor of it. As CNN notes, McConnell is known for putting measures on the Senate floor not because he approves of them, but rather as a strategy to expose the support (or lack thereof) for a bill on either side of the partisan aisle.

In a tweet on Feb. 12, McConnell wrote, "We're going to vote in the Senate and see how many Democrats want to end air travel and cow farts."

Now, Democratic senators will have to decide where they stand on the deal, and quickly.

There are a few senators whose positions have already been established on the Green New Deal, particularly these Democratic presidential candidates: Cory Booker, Kirsten Gillibrand, Kamala Harris, Elizabeth Warren, and Amy Klobuchar.

In an article on Medium, Harris explained her support for the progressive deal, writing in part, "The Green New Deal is a bold plan to drastically shift our country to 100% clean and renewable energy. We will repair our country’s crumbling infrastructure, upgrade buildings across the nation, and dramatically cut greenhouse gas emissions."

Booker gave a similar answer in a tweet in early February: "The hard truth is climate change has imperiled our planet—it’s going to take bold action now to save it including dramatic investment in green energy that will create the jobs of the future. We can do this."

Gillibrand, for her own part, celebrated the audacity of the deal during an interview on the podcast Pod Save America. Via The Hill, she said,

The deal may have the support of several Democratic presidential candidates, but it's not as easy to discern where other leaders of the Democratic party stand on it. In an interview with Politico on Feb. 7, for example, House Speaker Nancy Pelosi said, "The green dream or whatever they call it, nobody knows what it is, but they’re for it right?”

McConnell has not yet clarified when, specifically, the bill will be brought to the Senate floor.