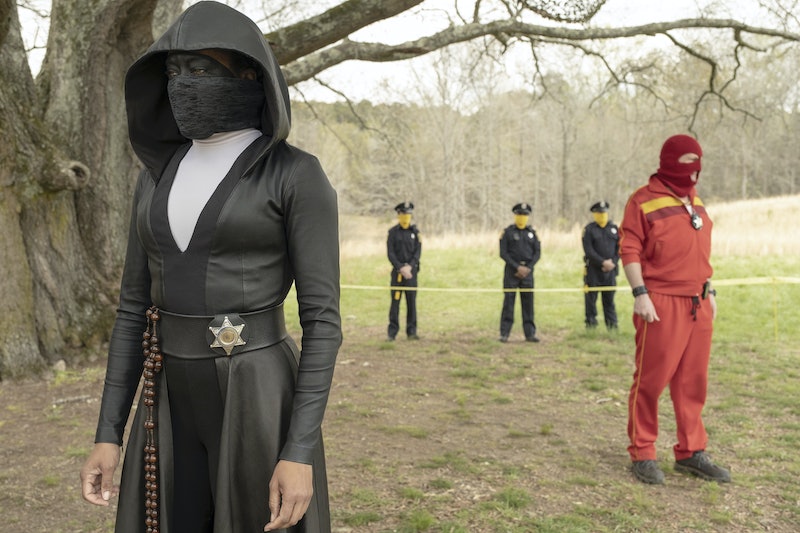 When Watchmen debuts this Sunday on HBO, it will showcase a world different from the one seen in the original comic and the 2009 film. Set 34 years after the events of the comic, Watchmen is centered primarily on Regina King's Detective Angela, a police officer trying to thwart the plans of The Seventh Kavalry, a white supremacist organization operating out of Tulsa, Oklahoma. The Seventh Kavalry is not a real organization, but the name does draw from a real army regiment steeped in a racist past, when white colonists believed in their own divine destiny to spread their way of life.

Likely the Seventh Kavalry is a reference to the real United States 7th Cavalry Regiment, formed in 1866 to fulfill the United States' ideology of manifest destiny. The 7th Cavalry is still celebrated today for helping "win the West," but as Rosebud Sioux writer Evelyn Red Lodge says in High Country News, upholding the 7th Cavalry is a perfect example of "unconscious racism." Red Lodge writes that the 7th Cavalry was expressly formed to "raid Native villages" and "protect homesteaders," who were often white colonists looking to oust Natives from their own land.

The famous General George Armstrong Custer was a member of the 7th Cavalry. Known most famously for his loss at Little Bighorn, many don't realize Custer was responsible for the pillaging and destruction of countless Lakota Sioux and Cheyenne communities. After Custer fell, the Native Americans enjoyed only a brief victory before the United States cracked down with even more invasions and oppressive policies that ripple into today. “[Custer's loss] was a devastating blow for the US military, and we’ve been paying for it ever since,” Wasté Win Young, a protestor at Standing Rock, told The Guardian in 2017.

The idea that a dark, and especially racist, past can evolve and metastasize into a present day problem is a major theme of Damon Lindelof's Watchmen adaptation. The Seventh Kavalry is a new invention, but one that most clearly echoes the Ku Klux Klan and Neo Nazi organizations. We're told early on in the pilot episode that the Seventh Kavalry has organized around Rorschach, the hard-boiled protagonist from the comics, down to even wearing his ink-blot mask.

Read Dave Gibbons and Alan Moore’s 1986 Watchmen today and you might immediately notice that some of Rorschach's journal entries sound like the talking points of the alt right: he notes that a colleague he dislikes may be homosexual, that his neighbor may be a single mother cheating on welfare, and he even uses an ableist slur. He's the lead in the comic, but he's not exactly politically correct, or even a hero.

In the Watchmen show, these views are extrapolated out, where a white supremacist organization has turned Rorschach's views into gospel. It's not hard to see how this may have happened: at the end of the comic, Rorschach realizes that he and the other supers may not survive the final battle. So he makes one final note in his journal and mails it off to the New Frontiersman, a right-wing paper. Rorschach does die at the end of Watchmen — though for more complicated reasons than the average citizen is aware of – so it's likely the New Frontiersman then turned him into a martyr. As a result, the Seventh Kavalry wear Rorschach masks, and their actions are so brutal and racist that it forces the Tulsa police force to hide their own faces to protect their identities.

With the 7th Cavalry reference and the premiere episode opening with the 1921 Tulsa Race Massacre, Watchmen very deliberately draws a line from the genocide of the Native Americans, to the persecution of Black Americans, to the problems plaguing society today. Though entirely a fictional show, Watchmen seems intent on taking a hard look at how the United States' racist actions and policies have shaped — and deformed — present day society and politics. (If it will properly deal with setting up law enforcement as diametrically opposed to white supremacy remains to be seen.) It's a difficult topic, to be sure, but one that's more relevant now than ever as Trump continues to embolden people.

As King herself puts it in the Guardian, “It’s easy to pretend that something doesn't exist if you’re not talking about it." King notes that "for a lot of white Americans, ignorance is bliss" but that "within our community, yes, we’re talking about it all the time, because we’re living it generation to generation."

More like this
'Brookside' Is Coming Back & Soap Opera Fans Are Going Wild
By Sam Ramsden
The Plane Crash In 'Dear Edward' Is Based On A 2010 Tragedy
By Grace Wehniainen
'That '90s Show' Is Officially Coming Back For Season 2
By Gretchen Smail and Grace Wehniainen
Keyla Monterroso Mejia Is Finally The Star Of The Show
By Gabrielle Bondi
Get Even More From Bustle — Sign Up For The Newsletter
From hair trends to relationship advice, our daily newsletter has everything you need to sound like a person who’s on TikTok, even if you aren’t.