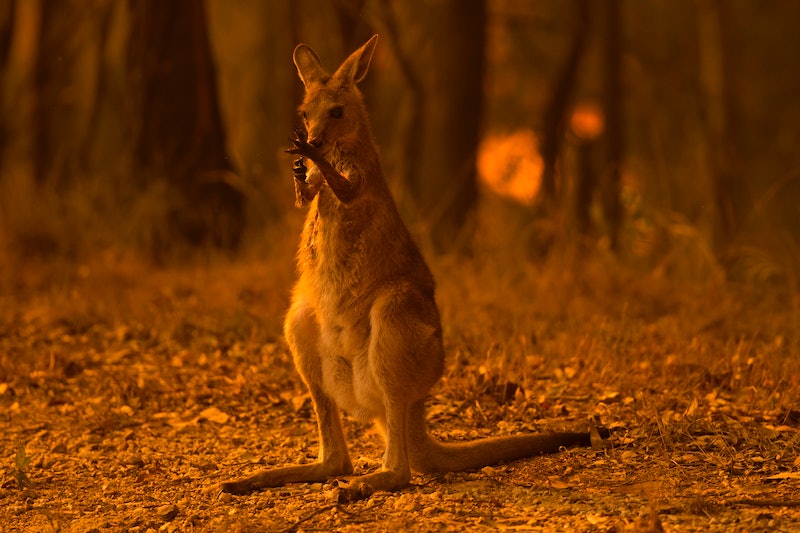 Like the wildfires and landslides of the western U.S., Australia's bush fires are a fact of life. Just because they've been around forever doesn't mean they aren't getting more severe, however. The Guardian reports that, while "[c]limate change does not create bushfires... it can and does make them worse [sic]." As of this writing, huge swathes of New South Wales have been on fire since September 2019, and there's no end in sight.

What has already happened and is currently happening in Australia — such as the displacement of hundreds of thousands of people, the loss of 1 billion animals, the degradation of air quality across the continent, and the delayed response from Prime Minister Scott Morrison, for example — is outright terrifying. So far, The New York Times reports, "12 million acres have been burned by the fires" — more than six times the "1.9 million acres [that] burned in the 2018 fires in California" — and the situation is getting worse. On Friday morning, The Sydney Morning Herald reported that "the merger of two fires in the Snowy Mountains" had created "a 600,000-hectare 'mega-fire,'" one of more than 150 bush fires currently burning in New South Wales.

Australia's situation is dire, to put it mildly, and it isn't clearing up anytime soon. Here are seven books you should read to fully comprehend the bush fires and what they mean for both Australia and the world:

Sunburnt Country: The History and Future of Climate Change in Australia by Joëlle Gergis

Australia has a reputation for being dry and hot, so it's easy to believe that the country's conditions haven't changed much over the last century. In Sunburnt Country, Australian Research Council fellow Joëlle Gergis examines Australia's climate history, including both natural fluctuations and man-made alterations, to craft projections for the nation's climate future.

Dark Emu: Aboriginal Australia and the Birth of Agriculture by Bruce Pascoe

Although climate change plays a decided role in the severity of the 2019-20 bush fires, there's also evidence to suggest that the Australian government's longstanding, pointed ignorance of Aboriginal landcare techniques has contributed to the current situation in New South Wales. Read about Aboriginal agricultural history, including landcare, in Bruce Pascoe's Dark Emu.

In his new book, Garnaut Climate Change Review author Ross Garnaut argues that Australia has the power and resources to become a leader in climate change. In addition to revealing Australia's capabilities, Superpower also lays out a comprehensive plan for the country's future.

On Fire: The (Burning) Case for a Green New Deal by Naomi Klein

A book focused less on the Australian bush fires than on the ways in which climate change has already, possibly irreversibly, altered our world, Naomi Klein's On Fire is a must-read — both in the midst of the New South Wales fires and in the ramp-up to the 2020 presidential election.

Land on Fire: The New Reality of Wildfire in the West by Gary Ferguson

Centering on the wildfires of the western U.S., Land on Fire explains the science behind the season and its increasing intensity, examining what happens before, during, and after the havoc from a massive fire.

Climate Leviathan: A Political Theory of Our Planetary Future by Geoff Mann and Joel Wainwright

As we reckon with the fact that we are going to face — that we, in fact, are facing — the irreversible effects of climate change on our planet, we must also understand how these changes will affect our governments. Climate Leviathan examines how politics will shift in response to radical, atmospheric changes across the globe, and not in a good direction. Read this to understand how we can push for positive alterations to combat climate change before worse comes to worst.

The Sixth Extinction: An Unnatural History by Elizabeth Kolbert

Six years ago, Elizabeth Kolbert's Pulitzer Prize-winning book examined contemporary parallels to major extinction events of the past 500 million years. Today, with the fates of many of Australia's unique species threatened by ongoing bush fires, The Sixth Extinction feels more timely than ever.

More like this
Prince Harry Incorrectly Recites Christina Aguilera’s “Genie In A Bottle” Lyrics
By Jake Viswanath
I Read Prince Harry's 'Spare' So You Don’t Have To: 11 Highlights To Know
By Marina Watts
'Mayfair Witches' Already Changed 2 Major Characters From The Books
By Grace Wehniainen
6 Anti-Police Brutality Organizations You Can Support Right Now
By Syeda Khaula Saad and JR Thorpe
Get Even More From Bustle — Sign Up For The Newsletter
From hair trends to relationship advice, our daily newsletter has everything you need to sound like a person who’s on TikTok, even if you aren’t.