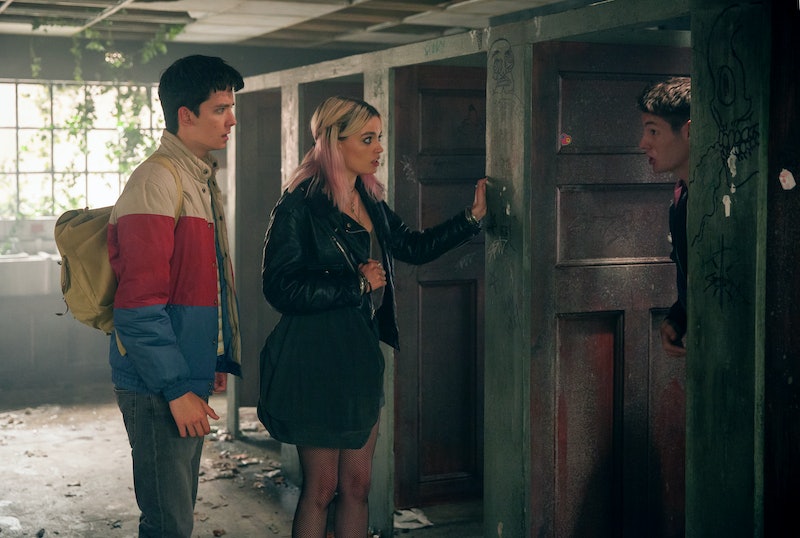 Otis Milburn's student sex education clinic might not be the most thriving or legitimate practice, but he's going to get another crack at it. Netflix announced on Friday that Sex Education was renewed for a Season 2. The British coming-of-age comedy examines the sexual struggles teens face, courtesy of the inexperienced Otis, who uses his mom's sex therapist expertise to help his fellow students. Since premiering on Jan. 11, the world has fallen in love with Otis and the fornicating foibles of his classmates and so fans can now rejoice that there will officially be a Season 2.

In a press release obtained by Bustle announcing the show's renewal, Netflix reported that an estimated 40 million households are on track to watch Sex Education in the first four weeks of its release — the same number of viewers was shared by the streaming site back in January. The announcement also stated that production on Season 2 will begin in the spring and that Gillian Anderson (Dr. Jean Milburn), Asa Butterfield (Otis), Emma Mackey (Maeve), Ncuti Gatwa (Eric), Aimee-Lou Wood (Aimee), Connor Swindells (Adam), Kedar Williams-Stirling (Jackson), Tanya Reynolds (Lily), and Patricia Allison (Ola) will all return. So that means plenty more complicated emotions between Otis and Maeve, Otis and Ola, Maeve and Jackson, and Eric and Adam.

"The reception to series one has been so exciting," series creator and executive producer Laurie Nunn said in a statement. "Seeing how people across the world have connected to characters that began as ideas in my head is incredible. I'm hugely grateful to every person that has taken the time to watch the series, and I can't wait to continue this amazing journey."

To announce the special news, Netflix released a special Sex Education video channeling Mean Girls. The press release noted how Nunn was inspired by Mean Girls and other coming-of-age stories when creating Sex Education, making this announcement the perfect homage. As The Guardian pointed out, Sex Education Season 1 seemed to allude to the Plastics of Mean Girls with Aimee's popular and rich friend group, "The Untouchables." (The publication mentioned Ten Things I Hate About You and Twilight references as well.)

"How do I even begin to explain Otis Milburn?" Maeve ponders in the clip, riffing on how Janis Ian introduces Cady Heron to Regina George. Then, Ola, Eric, Aimee, Jackson, Adam, and Lily all give their Mean Girls-esque perspectives on Otis. Aimee does her best Damian impression about Gretchen Wieners when she says, "That's why his helmet is so big, it's full of secrets." But Lily steals the video with her line, "One time, he cured my vaginismus, it was awesome" — which is far more awesome than getting punched in the face by Regina George.

The eight-episode season left Otis in a rather excited state, so he indeed will be coming back for Season 2. And while Otis might have finally gotten over some of his sexual hangups, there is still a lot more for him — and the rest of the students at Moordale High — to learn when Sex Education returns for a second season.