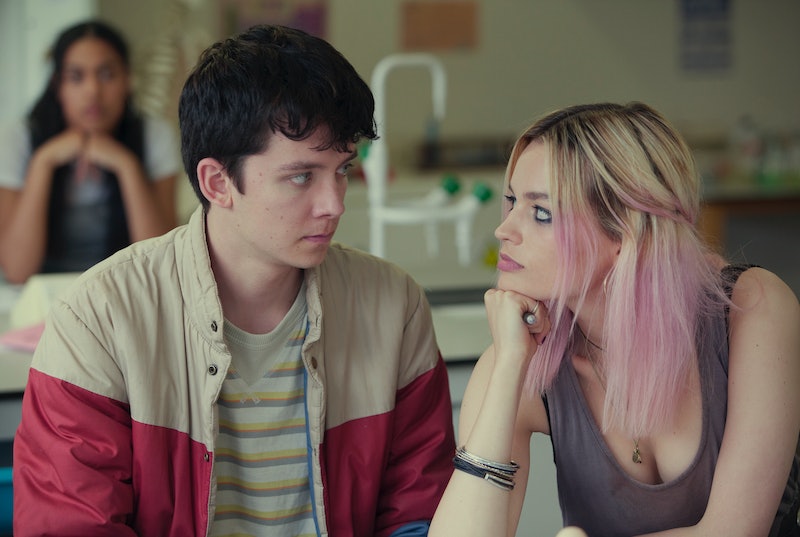 If you went to high school in America, you might find it hard to reflect positively on your ninth grade health class. And even if you were lucky enough to witness the infamous condom-rolling banana demonstration, live and in-person, it's pretty likely you didn't learn all you needed to know about sex in that room. In fact, the trailer for Netflix's Sex Education might impart more useful information about sex and relationships in a few minutes than you were granted in an entire semester, or education, and it's pretty darn funny, too.

Whether you're still in high school, recently graduated, or are coming up on a reunion, you'll find a piece of yourself in this equally heartwarming, hilarious, and cringeworthy show. Creator Laurie Nunn said, "It takes the familiar tropes of the genre and pushes them into new and current territory, telling a nostalgic coming of age tale from a different perspective."

Because Otis was raised by a sex therapist, played by Gillian Anderson, he is wise beyond his years when it comes to sex theory and its many deep nuances and trials. The show's creator calls this vault of knowledge Otis' super-power, and well, he puts it to good use. He and his friends establish an underground sex therapy clinic for a high school population in need, and through that, Otis realizes he might benefit from a dose of his own medicine.

"What started as an interesting hook for a comedy show about teenagers, quickly progressed into an opportunity to deal with often unspoken and difficult issues concerning early sexual experiences, the painful reality of puberty and the urgent need for inclusive sex education," Nunn said. "Whatever stage of life you’re at, we hope you’ll be able to relate to the excruciating, awkward vulnerability of first-time kisses, conflicts, wanks and loves!"

According to the show's creators, Sex Education is a "contemporary British love letter to American high school TV shows." Think The Secret Life of the American Teenager, Friday Night Lights, and even sometimes Glee — they all depict the (American) high school experience a certain way: A juvenile empire divided by stereotypical cliques and gendered experiences. The jock woos the pretty, popular girl, a nerd is undermined for their smarts and sensitivities, and a token queer character might make an appearance, but ultimately, adopt a tragic storyline. And the beat goes on. While these might be stories that many viewers have come to know and love, at this point, they're gravely outdated.

That's where Sex Education comes in. The eight-episode series turns the age-old high school narrative on its head, following a teenage boy named Otis and his sex-therapist mother Jean (Gillian Anderson). It tackles "conversations about sex, identity, love, and the ups and downs of young adult life in a frank and truthful way." Watch the trailer here:

Maybe Sex Education will crack a cap that's been sealed for some time, maybe it'll act as the perfectly balanced gateway to having "the talk" with a young someone you love, or maybe it'll just offer a wholesome, cathartic laugh after a tense holiday season. No matter what, though, when you press play, prepare to learn something new.