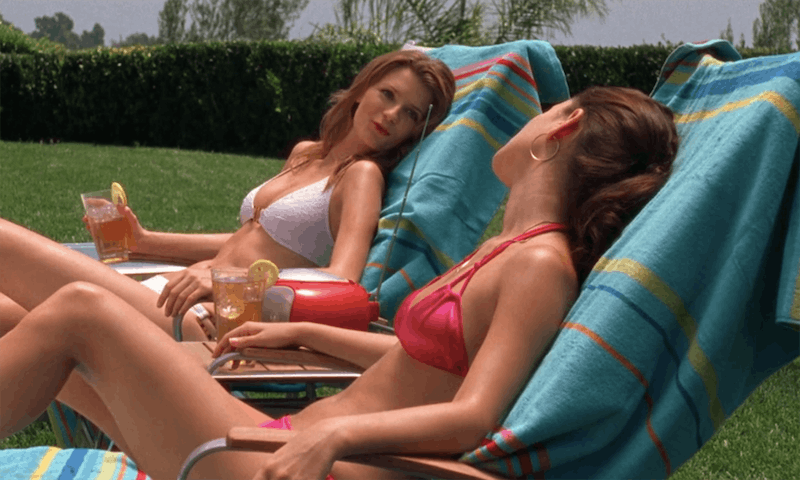 Familiarity breeds contempt, as the saying goes — except for on television. The comfort of predicting the 11 things that are guaranteed to happen on every teen TV show, for example, is as soothing as a mug of your favorite tea. Whether it's science-fiction, action-adventure, a soapy drama, a dark comedy, or anything else, if it's aimed at a teenage audience, a show will absolutely use some "Wait, I've seen this before!"-style plot points. Or a lot of them. A lot of them.

The best and most iconic teen TV shows may seem different in content, casting, and tone — but their substance isn't so different. Sure, some are more about sports, and some are more about murder. And some shows are about small towns, but some are about big cities. Of course, there are series about the wealthy, or the not wealthy, or people who aren't (or are) wealthy in predominantly well-to-do (or poor) areas. They may look different, but they aren't. They're beautiful, emotional, romantic, dramatic teen dramas. They're sexy and soapy and Solo cup-y. So Solo cup-y. (Really, which came first: The pivotal party scene, or using specifically the red Solo cups at parties IRL?)

These are the 11 things you know are going to happen on a teen TV show:

1. There Are Hidden Problems At Home With One Parent

It's always just the one parent, too. It could be battling an addiction, or being abusive to the characters, or having shady financial dealings, or financial trouble that they hide from the rest of the family... Whatever it is, one parent always has something going on that they're repressing, forcing their teenage child to shoulder this burden. This is resolved in one of two ways: The plot line is abandoned or the character is written out of the show following a teen's emotional breakthrough.

Basically, this character is used to explain away any confusing behavior exhibited by a teen. And is a metaphor for responsibility, somehow.

2. There's A Jock With Bad Grades & A Heart Of Gold

Tough on the outside, warm and gooey on the inside, and bad at school because of home life and the pressures of being an athlete in this town, the jock with bad grades and a heart of gold is a staple of most teen TV series. Equally common is the sensitive artist that no one understands and that we're supposed to like — but upon reflection, they're just closed-off and have a rage problem. Either way, you're getting a scene in the guidance counselor's office once a month for this character.

3. A Tutor & Their Tutee Fall In Love

Self-explanatory. What's hornier than getting one-on-one help with homework, right? Also, is peer tutoring something that even happens that often these days? It's a booming industry on television.

4. There's A Huge Fight That Has Zero Consequences

With tensions brewing — as they always are on teen TV shows — things come to a head at either a high school sporting event, or a party that somehow everyone knows about and is dressed up for.

Not to be confused with fake dating, which is a trope mostly seen in Young Adult literature and fan fiction. This involves two people with massive chemistry not being able to tell anyone they're together, whether because it would ruin their reputations, or upset their friends, or one character's intimacy issues.

Always portrayed as really hot, and always a bad idea. Especially when the age gap is illegal. Why do TV shows keep doing this?

Less hot and much more complicated — especially if the child of said parent thought they had a good thing going with the teacher. The parent has always been made recently single for reasons referenced on the show.

Oh yes, the parent-parent hook up is a staple of most teen dramas, somehow. Typically it's between one fabulously wealthy parent and one middle-class one, which is its own thing, and though they don't make any sense at first (see below) it's revealed that they either dated or wanted to decades before the show began.

9. People That Don't Make Any Sense Together Start Dating

For some reason, the most beloved TV couples are often the ones that make little to no sense when you look at it. They might be incompatible or flat-out impractical, but they get together anyway and really work, somehow.

A grim and frequently-utilized event is the surprise death of a teenage character. It's either one or any combination of the following things: Sudden, unexplained, and responsible for launching a murder investigation that is insufficiently handled by the local law enforcement and forces the teens to band together to solve it. Why? Unclear. But it happens so much.

You can set your watch by how frequently, consistently, and often a teen-centric show drops a pregnancy scare. Normally it's just as a heteronormative hookup is starting to take off — bonus points if it's one of the parents experiencing it. The "not pregnant!" resolution is always, always, celebrated by risky sexual activity.

Which series was this list about? It's a trick question, because the answer is all of them. All of them! Every last one. If it's a show aimed at a teenage demographic, the odds are high that the majority of these plot lines were included in the first four seasons. Later on, the really good stuff starts, like "Seriously, how are they dating?" and the ill-fated "We dated and now our parents are!" era of a show.

Despite these obvious tropes, these shows are generally the best and most marathon-worthy ever. And there's nothing wrong with that.