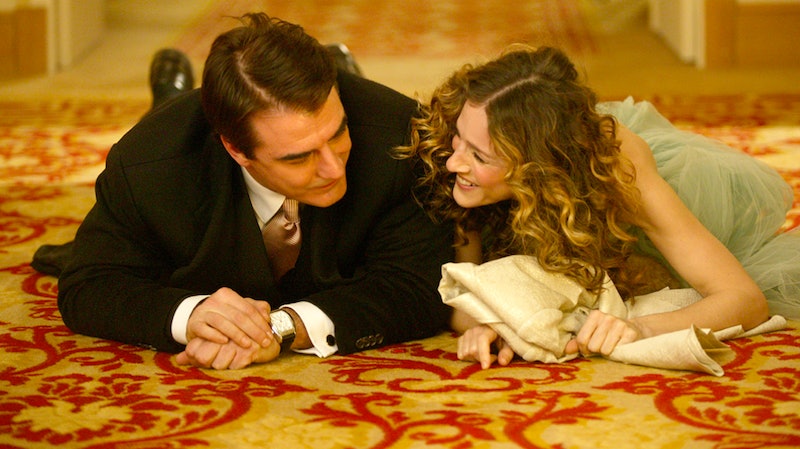 I shouldn't have to defend Sex and the City as much as do. Certainly the HBO series is dated, overwhelmingly white, and features LGBTQ+ characters as window dressing, but the same can also be said of Friends, Seinfeld, Frasier, and many other mainstream comedies of the era. Yet SATC often gets singled out, so much so that knocking down the series has become almost trendy over the years. Too many people refuse to acknowledge it as a groundbreaking and influential precursor to countless other shows about the female experience, and it doesn't help that the two movie adaptations destroyed the perfect tableau that the finale ended on 15 years ago. Yes, the Sex and the City series finale was perfect — and it should have been left untouched.

SATC works best when you think of it as an urban fairytale, and the conclusion to the sixth season, which aired Feb. 22, 2004, provides not happy endings but happy beginnings. Titled "An American Girl in Paris (Parts Une and Deux)," the two-part finale follows Carrie (Sarah Jessica Parker) through what she thinks is her final goodbye to New York and over to France to live with her artist beau, Aleksandr Petrovsky (Mikhail Baryshnikov). It's everything she thinks she wants: to break out of her "I couldn't help but wonder" cycle, to be surrounded by beauty, to be in a committed relationship with someone who just has to be with her.

But as Carrie tries to get settled, expectation and reality begin to diverge, and Parker reflects the character's growing disillusionment beautifully — especially at first, when she's trying so hard to be swept away by the romance of it all. Carrie soon finds that she's completely alone in Paris, and the other women in Aleksandr's life (his ex-wife and daughter), give her a preview of what she can expect from him: mostly absence (because of "the work," in a classic depiction of the self-important tortured genius), with sporadic moments of focused affection.

One lasting image from the finale is that of Carrie asleep surrounded by a voluminous confection of a dress, left alone in an outfit that she previously picked out for her own precise reason — which was certainly not to be Aleksandr's afterthought. Carrie is usually so full of life that to see her diminished like this, by a man, is painful. Just take how she quite literally loses herself when her signature personalized pendant goes missing, or how Aleksandr, threatened by the attention she's again receiving, forces Carrie to miss the party thrown by the fans she unexpectedly meets in a book store — only to abandon her as he basks in the praise of his own hangers on. (But let's be real, he was already dead to me back in Episode 12, when he called her "not serious.")

Meanwhile, back in New York City, Charlotte (Kristen Davis) and Harry (Evan Handler) are still on their adoption journey, which is highly emotional and racked with disappointed, even with their wealth and privilege. Samantha (Kim Cattrall) is deep in the throes of hot flashes from the chemotherapy treatments she's undergoing for her breast cancer, trying to push Smith (Jason Lewis) away before he leaves her because of her fading sex drive and weakened body. Miranda (Cynthia Nixon) and Steve (David Eigenberg) are happy together with their son, but his mother's health woes test their bond and Miranda's bravery.

Sex and the City had always been more about female friendship than either sex or the city, but in the finale, the four main gals are mostly in their own individual storylines. It's a reminder that whatever your support system, ultimately, all of us go through our trials alone.

And all of the episode's plots involve the women each taking a significant personal step. For Carrie, that's deciding to leave Paris and the Russian before Mr. Big (Chris Noth) shows up. For those of us who were Big apologists, his dramatic arrival (that near miss when his car passed Carrie on the street and neither of them notices!) was the climax we'd been waiting for. Carrie realizes that no man is worth giving up her character, and she was absolutely more herself with Big than she was with any of her other boyfriends. Big, meanwhile, finally drops his perpetual bachelor act and commits to Carrie, and his first act in proving that he really, really gets her is to go to her friends — the three "loves of her life" — to find out if this is even something that she would really want.

Because the four women at the center of the series were so specific and typified from the beginning, Sex and the City doesn't get enough credit for their character arcs. For fans who had spent six seasons with them, it meant something to watch Samantha accept that she will grow older and that she can do that with someone, if she chooses. It meant something to watch Miranda, forever the sarcastic observer, engage with the sad, uncomfortable, necessary parts of being a partner. Charlotte's plotline perhaps progresses her the least, but before the baby of their dreams fall into the York-Goldenblatts' laps, the careful planner does have to come to terms with her inability to control the situation. She realizes that, just as she learned when she fell for Harry, her future might not look like the one she'd imagined since she was a kid, but that it could be so much harder and richer and better.

"Today I had a thought," Carrie says at their last brunch she leaves for Paris. "What if I had never met you?" None of the girls need to speak after that.

The Sex and the City finale honors everything that came before it by proving that these friendships were not co-dependent or shallow, no matter how much shoe shopping was involved. Charlotte, Miranda, Samantha, and Carrie enabled each other to be the best versions of themselves, whether you like who they are or not. They set each other up to be able to make choices on their own. Sure, they all end the series coupled up, but that was always going to happen and it's somewhat useless to argue against that now. What's exciting about the final episode is that watching it, you get the sense that there's a lot still to come — heartbreak included — but that the women will still always have a home base in each other.

That the last scene includes a moment of fan service — the reveal of Big's actual first name, John — underlines that the end of Sex and the City was for the show's loyal viewers. The movies, meanwhile, were written to cater to a broader audience, playing up the puns and the fashion and the eye candy and the other easily accessible elements, while also snatching away the happy beginnings of the finale. Thus they remain easy targets, a gimme for critics who want to use them as proof that the overall franchise was materialistic and vapid.

So I try to ignore the films, as much as I can. My Sex and the City ended way back in 2004, with the ending fans truly deserved.