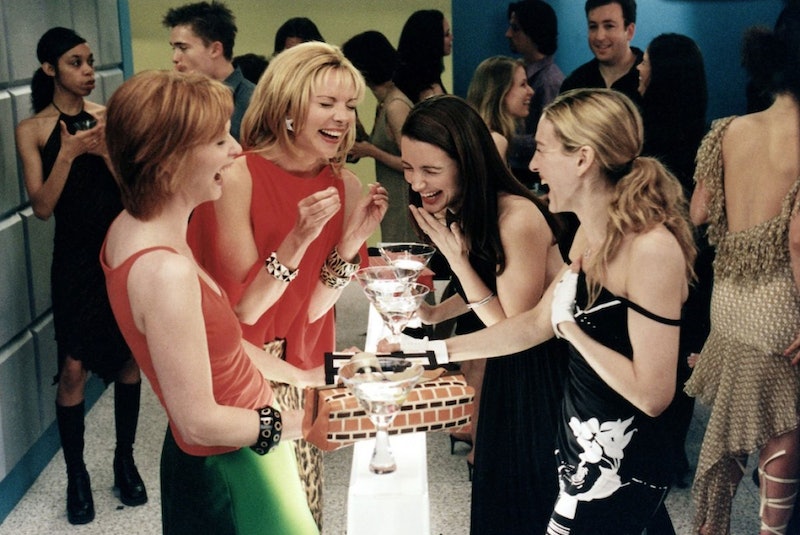 This summer marked the 18-year anniversary of the ever fabulous Sex and the City franchise. As Yeezus would say, “18 years, 18 years.” And, in these 18 years, we learned how to ward off douchebags, take control of our lives, and do it all in a bomb pair of stilettos. Thankfully, once the series came to and end in 2004, Carrie and her crew lived on through the Sex and the City movie (2008) and its sequel (2010), because the legacy of such trailblazing, independent women will never die. But, while we were being mesmerized by Sarah Jessica Parker, Kim Cattrall, Kristin Davis, Cynthia Nixon, and Chris Noth (there, I said it) for two decades, there were some gems on screen (some purposeful, others not) that we all missed.

Some intentional Easter eggs hidden in SATC will truly blow your mind. There were also plenty of on-screen hiccups both in the series and the films what will make you feel like you had one too many cosmopolitans while watching explain why you missed these in the first place. Either way, looking back at these hidden treasures is as fascinating as Big’s logic on marriage. Take a look below.

1. In The Opening, The Bus That Passes Carrie Is Filled With People, And Then Suddenly It's Not

We wouldn't have known the guy Carrie made out with then ditched straight from his car was Bradley Cooper back then. But now we do. And what was she thinking?

Turns out, she hated the clothes in the film, though. So, that's awkward.

4. The Little Boy Who Plays Miranda's Son Brady In The Movie In The Same Actor Who Was The Baby On The Show

5. Carrie’s Address Is 245 East 73rd Street New York, NY, Which Isn't An Address Of Anything Substantial In Real Life

As Samantha says, "a lot of sh*t went down in this apartment," but that won't stop Google Maps from being confused.

6. The Cocktails Were All. Fake.

SJP confirmed this herself, telling Cosmopolitan : "The Cosmopolitans were made of water and food coloring or watered down cranberry juice. Ginger ale was a substitute for champagne and red wine was always just grape juice." Feeling lied to, or what?

7. In The Last Two Episodes Of The Series, Carrie Doesn't Pose Any Questions

I couldn't help but wonder how she didn't have anything to ask. Especially dealing with that douchebag Petrovsky.

8. When Carrie Is Being Fed By Samantha In Mexico, There Are Two Different Teapots Used In One Scene

After all, Samantha is an expert at serving tea.

9. In SATC 2, The Girls Actually Arrive At Marrakech Airport In Morocco, Not Abu Dhabi Airport

This is what Abu Dhabi airport really looks like.

10. When Carrie Announces She And Big Decided To Get Married And Charlotte Epically Freaks Out, She Has A Magical Disappearing Napkin In Her Hand

Where is it? Why is it back? Will it disappear again? Big chaos happening here, if you know what I mean.

11. The Book Carrie Takes Off Of Display In A Bookstore To Replace With Her Own In The SATC Movie Is Lucia, Lucia By Adriana Trigiani

Coincidentally, the 2004 book is about a NYC woman who ends up being left at the altar after planning an over-the-top wedding.

12. As Charlotte's Bridesmaids Walk Into Her Wedding With Trey, The Song "Skye Boat Song" Is Played On The Bag Pipes

This song is also played during the opening titles of Outlander . So now you can retroactively notice this.

13. Until Midway Through The Fourth Season, The Opening Credits Displayed The Show Name In Front Of The World Trade Center

Apparently, it actually required a "little wiglet" to be double-face taped on Kim Cattrall by the show's makeup artist. The actress recalled being "hysterical." Samantha would've given her a pat on the back.

More like this
'Queer Eye' Star Antoni Porowski Is Engaged To Kevin Harrington
By Hugh McIntyre and Radhika Menon
Then Vs. Now Photos Of The 'Enchanted' Cast In 2007 & The Sequel's Stars In 2022
By Marina Watts
See 'Twilight' Stars Together Again For A Sweet Cullen "Family Reunion"
By Stephanie Topacio Long
'The Princess Diaries 3' May Go Ahead Without Anne Hathaway
By Darshita Goyal
Get Even More From Bustle — Sign Up For The Newsletter