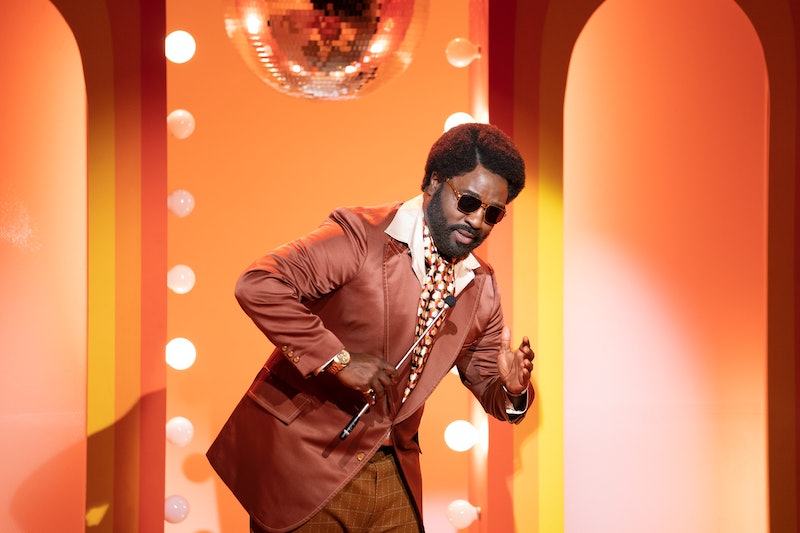 IFC's latest comedy Sherman's Showcase is unlike anything else on television right now. It's a throwback documentary series about a fictional long-running music and dance series hosted by Sherman McDaniels, played by Bashir Salahuddin. The series swerves between "archival footage" ranging from the '50s to the present day from the fictional show, although Sherman McDaniels never seems to age. While there's no real ageless figure who has been hosting the same music-and-dancing show for multiple decades, the real person that Sherman McDaniels is based on is an important figure in television history, even if he's been off the air for a while.

Sherman's Showcase is a variety show in the truest sense of the world, shifting from sketch comedy to commercial parodies to fictional game shows and documentary segments, but the titular show-within-a-show of Sherman's Showcase owes a great deal to the dance-oriented music shows of the late 20th century. Elements of Showcase riff on classic programs like American Bandstand and Solid Gold, but the most obvious reference point that Showcase pulls from when it comes to the show's style, and especially its host, is Soul Train, which was on air from 1971 to 2006.

While the new IFC show is clearly inspired in part by Soul Train and its host Don Cornelius there are some stark differences between the two hosts. McDaniels is an openly despicable human being, having spent his life selling inappropriate board games to children, trying to bust dancers' unions, all while donning a very fake mustache.

Cornelius, who died in 2012, is remembered primarily for having created a platform for black artists that hadn't existed prior to Soul Train and for communicating a message of "Love, peace and soul" at the conclusion of every episode of Soul Train. He wouldn't have been caught dead doing or saying some of the things McDaniels does.

While Don Cornelius' time hosting Soul Train ended in the early nineties, it appears that the Showcase host, created by Tonight Show writers and Salahuddin and Diallo Riddle, has consistently hosted his fictional show since the 1970's.

The show is flexible with its sense of time and space — one of the show's episodes hints at this with a performance of the song "Time Loop" by the fictional band Galaxia (which is fronted by a very real Ne-Yo) — but that's all part of the show's ultimate design.

"We wanted to create the kind of vibe where no one really knows what the hell is going to happen on any given day," Salahuddin told Indiewire, "and sometimes even we don’t know what’s going to happen." He added, "As comedy writers, we really desire to be unbound, and because it’s a variety show, it allowed us to open up the format and write about anything that we wanted. And so the ability for us to do that and also work with talented people who could put their own spin on what we wrote let us know that we had something good here.”

The fast-paced, chaotic nature of the show may take a little getting used to for new audiences, but at its core Sherman's Showcase is as much a celebration as it is a deconstruction of black musical history and the legacy that Soul Train and Don Cornelius have left on American culture.