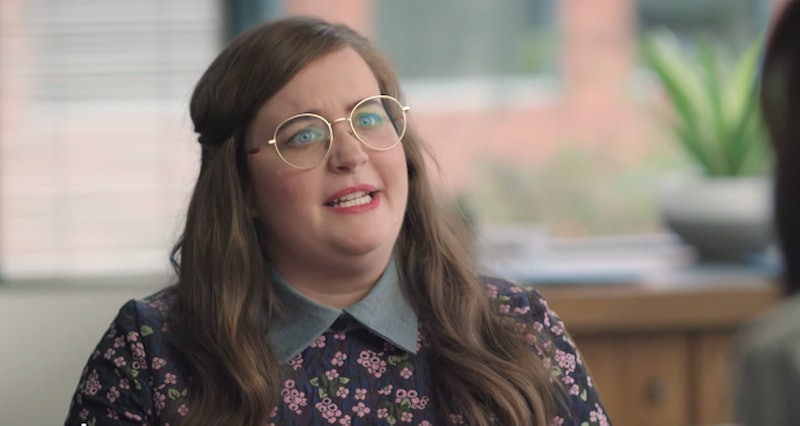 Aidy Bryant may be the queen of comedy on Saturday Night Live, but in the trailer for Shrill Season 2, her character, Annie, is shown taking a serious stand regarding her life choices. For starters, she is done being everyone's doormat and is determined to be the person she actually wants to be. She may not exactly know what that is yet, but she's figuring it out — and she's doing it on her terms.

However, the path to self-discovery — while extremely admirable — is actually a lot more difficult than she may have initially realized. And even though quitting her job may have felt pretty good at the time, getting back into the work force will prove to be no easy feat. As Annie tells a prospective employer who proceeds to offer her an unpaid internship: "That sounds so nice, I just also need money." The struggle is very, very real.

But life isn't all bad. Seeing Annie bask in her own self worth and enjoy being a "bad girl" for a change is a true joy to behold. And with the help of her family and friends, including her hilarious roommate, Fran, she's sure to figure things out eventually.

Annie's boyfriend, Ryan, also makes several appearances throughout the teaser, indicating that the two of them are still going strong. (You know, despite the fact that they almost had a super awkward run-in with a boy scout troupe.) But it'll be interesting to see if their relationship is able to withstand the test of time.

According to a press released provided to Bustle, Annie may start to have some doubts about their romance. "Annie starts the season feeling pretty good with boyfriend Ryan by her side," the press release reads. "That is, until she realizes that hastily quitting her job and jumping into a relationship with someone who is, well, a little less career-focused may not have been the best idea." So it sounds like Annie will be facing her fair share of challenges on both a professional and personal level.

That being said, even though the problems she'll face are very serious (and highly relatable), the show's eight-episode second season — which is slated to hit Hulu on Jan. 24 — looks to be filled with plenty of light moments as well that are guaranteed to make you laugh out loud. But that's not all that surprising, given that everything Bryant touches turns to comedic gold.

More like this
'The Queen’s Gambit' Season 2 Tweet Wasn’t From Anya Taylor-Joy
By Mary Kate McGrath, Jack Irvin and Grace Wehniainen
Netflix Shut Down 'Bridgerton' S3 Rumours About A “Very Dark” Storyline
By Bustle
'The Crown' Season 6 Has Suspended Filming "Out Of Respect" For The Queen's Death
By Bustle Staff
Twitter Is Identifying With Sally Field & Jane Fonda’s Friendship In New Viral Video
By Jake Viswanath
Get Even More From Bustle — Sign Up For The Newsletter
From hair trends to relationship advice, our daily newsletter has everything you need to sound like a person who’s on TikTok, even if you aren’t.