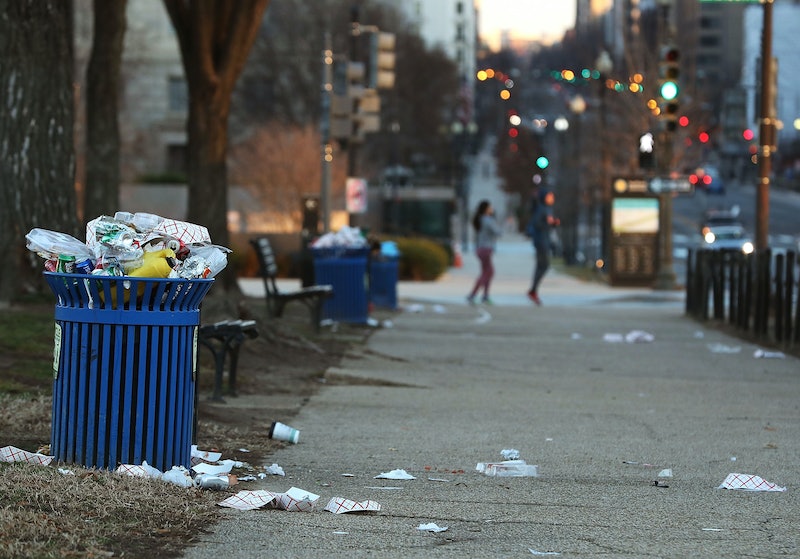 Not every state is equally hurt when the government closes. Some have higher percentages of federal workers or a greater dependency on suspended services, for example. But which states are most affected by the government shutdown largely depends on which areas employ more people from the Departments of Agriculture and the Interior, as The New York Times reports. The effects aren't falling neatly along partisan lines, either.

The Interior Department manages many parks, preserves, and wildlife refuges in Alaska, for example. The New York Times' map shows the number of federal employees affected by the shutdown per capita, and after the capital city, Alaska leads the pack. Then comes Montana, Maryland, Wyoming, New Mexico, and South Dakota. Idaho, West Virginia, and Virginia follow shortly behind.

Unsurprisingly, it seems some of the most affected states are home to the residents who are most closely following news about the shutdown — or at least, they're Googling "government shutdown" most frequently. Google Trends data shows that the "subregions" of the United States that have most heavily searched that term in the past week have been DC, Maryland, Virginia, New Mexico, and Alaska.

As The Times notes, there isn't a simple correlation between the members of Congress who are fighting the shutdown and the states that are hit hardest. Alaska's Sen. Lisa Murkowski has been pushing to reopen parts of the government, for example, but Wyoming's Sen. John Barrasso has continued to insist that the president's demands for wall funding must be met first. Both are Republicans. Of the five states that have been hit hardest by the shutdown — per The Times map — two have Republican senators, two have Democratic senators, and Montana has one of each.

Kentucky seems to have relatively few workers affected. Its best-known representative, Senate Majority Leader Mitch McConnell, is one of the main figures (besides President Donald Trump) who Democrats are blaming for the shutdown. He has refused to bring a bill to fund the government to the floor, even as the House moved to pass individual packages to fund closed departments.

Because of this, there's no end in sight for the shutdown. Trump met with congressional Democratic leaders on Wednesday but abruptly walked out of the conversation, reportedly calling it "a total waste of time." He is refusing to sign any appropriations bill that comes to his desk unless it includes wall funding.

Trump has said that he's willing to keep the government closed for "months or even years" unless he gets money for the wall. If the Republican-led Senate wanted to, though, it could use a veto-proof majority to pass a bill without wall funding. The New York Times reports that pressure is building on Senate Republicans to do just that.