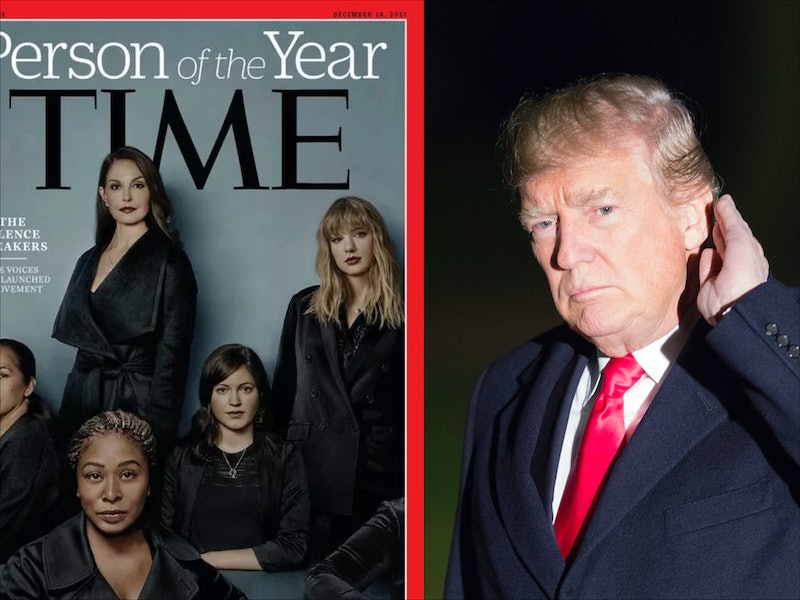 Too often in the past year, women have felt powerless against Trump's White House. He took away our right to affordable birth control. He robbed transgender women (and men) of the right to serve their country. He rolled back protections for women that had been mandated by Title IX and Title X. Finally, on Wednesday, women were granted a small victory: On the TIME Person Of The Year list, one of the few spheres in media that the president takes seriously, women beat out the president to claim first place.

The Silence Breakers taking the top spot over Trump is not just a moral victory. There are precious few arenas in which Trump allows himself to feel humiliated — not when he picks a fight with a Gold Star widow, not when his approval ratings are at rock-bottom, not when his speeches are littered with false statements. Trump, however, cares deeply about who is named TIME's Person Of The Year.

The president has tweeted about the competition every year since 2012, at least. Perhaps in anticipation of not claiming the title this year, he rushed to his own defense with a pre-emptive tweet last month:

Time Magazine called to say that I was PROBABLY going to be named "Man (Person) of the Year," like last year ... I said probably is no good and took a pass.

TIME had a different story.

The only other kind of media that Trump seems to take seriously is Fox News Channel's Fox and Friends, which the president tweets about regularly. No matter the outrage from late-night talk show hosts, the country's foremost publications, or even right-leaning outlets, Trump seems to possess an ability to shrug each and every media critique off as "fake news." Back in July, The New York Times even published a piece entitled: "Want to Get Rid of Trump? Only Fox News Can Do It."

Outlets like Fox News and TIME, then, possess a power that few other organizations have when it comes to influencing the president. TIME has been careful to keep Trump on side, maintaining consistently that its competition was for the year's most influential newsmakers, and has no moral compass. Until Wednesday morning, many people, including Trump himself, suggested he could still win.

This tension made Wednesday morning's victory even sweeter. Trump is notoriously sensitive to criticism from individuals and outlets he takes seriously, and in private probably did not take the defeat well. Meanwhile, for women, after a year filled with loss and frustration, the thought of the president simmering over being beaten by women — women! (to add insult to injury, the same women he's derided at every opportunity!) — is a joy.

Not only was Trump not named Person Of The Year, he was only named in the winners' article as a cautionary tale. Used only as one example of the many, many men who have been named by women as a serial predator, Trump is not even characterized in the piece as a main villain. He's just another "loser" to this small army of women.

Although Trump is hardly mentioned in the winners' piece, he does claim second place — a decision that, for some, makes the win less poignant. It's a sharp return to reality: After all, if a man who has been accused of sexual harassment and abuse a total of 16 times still occupies the Oval Office, then sexual abuse survivors' "victory" feels hollow. What kind of feminist victory can survivors claim, if a man who once admitted to grabbing women "by the pussy" remains the most powerful figure in the Western world?

To play devil's advocate, TIME's list is intended to highlight one factor alone: The most newsworthy person, or persons, of the past year. That doesn't mean, however, that it's easy for women, who have been left shaken and shattered by the past year, to see Trump's name directly next to that of women who have risked everything to raise the alarm about men just like Trump.

Is it a moral victory? Yes. Is it also a hollow victory? Yes. TIME's crowning of The Silence Breakers is a joyful moment for anyone who has ever felt threatened and undermined by Trump, his administration, and/or the men around them. Like the Women's March, it's a platform for us to see each other, to praise each other, and to commit to standing by one another.

What is it not is lasting change. It is not a criminal investigation, or impeachment proceedings, or a meaningful legislative victory. It may feel sweet for a moment — and it should! We deserve this! — but we still face an uphill battle. And perhaps that is best exemplified by Trump taking second place: Women are fighting hard, and we're winning, and yet the threat of Trump is behind us always.