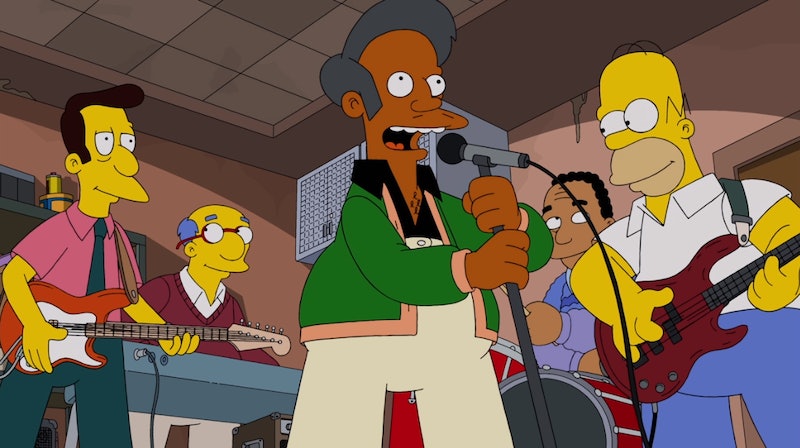 In a move toward more accurate racial representation, Fox's The Simpsons & Family Guy are recasting white actors who currently portray non-white characters. "Moving forward, The Simpsons will no longer have White actors voice non-White characters," a rep for the longest-running sitcom said in a Friday, June 26 statement to The Hollywood Reporter. The same day, Mike Henry, who has voiced Family Guy's Cleveland Brown since 1999, announced he's ending his run as the animated series' main Black character.

"It's been an honor to play Cleveland on Family Guy for 20 years," Henry tweeted on June 26. "I love this character, but persons of color should play characters of color. Therefore, I will be stepping down from the role." Although he didn't make a statement of his own, creator and costar Seth MacFarlane retweeted the post.

Despite broadcasting new episodes for almost 31 years, The Simpsons resisted calls for a South Asian actor to replace Hank Azaria as Kwik-E-Mart owner Apu, whom comedian Hari Kondabolu focused on in his 2017 documentary The Problem With Apu. In January, however, Azaria announced he'd stop voicing Apu. "We all made the decision together," he said. "We all agreed on it. We all feel like it's the right thing and good about it."

The animated shows follow Netflix's Big Mouth and Apple TV+'s Central Park in recasting mixed-race characters with Black or biracial actors. Jenny Slate, who's played Missy on Big Mouth since 2017 announced her decision to step down from the role in a June 24 Instagram post. "At the start of the show, I reasoned with myself that it was permissible for me to play 'Missy' because her mom is Jewish and White — as am I," she wrote. "But 'Missy' is also Black, and Black characters on an animated show should be played by Black people."

The same day, Central Park announced that Kristen Bell will no longer voice the biracial character Molly. "This is a time to acknowledge our acts of complicity. Heres 1 of mine," Bell, who will be recast in a new role, tweeted on June 24, along with an official statement from the show's creative team. "Playing the Molly in Central Park shows a lack of awareness of my pervasive privilege. Casting a mixed race character w/a white actress undermines the specificity of the mixed race & Black American experience."