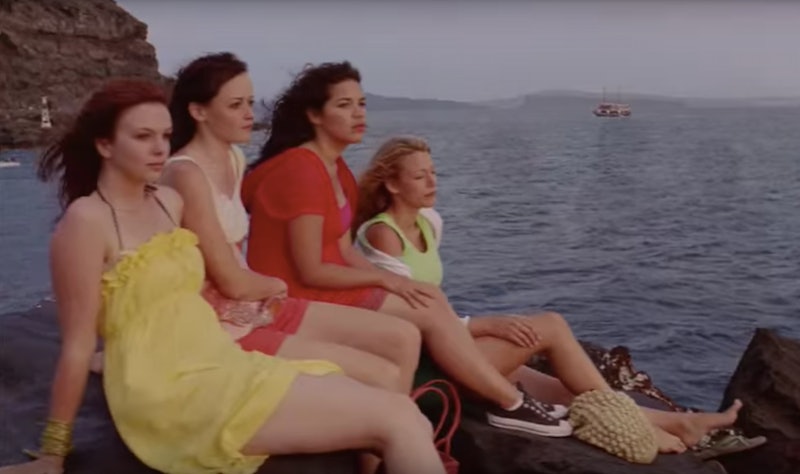 There's nothing that could make this movie more timeless... until now. In a new interview with Us Weekly, Amber Tamblyn talked about The Sisterhood of the Traveling Pants cast's playdates and bringing their friendship to the next generation, and it's so sentimental. Since bonding when working on the 2005 film, Tamblyn, Blake Lively, America Ferrera, and Alexis Bledel have been there to support one another in the biggest days of their lives. Life has imitated art through these four women, and it can continue to do so in this super heartfelt way.

Now that the women are grown up and having babies of their own, Tamblyn joked to Us Weekly that perhaps they can start a new bond with a brand-new set of pants. Well, more like baby jeggings. "We’ll have to get the tiniest pants you’ve ever seen in your whole life," the actor said. Tamblyn, mom to 1-year-old daughter Marlow Alice Cross, already has the ball rolling. "I actually did buy my daughter her first pair of jeggings. She’s only one but I did think about that," she said. "The pants are happening all over again, another generation."

Tamblyn's suggestion comes just a few months after the gang reunited to celebrate Ferrera's first pregnancy with her husband Ryan Piers Williams. Ferrera posted a photo with her friends touching her belly with the caption, "Starting the New Year off with blessings from my Sisterhood. We’ve got work to do for the next generation." This is already shaping up to be the coolest baby squad that ever existed.

Who knows? Maybe the next generation sisterhood will become co-ed. While Lively has two daughters, James (3) and Ines (17 months) with Ryan Reynolds, Bledel has a baby boy (nearly 2) with husband Vincent Kartheiser, and the sex of Ferrera's first baby is being kept under wraps. These kids already have one thing in common: their badass moms.

Sisterhood and its 2008 sequel chronicled the story of four young women navigating the ups and downs of life while on respective journeys to their own self-discovery. It's been so precious to watch this continue in real life through the years. They've been together through pregnancies, marriages, work endeavors, and even keep up with each other through a group text.

"It’s a very special bond that we have. We’re very proud to be friends," Tamblyn told Us in her recent interview. "It’s usually sharing old pictures of ourselves, like from the first movie when I had like purple streaks in my hair and Blake used to crimp her hair and like Alexis looks exactly the same... Just us looking at it going, ‘Oh my dod, terrifying how much we’ve all changed.'"

Not only did the Sisterhood crew attend each other's weddings, but Ferrera spoke at Tamblyn's wedding to David Cross and Lively helped her pick out the dress. In 2016, Tamblyn and Lively spent New Year's Eve cozied up together and the following year, the women supported Tamblyn at her directorial debut premiere in NYC. (As well as the 2009 publication of Tamblyn's book of poetry, Bang Ditto.)

Last year on New Year's Day, Lively posted a screenshot of she and Tamblyn together FaceTiming Ferrera. The caption read, "This year has taught us a lot. But it's reminded us to practice something we've always known... 'Love your pals. Love yourself.'"

As if their bond wasn't cute enough, all women have expressed enthusiasm to return to the big screen for a third installment of Sisterhood. "If we could do movies together for the rest of our lives I think we would," Tamblyn recently said to Us. In 2016, Bledel said they were working on another film. "We would all love to do it. I think it would be so much fun, and we talk about it," she told Jimmy Fallon. "And I think we should absolutely do it. We’re working on it, so we’ll see if it happens."

Whether or not a third film comes to fruition, let's hope the future sisterhood is at least documented on social media — even if they are in diapers.