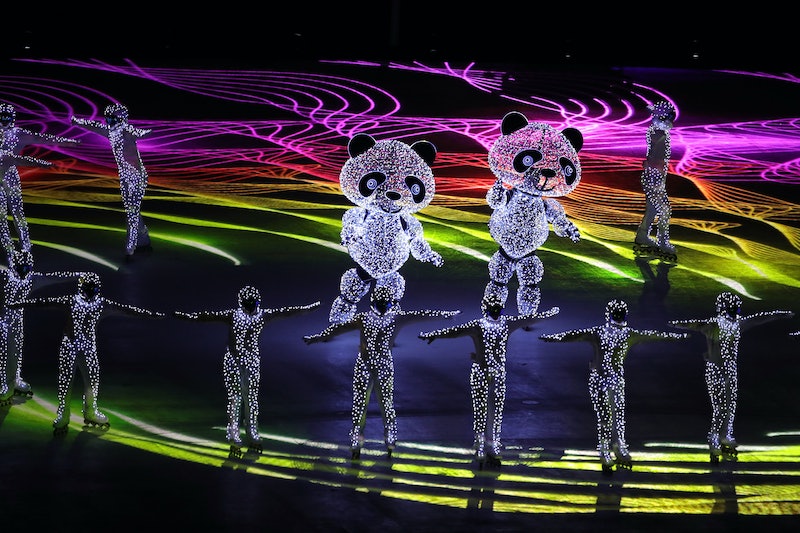 Though the 2018 Winter Olympics in PyeongChang, South Korea was all about the athletes, the dancers were a crowd favorite during both the opening and closing ceremonies. After the Winter Olympic flag was handed off to Beijing, the next host of the 2022 Winter Olympic Games, the Chinese capital put on a spectacular performance to preview all that they plan to have in store for Beijing 2022. The most unique and memorable part of the whole performance? In addition to clips featuring people all around China smiling and exclaiming "See you in Beijing in 2022," the performance featured dancers dressed up as skating, glowing panda bears who danced, twirled, and even flew in the air at one point. Unsurprisingly, people were super into the performance — how could anyone not be, they were glowing pandas — and the robot-like pandas became the instant hit of the closing ceremony. Even NBC's 2018 Winter Olympics closing ceremony commentator Johnny Weir loved the pandas, and exclaimed the moment they appeared, "pandas!" (Later, when asked about his favorite part of the ceremony, Weir delivered what was possibly the best line of the entire 2018 Winter Olympic Games : "Those pandas are brave, and those pandas work hard.") Of course, many folks took to social media to express their excitement over the pandas, of course: In fact, tons of people noticed that the skating pandas looked a lot like they were straight out of the classic '80s film Tron, what with their lit-up frames and the colorful backdrop illuminated throughout the stadium.

While initially it seemed like the pandas were gonna go more the direction of Left Shark, who became an internet sensation after Katy Perry's performance at the Superbowl halftime show in 2015, it quickly became clear that whoever planned this particular segment of the closing ceremony may have recently watched the 1982 film about a video game creator who is transported to a digital reality. Because, honestly, the Tron comparison is spot on: The performance was colorful, complete with glow-in-the-dark costumes, and China's dance performance reminded many people of the older film. Of course, Tron didn't feature any skating pandas, but... well, you get the idea.

Once the performance began airing, tweets comparing the performance to Tron were nonstop. Honestly, if there is gonna be another Tron sequel, can Disney take note of this and add pandas? Thanks.

Tron, Is That You?

Can someone get these Tron pandas a gold medal ASAP?

It Was An Aesthetic To Admire

Is It Not Beautiful?

A combo that you're upset you didn't of first.

Aka now so much better than the original.

You have officially won the Olympics forever.

It's The Tron Sequel You Totally Deserve

You just didn't know it until now.

Twitter users also expressed their hope and speculation that the Tron-like pandas would be a running theme carried into the 2022 Winter Olympics set to be held in Beijing.

See you in four years!

You and me both, Kris.

It's A Theme We Can All Get Behind

I am here for it.

Already Living For The Pandas Of Olympics 2022

There's no denying China's performance with panda dancers during the closing ceremony in PyeongChang made an impression on the crowd, and the internet. Hopefully, the panda dancers will indeed perform again during the next Winter Olympic games — we're already obsessed with them!