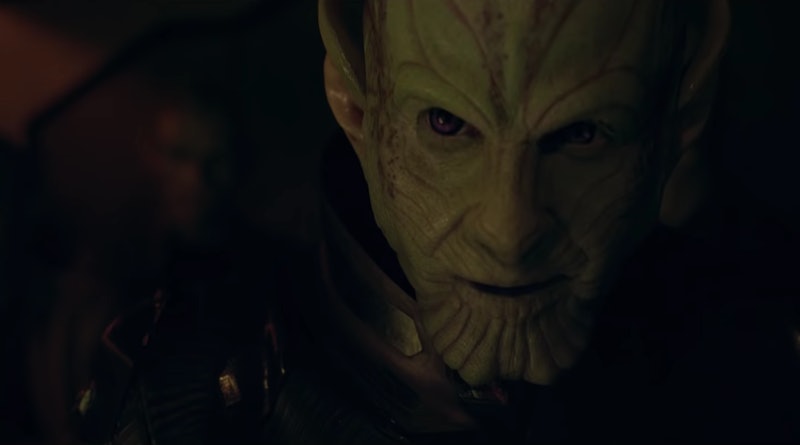 In the first Avengers, the newly assembled group has to battle an alien invasion of Earth. But in Captain Marvel, some of the action returns to outer space, since the movie deals with one of the most important and influential wars from the comics. That would be the war between two alien races, the Kree and the Skrulls. While the Kree have appeared in the MCU already, in both Guardians of the Galaxy movies and Agents of S.H.I.E.L.D., the other race are just now making their onscreen debut. And the Marvel comics history of the Skrulls shows that they're not easily defeated — by anyone.

As you probably can tell from the two full Captain Marvel trailers, the Skrulls are pretty terrifying just based on the way that they look. In their original form, Skrulls have green skin, pointy ears, and ridged chins — but the race can shape-shift to take on the appearance of humans while on Earth. So you won't always know when you're seeing a Skrull in Captain Marvel.

The latest trailer for Captain Marvel, released in December, shows Captain Marvel getting on a train and finding a gray-haired woman who smiles at her. Seemingly at random, the hero punches the gray-haired woman and the two start physically fighting. Right before that fight, you hear Nick Fury (Samuel L. Jackson) asking, "So Skrulls are the bad guys?" And as you can tell by the way Brie Larson's superhero character attacks a woman — apparently a Skrull — the answer is "yes."

Skrulls, created by Stan Lee and Jack Kirby, first appeared in the Marvel comics in 1962 Fantastic Four #2, per Nerdist. According to Screen Rant, the Skrulls were the first Marvel villains ever created, so it's about time that they make their MCU debut. Carol Danvers, aka Captain Marvel, didn't even make her first Marvel comics appearance until the 1968 Marvel comic, Marvel Super-Heroes Vol. 1, #13, so the Skrulls have an even longer history in Marvel comics than Carol does.

At the beginning of their Marvel comics career, in 1962, the Skrulls impersonated the members of the Fantastic Four, in a story that sounds a little bit like Space Jam. But as expert shape-shifters, the Skrulls didn't have to take over the superheroes' bodies but rather transformed themselves into the Fantastic Four. According to Screen Rant, eventually the real Fantastic Four discovered the imposters and wiped our the Skrulls' memories then turned them into cows. You may want to walk cautiously next time you find yourself next to a farm.

While it's definitely a challenge to identify a Skrull when it has morphed into another being, it's also difficult to locate them, as they Skrulls can basically be found all over space, both in the Andromeda Galaxy and the Milky Way, among other galaxies.

The Skrulls initially started out as the general term for a race of aliens that had three different groups. There were the Eternals, the Normals, or the Deviants. The Deviants, the ones who could mimic other beings and shape-shift into them, eventually wiped out the other two Skrulls and became the surviving group of the evil aliens. Besides fighting amongst themselves, the Skrulls have also battled against the principal superheroes, and superhero teams, throughout Marvel comics history, including the Avengers.

As often as the Skrulls have clashed with the (mostly) human superheroes that you know and love, they might be most notorious for the comics' Kree-Skrull war. The Kree are a different alien race — from which Captain Marvel got her powers. According to Screen Rant, the Kree-Skrull war dates back millions of years, and it usually involves the earth.

While talking with Collider, executive producer Jonathan Schwartz explained that Captain Marvel won't depict the entire million-year history of the Kree-Skrull war, because, y'know, that could take a while. "You’ll see as much as is necessary to get Captain Marvel moving on her story," he said. "It’s a conflict that’s dealt with in a very real way, hopefully without overloading the audience with exposition which we never want to do." It sounds like you can bet on getting a brief synopsis of the Skrulls' lengthy Marvel comics history, then, though some details will probably be changed.

Since the Kree-Skrull war has such a colossal impact on the entire universe, the chances that Carol Danvers gets some help from a few other superheroes in the upcoming '90s-set Captain Marvel movie seem good. Then again, you might get a whole movie about Captain Marvel fighting alongside the Avengers and Guardians of the Galaxy to defeat the Skrull empire in a future MCU movie. With the introduction of such important villains, the possibilities of intergalactic warfare are basically endless.

More like this
What Does Doctor Strange’s Third Eye Mean?
By Arya Roshanian
Everything To Know About Marvel’s 'Thor: Love And Thunder'
By Grace Wehniainen
Wait, Did Wanda Die In 'Doctor Strange And The Multiverse Of Madness'?
By Arya Roshanian
Elizabeth Olsen Is Better Off Without Us
By Chloe Foussianes
Get Even More From Bustle — Sign Up For The Newsletter