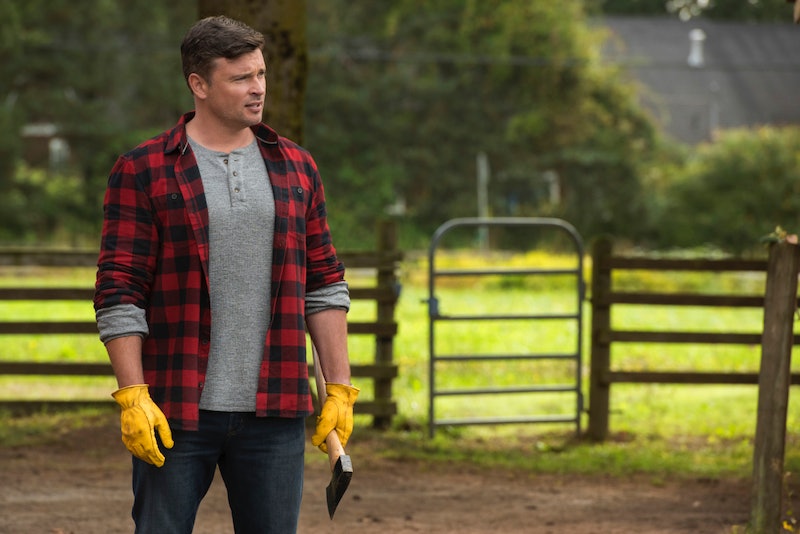 Oliver Queen's death in the Arrowverse crossover may have shaken fans to their core, however, the Smallville twist in "Crisis on Infinite Earths" was equally as shocking, given that the fate of Tom Welling's beloved character wasn't at all what viewers were expecting. Welling's Clark Kent was shown chopping wood in his usual flannel attire, but when Jon Cryer's Lex Luthor busted out the kryptonite, knowing it's always been Superman's one big weakness, Clark picked up the green rock and tossed it away without showing any sign of pain. That's because he permanently removed his powers so that he could live a normal, safe life with Lois (Erica Durance) while raising their two kids.

Lex was shocked to think that someone like Superman would give up his powers just to start a family. It made absolutely no sense to him, but when it came to Arrowverse’s writers like Batwoman showrunner Caroline Dries, the decision was easy and felt completely right. “We had conversations about how to best see Tom again,” Dries told reporters at a "Crisis on Infinite Earths" screening of Parts 1 and 2, according to Entertainment Weekly. “We knew that we really wanted Brandon Routh as Clark Kent in the Daily Planet. I think the Tom Welling Clark Kent that we all kind of picture when we think of him is Clark on the farm. So, it made sense. The farm is still there."

Of course, it made sense to find Welling on the Kent farm, which was where he spent the majority of his time on Smallville. And apparently his muscled physique and top-notch wood-cutting skills are all just part of his permanent human identity — something that Welling himself was eager to explore.

“He was like, ‘I love this,'” executive producer Marc Guggenheim told reporters about Welling's reaction to the twist. “He basically said to me, ‘You guys have basically written the one scene that I can’t say no to,’ which was really really nice.”

Welling himself has yet to speak directly on the matter now that the scene has aired, but it makes sense that he'd appreciate knowing that Clark got the happy ending he always wanted after so many years of saving the world time and time again. However, not all fans shared this sentiment about Clark's fate. Considering that Welling never had the chance to don the Superman suit on Smallville — even for the series finale, which used CGI for the brief shot — many felt the Arrowverse crossover would be the perfect time to rectify that wrong.

Some also just thought it was odd to have Clark's time as Superman come to an end when the whole purpose of Smallville was to watch him grow into becoming the Man of Steel.

At the same time, though, there were just as many people who were pleased with the outcome and felt it was the perfect way to bring his story to a close.

It may not have played out exactly the way you had envisioned, but at least we can all take comfort in knowing that Clark and Lois are still going strong even all these years later.

More like this
Everything To Know About 'And Just Like That...' Season 2
By Jack Irvin and Grace Wehniainen
'Friends' Star Maggie Wheeler Offers Support To Matthew Perry After Reading His Memoir
By Alyssa Lapid
Netflix Shut Down 'Bridgerton' S3 Rumours About A “Very Dark” Storyline
By Bustle
These Brooke Davis Quotes From 'One Tree Hill' Will Never Get Old
By Sabienna Bowman and Jack Irvin
Get Even More From Bustle — Sign Up For The Newsletter
From hair trends to relationship advice, our daily newsletter has everything you need to sound like a person who’s on TikTok, even if you aren’t.