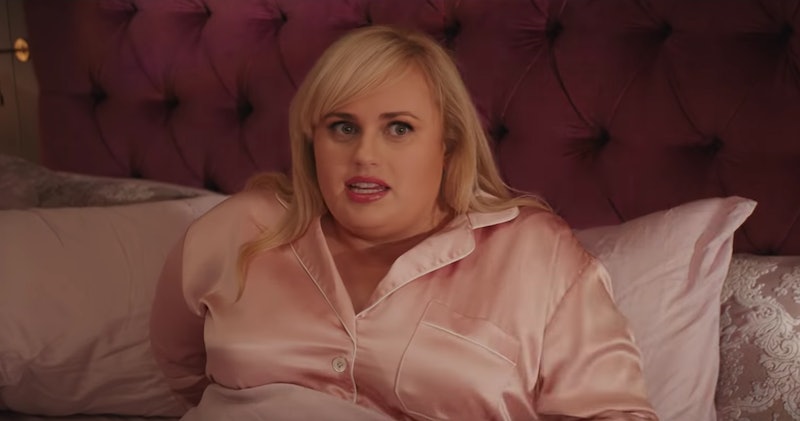 At first glance, Isn't It Romantic seems a lot like 2018's I Feel Pretty, starring Amy Schumer. Both films are about women who get knocked out, then wake up in an alternate reality where they're leading ladies. But I Feel Pretty only involves an internal shift for Schumer's character Renee, while Isn't It Romantic drops Natalie (Rebel Wilson) into a whole new version of her world, which includes every romantic comedy trope ever used and overused. Even though both films conclude that confidence and satisfaction come from within, Isn't It Romantic doesn't focus on its main character's external beauty as much I Feel Pretty does, and the former is a better movie for it. Spoilers for both movies ahead.

Isn't It Romantic is a movie that's distinctively set in 2019, when Instagram models call themselves "yoga ambassadors" and millennial women have decided that the '90s rom-coms they grew up watching only set up impractical expectations for real life. It stars a plus-sized actor, which is still not the rom-com norm, though Isn't It Romantic definitely isn't the first, as its star Rebel Wilson incorrectly purported during an appearance on The Ellen Show and later apologized for on Twitter.

In Isn't It Romantic, Natalie never calls out her appearance as an impediment to her self-esteem or her career ambitions. She doesn't even seem to feel sorry for herself that she most likely won't ever experience a fairytale-like romance, though she does believe that that's true. Wilson's character simply demonstrates a general sense of cynicism that makes her critical of rom-coms, which is completely relatable for all disenchanted millennials who grew to understand that nobody ever actually runs through an airport to stop their unrequited love from boarding a plane. Even if someone wanted to, there's no way they could, what with the TSA being such a rigorous obstacle.

The 2019 comedy isn't about Natalie herself getting a physical makeover — though she does receive a substantial wardrobe update when the rom-com reality kicks in. In fact, everything about Natalie's life gets a makeover, including her surroundings. "It looks like someone's put a beauty filter all over New York City," Natalie exclaims, looking at flower carts and cupcake shops instead of bodegas and corners piled with trash. Instead of being charmed by the change, Natalie sees this glossy, rose-tinted NYC as a living nightmare. She lives in that city for a reason, and it's just not New York City without its flaws.

After her accident, Natalie has a whole new life, complete with a doting real estate mogul love interest Blake (Liam Hemsworth), who she thinks she needs to fall in love with in order to escape her hellish new life. The real Blake appears briefly before her change, treating Natalie disrespectfully during a meeting and appearing to be rather vain and rude, his on-a-dime change sending up the enemies-to-lovers trope that's so popular in the genre.

Still, there are good parts to this new reality, like make-out sessions in the pouring rain, but Natalie runs into other issues, which offer meta-commentary about how problematic certain rom-com storylines are. Brandon Scott Jones plays Natalie's drug-dealing neighbor, who, in the alternate universe, is the gay BFF who has no storyline of his own and whose only purpose in life seems to be providing makeovers and gossiping about the main character's love life.

Once Natalie realizes that she needs to find love in order to escape her rom-com, she approaches the whole thing with winks and eye rolls as if to confirm to audiences that no, this kind of thing doesn't happen in real life. I Feel Pretty, on the other hand, doesn't involve any person or place changing in a physical sense, because the movie aims to encourage audiences that beauty comes from within. The film's overall message suggests that rom-com romance can happen to anyone, if only they believe in themselves.

"I always wonder what it's like to be undeniably pretty," Renee narrates in the movie's trailer, before hitting her head at a Soul Cycle class. When she wakes up, Renee looks at her reflection, which hasn't changed at all, and exclaims, "I'm beautiful!"

Renee starts to approach her life like a person who believes that they're objectively gorgeous, but Schumer fits many common standards of beauty anyway, as a blonde-haired, blue-eyed white woman. When the trailer for I Feel Pretty first came out last February, Twitter users were quick to point out that the plot seemed problematic, considering the privilege someone who looks like Schumer carries. Following that backlash, the actor wrote an essay for Bustle explaining that she'd often struggled with low self-esteem despite all of that.

But the whole movie is an overwrought debate over whether or not Renee is actually pretty, as she's constantly talking about how beautiful she is to people who act as if it's out of the ordinary for her to believe that. Renee's confidence is frequently challenged by her peers, who seem alarmed that a woman like her could possess it. Every character in I Feel Pretty, including Renee, is consumed with her appearance.

At the end of I Feel Pretty, Renee gives a speech about how confidence is internally bred, and that it's possible for a woman who previously thought of herself as "unattractive" by conventional standards can suddenly realize that she is ridiculously gorgeous in her own individualistic way. That's theoretically true, as beauty is subjective, but I Feel Pretty fails to critique the exhausting pressure that society places on women to either be or at least feel pretty.

Both I Feel Pretty and Isn't It Romantic conclude that a woman's ideal life doesn't have to look like a rom-com, but the latter does a much better job of poking holes in why that unattainable life would be unfulfilling in its own right. While living in a manner that would be deemed perfect by rom-com standards, Natalie isn't as fulfilled as she'd already been, when she had the true friendship of her coworkers and wasn't being pushed to abandon her career.

Renee also learns that getting the chance to hook up with a super-hot guy (Tom Hopper) wasn't all that she'd thought it might be in I Feel Pretty, but that living life as a person who believe she's beautiful was definitely for her. Sure, it's great to have confidence in your looks, but there's a lot more to life than the way you perceive your appearance. In fact, focusing too much on it can even have negative effects on society at large, as a 2014 study published in the journal, Organizational Behavior and Human Decision Processes, found that people who find themselves physically attractive tend to be more supportive of economic inequality.

Not that women shouldn't strive to be happy with themselves, but it's worth noting that I Feel Pretty lacks a general awareness of the ways that a superficially-driven society can push people into believing that their appearance and their value as a person are somehow inextricably linked.

Isn't It Romantic, however, maintains that "feeling beautiful" only gets you so far in life. Despite her shinier hair and upgraded wardrobe, Natalie accepts that in order to get out of her rom-com dystopia, she needs to truly love herself enough to go after what she really wants. When she returns to her regular self and the miraculously smelly streets of New York, Natalie decides to ask her coworker and best friend Josh (Adam Devine) out, because she realizes she had been too negative and oblivious to notice before.

Both Isn't It Romantic and I Feel Pretty end with their protagonists renewing their self love and exploring new relationships, so really, neither of them truly will scratch a rom-com hater's itch. But when it comes to a fun critique of the genre with the requisite happy ending, Isn't It Romantic will give you the best of both worlds. I Feel Pretty will just give you a complex.