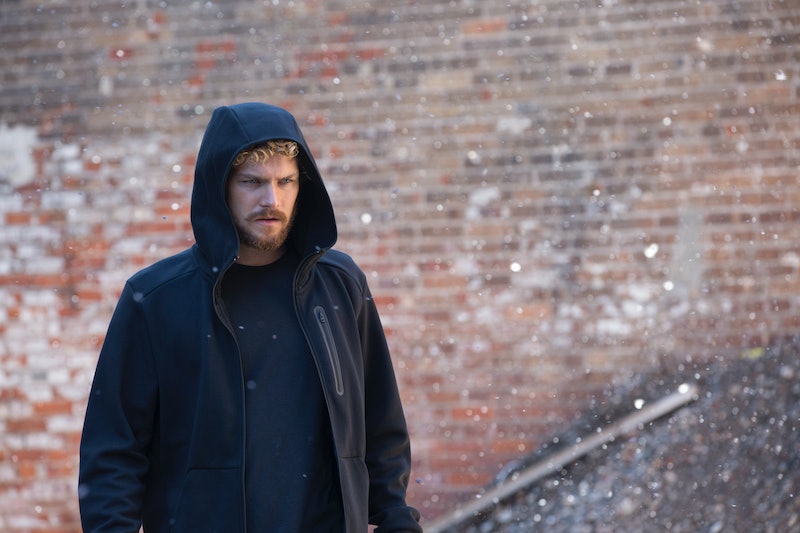 Marvel's long-running love affair with hip hop finally made its way to television through Luke Cage, but Iron Fist is keeping up the tradition in its earliest moments. In the opening moments of the series, "So Fresh, So Clean" soundtracks a decidedly unfresh and unclean Danny Rand re-entering society after years of devout meditation and training. While Outkast provides the most recognizable music cue of the first episode, there's one song in particular that Danny keeps revisiting. The song is hard to hear, and could be mistaken for just another generic song choice with no real effort thrown into it. However, the song that Danny Rand listens to in the park can help viewers understand his state of mind.

The song is titled "Heat of the Moment", but it's not the '80s pop hit of the same title you've heard on classic rock radio. In fact, "Heat of the Moment" by Killah Priest couldn't be further from the hit track that shares its name. This "Heat of the Moment" came out in 2001, which means it was on Danny's iPod the day his plane crashed and he's been listening to it ever since. His love of the song may have something to do with all what Iron Fist has in common with the artist known as Killah Priest.

Killah Priest, a former associate of New York's legendary Wu-Tang Clan, is defined by the many references in his lyrics to spirituality and religion, reminiscent of Danny Rand's reliance on meditation and his own spirituality to channel his Iron Fist powers. The track's piano-driven beat is also similar to a lot of New York-based hip hop, specifically from artists affiliated with the Wu-Tang Clan.

But that's not the only way the Wu-Tang Clan is connected to the Marvel Netflix universe. Original member Method Man made appearance as himself in Luke Cage, and RZA actually directed Episode 6 of Iron Fist. Danny Rand's own connection to "Heat of the Moment" runs deep with parallels, but it also teases his philosophy and how he's changed since surviving the plane crash that changed his life. On the track, Killah Priest raps:

"Believe I changed, I went with the horse, slept at the pastor's door

Heard the whispers through my enemy's walls

Rode the elevator to the thirteenth floor

Console with Gandhi, since God placed his hands upon me"

Danny Rand is pushing against his past and tempting his own safety by putting himself in dangerous situations, but always seems to persevere. Just as Danny has faced struggles in his life, Killah Priest talks about his own struggles in the past that he had to overcome. Revisiting this song may be its own form of meditation for Danny, who uses it as a reminder that despite the heat of any moment, no one can take away who he truly is.

Iron Fist is clearly continuing Marvel's relationship with hip hop, from the soundtrack's inclusion of everything from big hits by major stars to deep cuts by lesser-known rappers. While Danny Rand may be keeping an emotional distance from people as he tries to integrate himself back into society, knowing what he's listening to on Iron Fist can give insight to his state of mind.

More like this
Yes, You Do Know The Song From The 'Black Panther: Wakanda Forever' Trailer
By El Hunt
Everything You Need To Know About ‘Black Panther: Wakanda Forever’
By Bustle Editors and Radhika Menon
The Meaning Behind Beyoncé’s Song "SUMMER RENAISSANCE" Includes A Special Tribute To Jay-Z
By Alyssa Lapid
The Controversy Around Beyoncé's “ENERGY”, Explained
By Frances Stewart
Get Even More From Bustle — Sign Up For The Newsletter