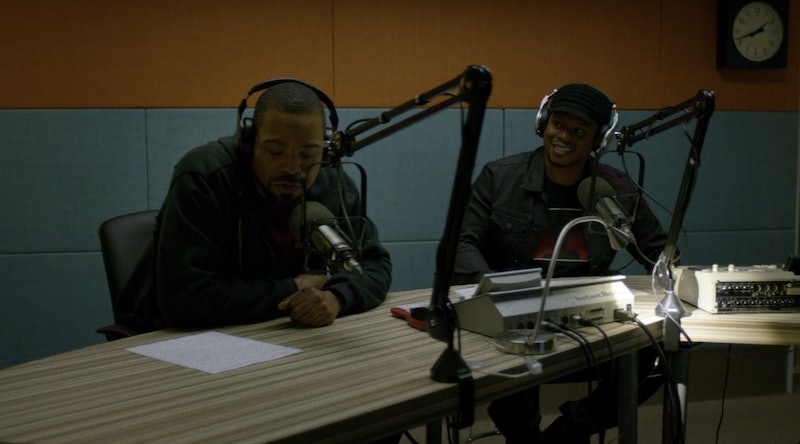 It feels like no more than a week goes by between Netflix dropping new must-see television series, but few are as significant as the streaming service's latest effort, Marvel's Luke Cage. The newest Marvel franchise to find a home on Netflix alongside fellow Defenders Daredevil and Jessica Jones, Luke Cage feels like not only a welcome addition to the superhero lineup but an important voice in a tumultuous time. In a year filled with the shootings of unarmed black men and women and racism spewing from the alt-right, a series centered around a bulletproof, hoodie-clad black man resonates in a major way and this is the focus of Method Man's rap in Luke Cage Episode 12.

Method Man's appearance in the series is both a welcome cameo and a shout-out to two black icons who have influenced each other. As part of the Wu-Tang Clan, Method Man took inspiration from Marvel comics and often referred to himself as Johnny Blaze, the main character of Marvel's popular Ghost Rider comics. The Luke Cage series repays the favor to Method Man and the Wu-Tang Clan by prominently featuring music from the Staten Island supergroup. During a chance meeting, Method Man expresses admiration for Luke Cage, just as Luke Cage offers his admiration to Method Man saying that "P.L.O Style was my joint back in the day." After their chance meeting, Method Man takes to a radio show to perform a song in tribute to the Power Man entitled "Bulletproof Love," and the track ties together the fiction of Luke Cage with the realities of racial tensions in 2016 America. You can listen to the version of "Bulletproof Love" from the series' upcoming soundtrack below.

The track itself starts broadly, painting a picture of life in Harlem:

Roaches in the crib, Ain’t got no food up in the fridge

Sway, admit – What kind of paradise is this?

However, after painting the picture of what it's like being poor in a big city, Method Man begins to directly speak on the events of the series so far.

But these snakes is tryna gather in the pit

Where you get a cottonmouth plucking’ ashes off the clip

Off the rip, now a challenger exists

And he bulletproof, shoot, what kind of caliber is this?

Got thugs in the store with the barrel on your lips

Lord, who to call when no one obeys the law

And there ain’t no Iron Man that can come and save us all?

Method Man is here talking about Cottonmouth (the villain of the first half of the first season of Luke Cage) and talking about his challenger, Luke Cage. He also directly recounts the circumstances under which he, in the show, meets Luke Cage — during a bodega robbery. He also points out that Luke seems to be a hero for the average man while Avengers like Iron Man are busy dealing with larger threats. After laying out his feelings about Luke Cage, Method Man goes into what the hero means for the people of Harlem:

Power to the people and Luke Cage the cause

And the cops got it wrong, We don’t think Cage involved

Look, dog, a hero never had one

Already took Malcolm and Martin this is the last one

I beg your pardon, somebody pulling’ a fast one

And bullet-hole hoodies is the fashion

We in Harlem’s Paradise tell the captain

That I’m about to trade the mic for a magnum

Trayvon Martin was one of the first young unarmed black men of the 2010s to receive large media coverage after being killed and the fear of being shot or persecuted for being black and wearing a hoodie like Trayvon runs throughout Luke Cage. Despite having the deck stacked against him, Luke Cage is a hero for the disrespected and unheard voices of Harlem. He is a "Hero for Hire" as Method Man says, referring to one of Luke Cage's original titles in the comics.

While Luke may often be on the run, he's reminded by Method Man that more people support him than the media lets on:

Yeah, cause this is bulletproof love

And you already know what a bulletproof does

So you can take it from a bulletproof thug

The hood got his back, dog

As if being bulletproof and having superhuman strength wasn't enough, Luke Cage also has a member of the Wu-Tang Clan on his side, which surely counts for something in New York City. Who knows, perhaps if there's a second season he'll be joined by the likes of RZA, GZA, or Ghostface Killah on his continued quest to keep Harlem safe.