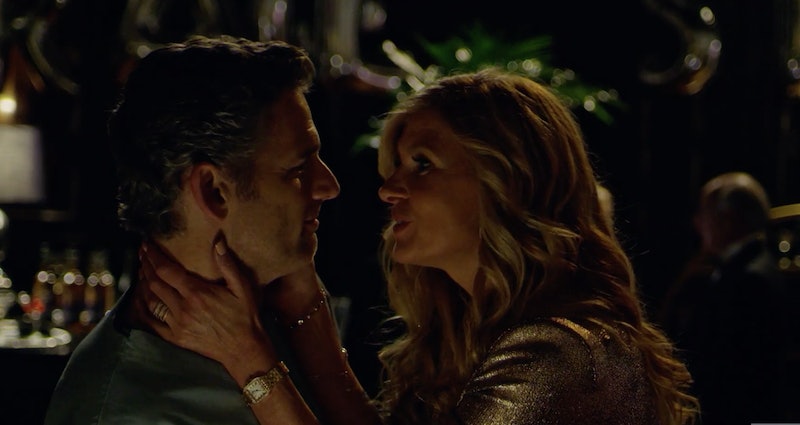 In the immortal words of Britney Spears, "with a taste of poison paradise" Debra Newell was under the spell of John Meehan. So it's only fitting that the song in the new Dirty John trailer is 2WEI's haunting cover of Spears' "Toxic." It basically sums up everything you need to know about the show, which is based on the harrowing true story of Debra Newell, a woman who ended up falling for a toxic man.

Seconds into the new Dirty John trailer, 2WEI's cover of "Toxic" starts to play, and it lets you know that the seemingly charming John Meehan, played by the actually charming Eric Bana, is bad news. The song, rearranged by the composing team of Christian Vorländer and Simon Heeger, who have created songs for the Wonder Woman and Tomb Raider trailers, plays over shots of Debra first meeting John after connecting online. Of course, someone says they'd be scared of online dating and the music crescendoes so that the line "a guy like you should wear a warning" is easier to hear. A knowing wink at what's to come in the limited series, which premieres Nov. 25.

In truth, some of the warning signs might have been there all along, but Newell, a wealthy Newport Beach interior designer, was blinded by love. Dirty John, inspired by Christopher Goffard's true crime podcast and Los Angeles Times report, looks at how Meehan managed to trick Newell into thinking he was a kind and loving doctor, and not the con-man he really was. But, Meehan couldn't trick her family.

What this "Toxic" trailer shows is no matter how good John made Debra feel, her family couldn't help but sense there was something off about him. "There's something wrong with him," Debra's eldest daughter, Ronnie, played by Juno Temple, says. Her mom insists she just doesn't know him well enough yet. But, as Ronnie points out, "You don't know him, at all."

As those who are already familiar with the story of Dirty John know, her family's concerns are valid. And the trailer gives clues as to just what John is capable of. When Debra encourages John to get to know her daughter better, he says, with a straight face, "Either that or I could take her out with a Winchester 30-06 and a thousand-yard headshot."

And it only gets worse from there, possibly even worse than fans of the podcast even knew. When at the Television Critics Association press tour panel in August, the L.A. Times reported that Dirty John showrunner Alexandra Cunningham said the show will go "deeper on the things maybe the podcast just touched on."

To better understand what her character went through, Britton said at the TCA panel that she was able to meet with Newell herself. It was "a really unique privilege" for Britton to sit down with the woman she had been playing. "And also, it's helping to give so much insight into the story in a way that maybe we weren’t able to experience in the podcast," she said.

For those who can't talk to Debra Newell personally about John Meehan, perhaps, just listening to Britney Spears' "Toxic" is a good reminder of just how bad he was.

More like this
The 'Love, Lizzo' Harry Styles Scene Is Just 1 Moment That Made Fans Feel Seen
By Brad Witter
Mariah Carey Is "So Proud" After Her Kids Joined Her In The Thanksgiving Day Parade
By Stephanie Topacio Long
Kim K Is Putting Kanye’s Memorabilia — Like Grammys & Clothes — In A Vault
By Jake Viswanath
Here’s How 'The Crown' Will Cover Princess Diana's Tragic Death In Season 6
By Brad Witter
Get Even More From Bustle — Sign Up For The Newsletter