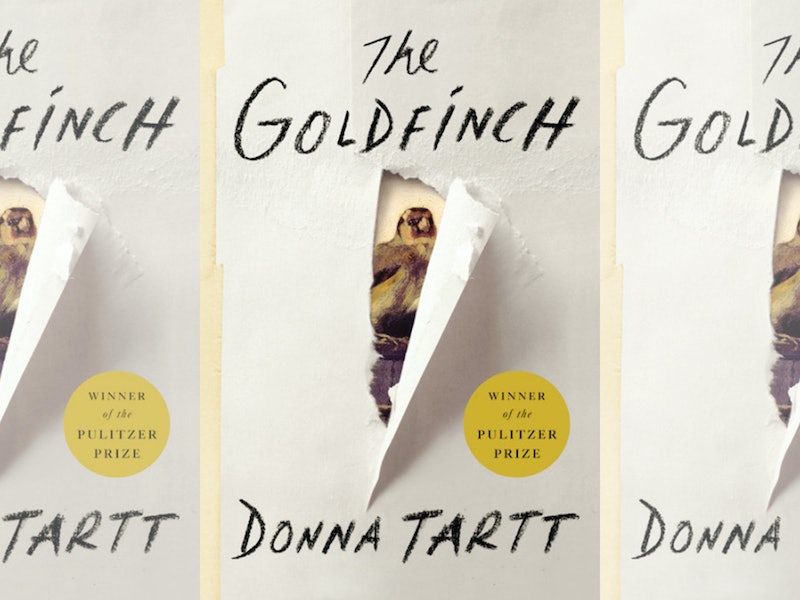 Donna Tartt’s Pulitzer Prize-winning novel The Goldfinch begins with Theo Decker, the protagonist of the sprawling novel, saying he dreamed of his mother for the first time in years. It’s an opening sentence fitting of the story, which follows Theo after his mother’s untimely death in a terrorist attack. From the very start, the novel seemed destined for its big screen adaptation, which is set to release in October 2019.

The film adaptation seems promising; it boasts an Oscar-nominated director (John Crowley of Brooklyn) and a star-studded cast that includes Ansel Elgort as Theo, as well as Nicole Kidman, Sarah Paulson, Jeffrey Wright, and Finn Wolfhard. But the major question that remains is the same question asked whenever a beloved novel faces a big screen adaptation: How much of this book's soul will be maintained and how much will be lost in the adaptation process? To answer this question, one must get to what is really the soul of the book.

The inciting incident of The Goldfinch is Theo’s mother’s death. Theo is a character that sees everything through a lens of 'But what if my mom was alive'. And while Theo's grief and his memories of his late mother play a major role in the novel, this is not to say that they are to be taken at face value.

The Goldfinch by Donna Tartt, $20, Amazon or Indiebound

Theo remembers his late mother as being brilliant and gorgeous and charming and literally so perfect that everyone in New York City knew it to be true — except for Theo’s father, who abandoned their family. It's not quite so black-and-white, however: Theo’s memories are distorted by his grief, guilt, and love for his mother. Throughout the novel, Tartt leaves clues for readers, signaling that Theo’s mother was more human than saint.

Almost immediately, Tartt begins juxtaposing Theo’s memories of his mother with the realities of her life. In the first passage about Theo’s mother — the fateful trip to the museum on the day it was targeted by terrorists — Theo remembers her as a whimsical, fragile creature who was prone to carsickness, making small talk with strangers, and becoming lost in her thoughts right in the middle of a New York City sidewalk. These memories of Theo’s mother are pitted against his tangible, physical memories of his hunger — the deep, deep hunger of his 13-year-old boy's body. Only, in reality, Theo’s mother doesn’t feed him or even notice his hunger. She does offer him a stick of gum, but that’s it. This isn't to say she was an awful mother, but it serves as evidence that contradicts Theo’s sentiments of her perfection, which are built more on Theo’s abstract memories influenced by his affection. Theo remembers his mother as a near perfect caregiver, but his palpable memory of hunger serves as a subtle objection.

The gap between Theo's memories of mother and the reality of her is most apparent in a scene that involves a man named Mr. Bracegirdle, with whom the mother set up a fund for Theo's education. During a conversation with Theo, Mr. Bracegirdle mentions that a certain restaurant his mother loved has closed. At this point, Theo wonders how Mr. Bracegirdle — supposedly just a business associate of his mother’s and, on top of that, one of which Theo hadn't known — would have knowledge about his mother's preferred restaurants. This question prompts Theo to eye the surroundings of Mr. Bracegirdle’s office, at which point there are particular books that remind Theo of his mother. Theo even wonders if Mr. Bracegirdle had gifted his mother a rare book she owned and remembers how his father had insinuated his mother had her secrets, and possibly had an affair.

Theo only considers the extent of Mr. Bracegirdle’s relationship with his mother momentarily, and this is the brilliance of Tartt’s writing. In another book, this may have been something with which a character would wrestle, becoming a subplot that culminates in a confrontation. This subplot and conclusion have no place in Tartt’s novel. Tartt is a writer keenly aware that Theo, forever emotionally stunted by the loss of his mother, would refuse to dwell on the possibility of her having had an affair or a flirtation. Such information would shatter his illusion of her. This scene exists to be disregarded by Theo and observed by readers, who may then draw their own conclusions about Theo’s mother and Theo's memories of her.

It’s moments like this, in which Tartt tactfully allows her readers to discover that Theo’s perception of his mother is incomplete and his memories of her may not necessarily be accurate, that elevate The Goldfinch’s portrayal of grief. To misremember a deceased person out of love for them is deeply, painfully human.

On the surface level, what the novel seems to be about — the soul of the novel, if you will — is Theo and his relationship to his dead mother. At its core, the novel is most interested in exploring illusion, particularly the illusions we indulge due to grief.

This complexity of emotion may be difficult to translate to the big screen, but including this deft portrayal of grief in the film would firmly preserve some of the novel's soul in the film adaptation, allowing film audiences to experience the same intricate grief that readers of the novel experience through Tartt's sharp prose.