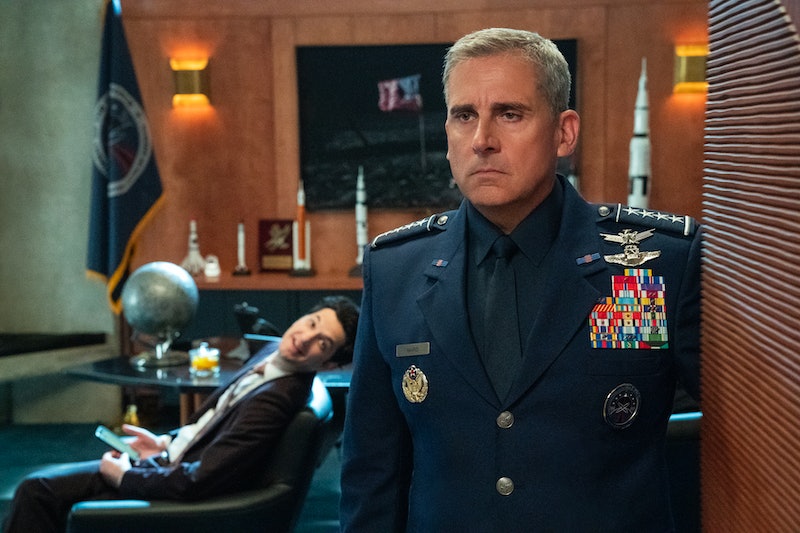 Michael Scott is going to space — kind of. Netflix's Space Force trailer shows Steve Carell land a promotion from world's best boss (as on The Office) to the galaxy's best boss. No, he's not reprising his role as Michael Scott again, but unless a full-fledged reboot of The Office happens in the distant future, this is as close as you're going to get.

The highly anticipated new comedy series, developed by Carell and The Office creator Greg Daniels, focuses on four-star general Mark R. Naird (Carell), who hopes to land a position running the Air Force, but is unexpectedly selected to lead the new sixth branch of the US Armed Forces: Space Force. After moving to a remote base in Colorado, things quickly turn to unbridled chaos, as Naird has to manage a "colorful" team of scientists and "Spacemen" — and a rebellious teenage daughter — in order to make men walk on the moon again.

Netflix described Space Force as "a new kind of workplace comedy, where the stakes are sky high and the ambitions even higher." So basically, imagine a slightly more competent Michael Scott as he attempts to carry out the President's mission of protecting satellites and the internet (yes, really) while transforming astronauts into the next Neil Armstrongs.

One may think that the series was inspired by the real-life Space Force branch of the U.S. Armed Forces that was recently formed by Donald Trump, but in actuality, politics had little to do with the show's well-timed conception. As Carell and Daniels explained in Netflix's oral history of the show, Space Force was born "in a rather atypical way" based on the premise of just its title.

"There was no show, there was no idea aside from the title," Carell explained. "Netflix asked, 'Do you want to do a show called Space Force?' And I pretty much immediately said, 'Well yeah, sure. That sounds great.'" When the actor called up Daniels, he had the same reaction and basically signed on for the title alone. "It was really based on nothing, except this name that made everybody laugh," he said.

Given that Space Force seems to be an extremely extra version of The Office, but set in space rather than the Dunder Mifflin Paper Company, it's sure to make viewers laugh as well.