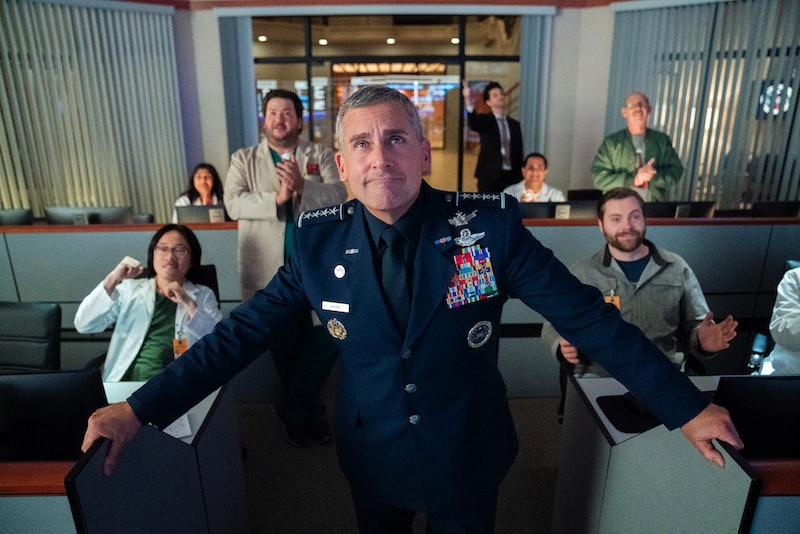 In an update that is truly (or hopefully) out of this world, Steve Carell’s Netflix series Space Force officially has a premiere date. Set to debut on Friday, May 29, Space Force will follow a decorated pilot named Mark R. Naird (Carell) who uproots his life after he’s tasked to lead the Space Force, a newly-formed sixth branch of the U.S. Armed Forces. The workplace comedy, which may or may not have been inspired by Donald Trump’s Space Force initiative, reunites Carell with The Office writer Greg Daniels.

Co-created by Daniels and Carell, Space Force will also star Ben Schwartz, John Malkovich, Diana Silvers, Jimmy O. Yang, Noah Emmerich, Alex Sparrow, and Don Lake as Mark’s eccentric team of scientists and “Spacemen” who are tasked by the White House to get “American boots on the moon (again)” and achieve “total space dominance,” per its synopsis. Netflix also announced on Wednesday that Friends alum Lisa Kudrow has been cast in a recurring role as Maggie Naird, Mark's Air Force wife who inevitably grows in a “different direction.”

In first look photos released on Wednesday, viewers get a glimpse of the team working under Carell’s Mark R. Naird. Kudrow looks presidential in a blue dress, while Schwartz invokes his Parks and Recreation persona Jean-Ralphio Saperstein.

Almost as exciting as these new photos is the news that, per Deadline, the new series was not impacted by production shutdowns due to the global coronavirus (COVID-10) pandemic. Space Force already completed filming prior to the health crisis, meaning fans will get to see Season 1 start to finish.

The premiere date news comes after Carell virtually reunited with his former Office co-star John Krasinski on March 30 to celebrate The Office’s 15th anniversary. Carell appeared on Krasinski’s “Some Good News,” a YouTube series intended to lift spirits during the COVID-19 pandemic, and marveled at the show’s popularity today. “It’s such a happy surprise that after all these years people are still tuning in and finding it today,” Carell said. “It’s pretty cool.” Of his favorite Office moments, Carell added, “I think most of the memories have to do with things that we shared as a cast — when we were doing Fun Run and it was about 105 degrees outside.”

The former co-stars also touched on reunion rumors. “Listen, I know everyone’s talking about a reunion,” Krasinski said. “Hopefully one day we just reunite as people, and just all get to say hi.” While an Office reunion may not be in the cards at this moment, Carell’s Space Force sounds like the next best thing.