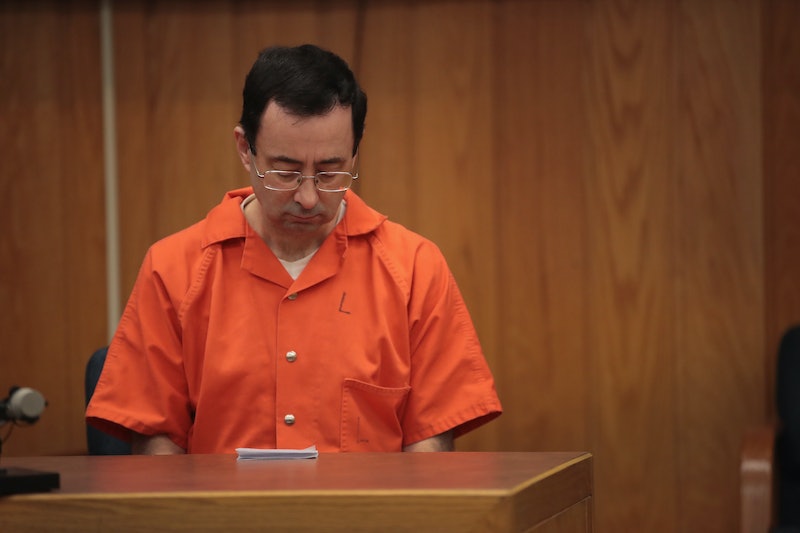 Earlier this year, Larry Nassar was sentenced to up to 175 years in prison after more than 300 girls and women accused of him of sexual abuse during his tenure as a USA Gymnastics and Michigan State University doctor. Shortly after his sentencing, Michigan's attorney general appointed a special prosecutor to investigate MSU's role in the Nassar scandal. According to BuzzFeed News, the subsequent investigation conducted by special prosecutor Bill Forsyth revealed that MSU had effectively protected Nassar through misleading statements and documents.

On Friday, Forsyth told reporters that MSU had attempted to "stonewall" an investigation into Nassar, ESPN reported. According to Forsyth, MSU officials provided investigators with numerous irrelevant documents — concerning everything from the university's bed bug policy to restaurant coupons — and issued misleading public statements. These unrelated materials, many of which included heavily redacted content, consequently made it difficult for investigators to discern who actually knew about Nassar's abuse and what they did about it, Forsyth said.

“An institution truly interested in the truth would not have acted as MSU has,” Forsyth wrote in his report, per the Lansing State Journal. “For as long as MSU frustrates the search for the truth, we will never be fully confident that we have it."

The attorney general's investigation into MSU revealed that 11 MSU employees failed to report Nassar's abuse upon learning about it, BuzzFeed News reported, and three former university officials have had criminal charges filed against them.

Even as his investigation uncovered just how much MSU had protected Nassar, Forsyth told reporters that Nassar still believes he didn't do anything wrong, according to BuzzFeed News. During his trial, Nassar told his accusers that their words had a "significant emotional effect" on him. During interviews with Forsyth and his team, however, Nassar reportedly said that his actions "should have been handled as a medical malpractice case," prompting Forsyth to describe Nassar's remorse as a "farce."

"Finally, and contrary to his sworn statement at the time he pleaded guilty, he was adamant that all of his 'treatment' was done for medical purpose, not for his own pleasure," Forsyth wrote in his report, per BuzzFeed News.

Forsyth also told reporters that Nassar only pleaded guilty because he lost both his medical license and the medical community's support following authorities' discovery that he had child pornography in his possession.

After Forsyth and the attorney general's office released a report of their findings, MSU spokeswoman Emily Guerrant issued a statement saying that the university is "is extraordinarily sorry that Larry Nassar was on our campus and has hurt so many people."

At a news conference in Lansing, however, Forsyth said that MSU needed a "top-down culture change" to combat sexual violence in the future.

"I'm sorry that this happened to them," Forsyth said of the people who survived Nassar's abuse. "It continues to happen to them in the sense that they will never know what happened."

Forsyth concluded that MSU's failure to put a stop to Nassar's abuse was due to "people, not policy," and argued that survivors would justifiably remain skeptical of the university's policies.