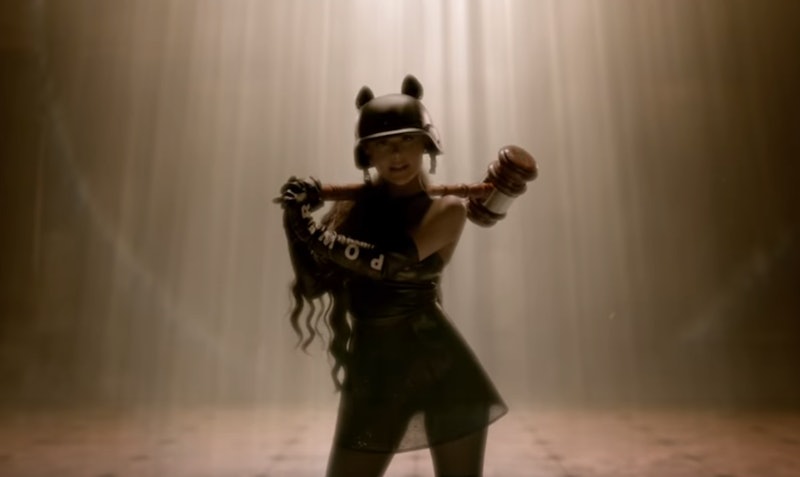 By now, you've probably heard the song, seen the video, and obsessed over the lyrics ad nauseam. Here's a fun fact you might not have caught, though: The speech in Ariana Grande's "God Is A Woman" video, which the singer dropped on July 13, is recited by Madonna — yes, the Madonna. And if its original pop culture context is any indication, as Vulture pointed out, Grande's opposition should be straight-up shook right now. It's a moment, y'all. A big one.

First thing's first: Here's a little background on that now doubly-famous spoken interlude. The passage Madonna quotes (as mouthed by Grande around the 2:23 mark) — Ezekiel 25:17 — is from the Bible. Before you start going to church, though, you should also know that it was used in another iconic pop culture moment back in 1994.

So, there's an infamous scene in Quentin Tarantino's Pulp Fiction (which you can watch here, but it's definitely NSFW) wherein Samuel L. Jackson (who played Jules Winnfield) and John Travolta (Vincent Vega) pay a visit to some guys who lifted a suitcase belonging to their boss. It's ... violent.

Before one of the thieves meets an untimely end, Jackson asks him if he reads the Bible. When the thief says, "yes," Jackson tells him, "well, there's this passage I've got memorized." That passage is Ezekiel 25:17 — AKA the same passage Madonna recites in Grande's "God Is A Woman" video — and after Jackson gives his impromptu sermon, well ... let's just say it would end up being the last thing the thief ever heard.

Jackson takes a little bit of poetic license with his recitation, but the passage reads,

"And I will strike down upon thee with great vengeance and furious anger those who attempt to poison and destroy my brothers. And you will know my name is the Lord when I lay my vengeance upon you."

Madonna's version of the speech subs out "brothers" for "sisters," and is followed by a moment in which Grande hurls her giant mallet up in the air, and it —  literally and figuratively — breaks through the glass ceiling. They did not come to play.

Grande dropped a hint about Madonna's involvement on her new album in a then-mysterious tweet on July 11. The 25-year-old pop star shared a picture of her basically gasping in Madonna's presence with the caption, "thank you @madonna ... u know why."

At the time, Grande's tweet sent fans into a frenzy. "[Plot] twist, Madonna helped you write god is a woman !," one fan speculated. "[Maybe] Madonna helped w the vocals [on "God Is A Woman"] or idk omg maybe she sampled a Madonna song?" another fan ventured a guess. "Legends supporting legends omg," a third fan, clearly shook, commented.

In retrospect, however, one fan (@dangerousblazed) got pretty close to hitting the nail squarely on the head. "IS SHE IN THE GIAW MUSIC VIDEO," he asked. "PLS SPILL THE TEA," and "A LEGENDARY DUO OF POWERFUL FEMALES WBK," he commented in two more tweets. Alas, Grande did not, in fact, spill the tea that day, but now we know that the tea was hot — scalding, even — and it was definitely worth the wait.

Bringing Madonna into the mix for "God Is A Woman" was a huge move, and definitely qualifies as the female equivalent of BDE. The song is sexy, empowering, and should also probably be a little more than terrifying for anyone who finds themselves on the receiving end of Madonna's wrathful speech. God is a woman, and she's got an ax (er, mallet) to grind. Bow down.

More like this
Everything You Need To Know About ‘Black Panther: Wakanda Forever’
By Bustle Editors
Christian Bale Sang With Taylor Swift & His Daughter Can't Believe It
By Radhika Menon
Everything To Know About Taylor Swift’s 10th Studio Album, 'Midnights'
By Grace Wehniainen and Jake Viswanath
Did 'Grey’s Anatomy' Just Drop A Major Taylor Swift Easter Egg?
By Grace Wehniainen
Get Even More From Bustle — Sign Up For The Newsletter