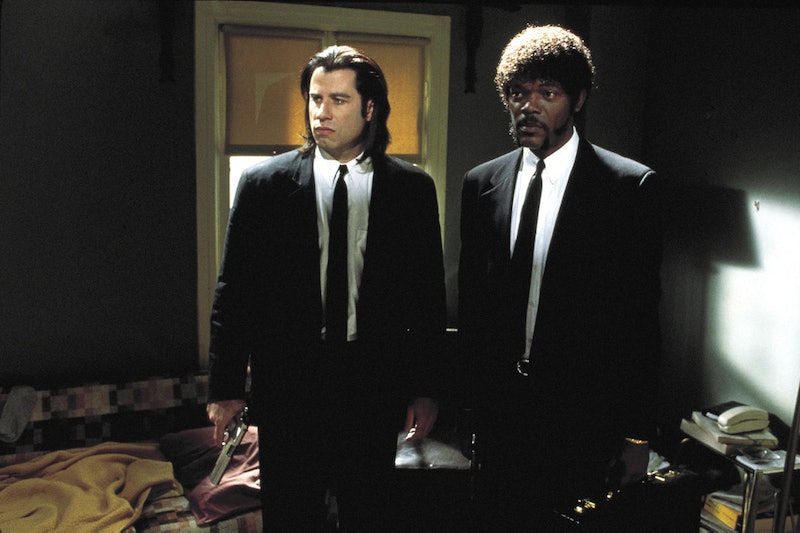 Here we are again — another anniversary that will make you feel old as time itself. One of Quentin Tarantino's best and most ubiquitous films, Pulp Fiction, hit theaters 20 years ago this week, and set the stage for him to become of the pulpiest directors of his generation. The story of many intertwined sordid lives splashed against gritty Los Angeles is my favorite Tarantino film, not only for its campy violence, but its impeccable casting. I'm not alone in thinking that Jules and Vega cruising along to a hit job and chatting about Royales with Cheese is the best scene in the film, though Mia and Vince doin’ the twist is a close contender for that honor.

Tarantino was only 29 when Pulp Fiction premiered in October of 1994, but did he look like a bitch? Not even one bit. Pulp Fiction is laden with just as much profanity, winks and nods and glorious dialogue as his later films — honestly, more so. All that and more afforded it the honor of being included on several best movie lists, including Empire's 2008 roundup which was culled from viewers’ ratings and landed Pulp Fiction at #9. So on its 20th birthday, here are some fun facts you may or may not know (or may have forgotten) about the postmodern masterpiece that is Pulp Fiction.

A Bit of Light Reading

The Family Media Guide would NOT approve Pulp Fiction for audiences of all ages, because (among so many other profane reasons!) the F-word is used a whopping 265 times, or an average of 1.72 times per minutes. That's a whole effing lot.

Whatever happened to Jules, you ask? At the end of Pulp, Samuel L. Jackson's character muses that he wants to be a drifter, and, as Status Mag notes, he shows up as a drifter playing the piano in Kill Bill: Volume 2.

You can see a young, young Kathy Griffin in a split-second scene when Marcellus Wallace will be damned.

It's the One that Says Bad Motherf*cker On It

Nowaways, you can get a Pulp Fiction homage wallet anywhere just like the one that Jules carries, but as IMDB tells us, the wallet actually belonged to Tarantino himself.

Back to Life, Back to Reality

Gizmodo gives up cool details about the overdose scene where Vince brings Mia Wallace back to life: the scene was actually filmed backwards for a more realistic (and gnarly) depiction of an adrenaline injection.

Samuel L. Jackson, like the utter boss that he is, ad-libbed the famous Ezekiel 25:17 speech according to Uproxx.

The movie could have looked A LOT different. According to a 1994 Vanity Fair interview with Quentin Tarantino, Michael Madsen was his original choice for the role of Vince Vega, and Meg Ryan, of all people, was considered for Mia Wallace. Thank b'jesus it went to the inimitable Uma.

The Deadliest Woman in the World with a Knife

The great thing (well one of them) about Tarantino's films is that they all loosely exist in the same universe. One of the best connections is Mia Wallace describing the failed television pilot she starred in called Fox Force Five, a squad of female assassins, the descriptions of which, as this Reddit user notices, ALL correlate directly to the Deadly Viper Assassination Squad in Kill Bill. I said goddamn!

Mandatory picks out the cheekiest injoke of the film. Robert Ruth, who plays the coffee shop owner that's being held up by Tim Roth, answers: "I'm not a man, I'm just a coffee shop—" when Roth asks him if he's gonna be a hero. His sentence gets cut off, so he's just listed in the credits as "Coffee Shop."

Marcellus and Mia, the Wallaces, never once speak in the film, though they are after all husband and wife, according to Shortlist. Maybe that's what Mia was looking for.

The biggest mystery of Pulp Fiction is, of course, the contents of the briefcase. A Snopes user claims that a friend of a friend had a chat with Tarantino himself about what's in the briefcase, and here's the theory—that it's Marcellus' soul:

Remember the first time you were introduced to Marsellus Wallace. The first shot of him was of the back of his head, complete with band-aid. Then, remember the combination of the lock on the briefcase was 666. Then, remember that whenever anyone opened the briefcase, it glowed, and they were in amazement at how beautiful it was; they were speechless. Now, bring in some Bible knowledge, and remember that when the devil takes your soul, he takes it from the back of your head. Yep, you guessed it. What is the most beautiful thing about a person: his soul. Marsellus Wallace had sold his soul to the devil, and was trying to buy it back. The three kids in the beginning of the movie were the devil's helpers. And remember that when the kid at the end came out of the bathroom with a "hand cannon," Jules and Vincent were not harmed by the bullets. "God came down and stopped the bullets" because they were saving a soul. It was divine intervention.

Buuuut, as City of Films points out, the bandaid was incidental; Ving Rhames had a scar on the back of his neck and was wearing the bandaid at the time of filming the scene...

The website Cracked seems pretty certain that the contents of the briefcase were diamonds, just like the diamonds in Tarantino's earlier Reservoir Dogs.

Or Nothing At All...

And as the Straight Dope reminds us, Samuel L. Jackson said in an April 1995 interview with Playboy that when Travolta asked Tarantino what was in the case, the director simply said, "Whatever you want it to be." Which is super frustrating. But I guess that's the power of Tarantino, baby.