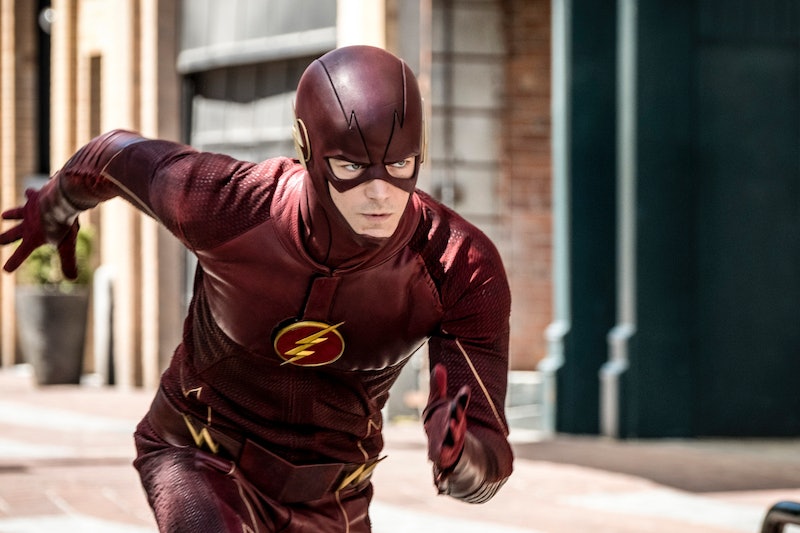 Barry Allen has faced some pretty formidable foes throughout his time as the world's fastest man alive. And while he's always managed to defeat them in the end, it appears that some of those Big Bads will be making a comeback for a significant milestone this season. Evidently, the speedster villains will return to The Flash for the show's special 100th episode — and it probably won't bode well for Barry and co.

Reports of their appearance first began circulating when DC World tweeted in late October that Tony Todd, who voiced Zoom back in Season 2, had confirmed at MCM Comic Con that he recorded new dialogue for the episode. He also revealed that Zoom wouldn't be the only evil speedster popping back up, saying they’re all “wanting a piece of Barry.” That definitely makes it sound like Central City is in for some trouble, which could result in some pretty significant consequences.

Apart from Zoom, other speedsters that have appeared on The Flash throughout the years include Savitar and the Reverse Flash. Separately, they proved to be extremely challenging for Barry to defeat, so just imagine what he'll be up against if they all join forces in the name of vengeance. If anyone can handle unexpected visitors trying to take them out, it's Team Flash, but since this episode will also serve as the show's midseason finale, it's possible things will end on a cliffhanger that leaves Barry and crew in danger.

This is, after all, a series that's known for dropping epic cliffhangers, so the aftermath of this episode could potentially be pretty devastating. Team Flash is usually able to overcome any obstacles that get thrown their way, but that doesn't mean that will always be the case. No show is immune to major deaths, and Flash 100 could be when a member of the team ends up making the ultimate sacrifice.

Of course, that's just one (very morbid) way this storyline could unfold. But given that Chris Klein, who plays The Flash's current nemesis, Cicada, recently told TVLine during an interview that his character will also have a big stake in the episode, it's safe to say that whatever happens, it will be quite explosive. “It’s a really exciting one, a really fun, fun episode,” Klein explained. “They definitely built in some bells and whistles for it!”

And showrunner Todd Helbing reiterated the sentiment during San Diego Comic Con. "All I can you tell is… it’s a little bit different,” he said, also per TVLine. "For fans, it’s special in the sense that it kind of really revisits what makes our show special. There’s a lot of good stuff.”

Will this involve Barry traveling back to the past or into the future, where he'll encounter these foes once more? Viewers will just have to wait and see, but let's hope that Klein is true to his word and that the episode will leave us with a smile on our face rather than curled up in a ball sobbing over the loss of a character we love.

More like this
How A Location Blunder Changed The Outcome Of 'The Capture' S2.
By Darshita Goyal
Hulu’s Mike Tyson Series Is Unlikely To Return For Season 2
By Brad Witter
Kathy Hilton May Not Return To 'RHOBH' — At Least Not Full Time
By Jake Viswanath
This House of the Dragon Character Will Create Another Scandal For Rhaenyra
By Kadin Burnett
Get Even More From Bustle — Sign Up For The Newsletter