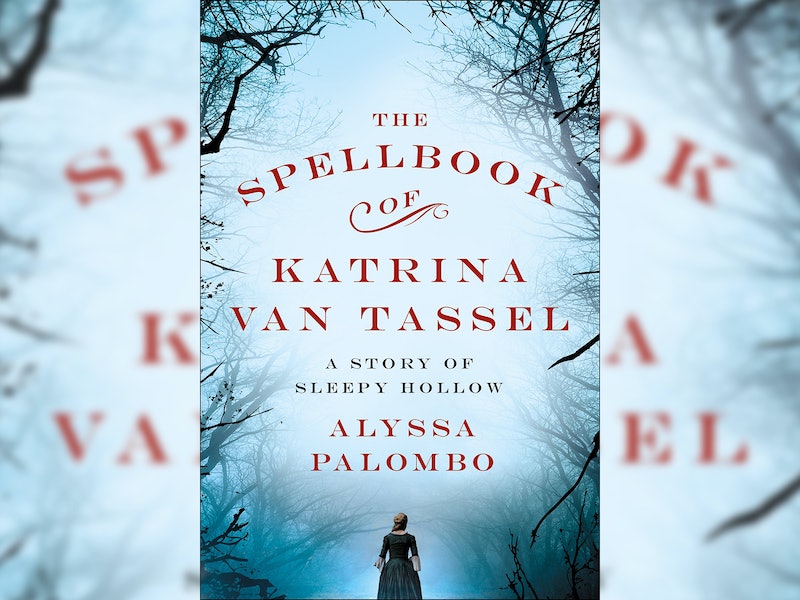 If you're a real Halloween creep like me, you probably spend the entire month of October watching horror movies, reading spooky stories, and telling your friends about all your most terrifying ghost sightings (regardless of whether or not they want to hear them).

Perhaps my favorite Halloween activity is reading classic horror stories that I'm not super familiar with. One such tale is The Legend of Sleepy Hollow by Washington Irving. If you're unfamiliar, here's the plot: Ichabod Crane, a superstitious schoolteacher, lives in the creepy town of Sleepy Hollow and competes with Brom Van Brunt for the hand of Katrina Van Tassel, the daughter of a wealthy farmer. Spoiler: Not only does Ichabod not secure Katrina's hand, but he also manages to become the victim of the Headless Horseman. He disappears from town forever, and Katrina marries Brom. It's all such bad luck!

In The Spellbook of Katrina Van Tassel, out now, author Alyssa Palombo reimagines the tale of Sleep Hollow through the eyes of Katrina, a young girl desperately in love with Ichabod and heartbroken over his mysterious disappearance. Along with the help of a rumored witch, Katrina investigates the forest around Sleepy Hollow in search of Ichabod — and, in the process, discovers that the Headless Horseman might be more than a legend.

In an excerpt from the book below, Katrina tells Ichabod (before he disappears, of course) one of the spookier tales of Sleepy Hollow: the story of the Woman in White of Raven Rock. Read it below, and order The Spellbook of Katrina Van Tassel now.

The Spellbook of Katrina Van Tassel: A Story of Sleepy Hollow by Alyssa Palombo, $17.99, Amazon

“Tell me a tale,” Ichabod murmured in my ear, his fingers toying with my hair. “You tell the most marvelous tales, my love. Surely there are more spooky tales of ghosts and goblins that you have not yet told me.”

I smiled uneasily. “Surely we’ve had enough darkness and terror of late.” I suppressed a shiver, thinking not only of the duel and its aftermath but my fearful dreams and visions. I had no wish to inspire more of them.

“But these are just stories, yes? Legends and nothing more. We need not be afraid.”

I realized that I no longer believed that, if I ever had. For all my skepticism, I knew that stories always held some truth, else why did we tell them? “So you say now,” I said, “until you must ride home after dark one evening and recall all the tales of the supernatural you have ever heard.”

“But no one is riding anywhere after dark tonight,” he said, drawing me closer. “We shall be safe and snug in here together.”

For all my skepticism, I knew that stories always held some truth, else why did we tell them?

I sighed, unable to deny him, not when we were naked in bed together. “Very well. But only one tale.” I sifted through all the legends in my mind, searching for just the right one. “This is the legend of the Woman in White of Raven Rock.”

“Is not a woman in white a mournful, weeping sort of spirit?” Ichabod asked.

“Yes, and you shall see why in this tale.” I cleared my throat and began.

“During the revolution, there was a famous battle at White Plains, as you no doubt know, and afterward British soldiers sought billet with the local folk. Two officers claimed a cottage where a young woman lived alone—her brothers were off fighting with Washington—and demanded she shelter and feed them. She obliged, having no true choice in the matter, and during the course of their stay, she fell in love with the younger of the two officers, a lieutenant.

He returned her love, and the two planned to run away together once his service was ended, someplace where armies and loyalty could not trouble them. He promised to return for her in two months’ time, when they would be married and go away. During that time, he was obliged to continue in his service under General Howe in the British army, and while she waited, she sewed her wedding dress.”

Despite my initial reluctance to tell a story, I loved having Ichabod’s undivided attention, and found I was quite enjoying myself. I had always loved these stories throughout my life, and they defined this place where I lived. It was a novel experience to tell these local stories to someone who had never heard them before; in a way, I was experiencing them anew myself.

“Once two months had passed, she climbed up to Raven Rock, a tall point deep within the forest. From there she could spy the waters of the Hudson, and waited for sight of her love’s ship.

“All night she waited, sometimes crying out, ‘My love! Have you come for me?’ She would not be moved from her vigil, not even when an icy wind whipped up and brought a blizzard with it. Still she remained, waiting for her beloved.

It was a novel experience to tell these local stories to someone who had never heard them before; in a way, I was experiencing them anew myself.

In the morning, two huntsmen came upon her there at Raven Rock, frozen to death in her white wedding dress. To this day, those who venture there— especially at night, and especially during a winter storm — claim they can hear her crying, ‘My love! Have you come for me?’” I shivered again, at the eeriness of the tale, and in sadness for the poor woman who had died rather than give up on her love. Suddenly I understood her in a way I hadn’t before. “She still keeps her vigil there, and most say she will until her beloved returns.”

Ichabod’s arms tightened around me silently. “And what became of her lieutenant?” he asked at last.

“No one knows. His name has been lost, so it is impossible to find out. He may have been killed in battle, or taken prisoner, or perhaps he deserted her and ran off with another woman. We shall never know.”

After a moment had passed, I spoke again. “Although if that was not eerie enough for you,” I added, trying for a lighter tone, “I should mention that Raven Rock is not far from the infamous clearing where the Headless Horseman is said to have met his end.”

Now it was Ichabod’s turn to shiver. “A truly haunted place, then.”

“All of Sleepy Hollow, it seems to me, is a truly haunted place.”

I had never thought of it in such a way before. “Perhaps,” I conceded.

“And you have added to its magic,” he said, “by weaving spells around me with your tales.”

I smiled at him. “Surely I do not tell these tales half so well as all the old Dutch farmwives.”

“I have had occasion to know many of them do spin a good yarn,” he acknowledged, “but you have a true gift for storytelling, Katrina. You should write these tales down.”

I laughed. “For whom? And what purpose? Everyone around here already knows them.”

“And you have added to its magic,” he said, “by weaving spells around me with your tales.”

“For newcomers like me, then. Or perhaps they could even be published, to show the world what history and imagination the Dutch have in their river valley. Surely I could not be the only one to find such tales so fascinating.”

I laughed again. “And I should write them and expect to be published? A woman author? Away with you,” I said, shoving his shoulder playfully.

His face remained seriously. “Why not? This is a new country we are living in, Katrina. We, its people, can make it anything we wish it to be. What do you wish our nation to be?”

I had no answer. I lay awake for a long time after he fell asleep, pondering his words.