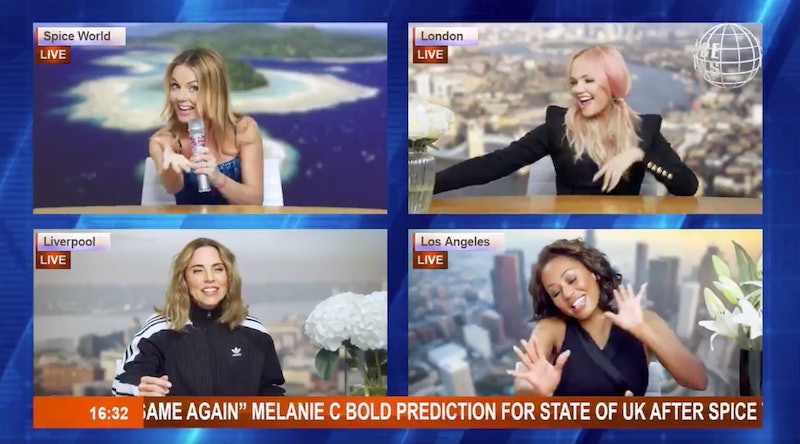 Today has been a massive day in Spice world. Whilst the girls haven’t appeared together since they performed at the Closing Ceremony of the London Olympic games in 2012, rumours have flown around social media throughout 2018 that there may be a Spice Girls reunion on the cards. Emma Bunton AKA Baby Spice announced on her Heart Breakfast show on Nov. 5 that fans should keep their eyes peeled on the bands new social media pages around 3 p.m. for full details. And you better believe that’s where I have been all day because the Spice Girls reunion tour video announcement has finally been made and I don’t know if I want to laugh or cry with joy.

In true breaking news style, and really giving the announcement the real emphasis it deserves, the video dropped on the Spice Girls twitter feed promptly at 3 p.m. just as Baby Spice herself promised. Whilst Victoria Beckham won’t be joining the girls on tour because of work commitments, she said in a statement: "Being in the Spice Girls was a hugely important part of my life and I wish my girls so much love and fun as they go back on tour, I know they will put on an amazing show and the fantastic fans past and present are going to have a wonderful time!"

So back to the video. The clip opened with the four girls sat in a news studio, dressed smartly in black, looking all grown up. That is until Ginger (Geri Horner) enters in a sparkly blue number, ever the fashion icon. Whilst getting shouted at for not following the new grown up aesthetic Baby (Bunton) enquires as to whether she can still get away with bunches and Sporty (Mel C) slips into a sports jacket. This is a cheeky nod to their 2007 reunion, when Geri turned up to the press announcement wearing a very different, er, look, to everyone else. They then broke into the "la la la" of "Spice Up Your Life," and I was done. The announcement had me giggling away and if hearing the girls sing together again doesn't give you shivers I don't know what will.

Speaking about the announcement in a press release, Emma Bunton said, "it’s time to spice things up all over again! I can’t wait to perform to our forever supporting fans and a whole new spice generation! Love you all.” Equally excited Mel B said, "I’ve said it so many times I’m beside myself it’s actually happening yipppeeee. I’m now properly screaming it from every rooftop — me and my girls will see you all on stage!” Scary spice, you certainly will.

Now for details. The video announced that the grand Spice Girls reunion tour will begin in June 2019 in Manchester. There are six dates across the UK ending in London on June 15. If you thought Glastonbury tickets were hard to come by, I have a feeling this is going to be a whole different ball game. The tweet announced that tickets will go on sale on Nov. 10 at 10:30 a.m. via Ticketmaster so I am praying to the girl power gods that you are by a computer and ready to type your card digits in.

Whilst this has obviously sent fans into overdrive it also means a lot to the girls. Mel C said, "reminiscing with the girls about how much fun we had, made me feel like it was the right time to do it all over again!" And what exactly does this mean for girl power? Geri Horner made it pretty clear, "I am so excited, together we celebrate girl power with our fans and the next generation and everyone is welcome! Hold tight it's gonna be fun."

In another very exciting tweet Jess Glynne revealed that she would be joining the girls as a very special guest. She said “ARE YOU MAD! I’m joining @spicegirls ON TOUR! Y’all best come through cause this stadium tour is gonna kick OFF!” The sheer feeling of girl power in the stadium is going to be palpable and I am so ready for it.

This was always going to be amazing news but it is so clear from the announcement that the girls have still got it. Whilst time may have passed they're still massive personalities with the ability to make you giggle and drag you to the dance floor. It would appear that if there was any animosity before, it has been banished and they are so ready to serve us some real girl power vibes. And like the true Spice Girl and girl power ambassador she is, Victoria Beckham speaking in support of it was a lovely flourish. Hold tight people, summer 2019 can't come soon enough.

More like this
Victoria Beckham Brought Posh Spice Back In A Very Rare Performance
By El Hunt
60 Empowering 'Renaissance' Lyrics That Make Perfect Instagram Captions
By Catharina Cheung
The Controversy Around Beyoncé's “ENERGY”, Explained
By Frances Stewart
Everything To Know About Beyoncé's New Album
By El Hunt and Radhika Menon
Get The Very Best Of Bustle/UK