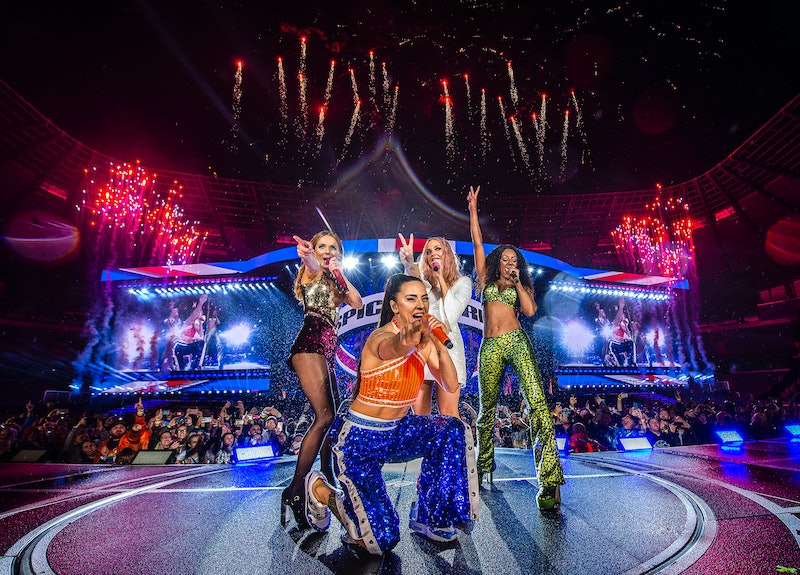 All around the country, those who spent their formative years dancing to the Spice Girls have been getting their life now that the Spice Girls have finally come back to town. No doubt a huge staple of British culture, you can't help but feel just a teeny bit patriotic when you sing along to their songs, but what about their international fans? Surely they exist, but are they getting any love? Well, as their UK tour's come to a close, the ladies aren't done yet, and now the Spice Girls are considering a world tour, so your mates in the States can get their fill of spice too.

Mel C's super up for it, at least. As she told Billboard in a recent interview: "We don't want it to end." Before their final show of the tour at Wembley Stadium on June 15, she told the magazine: "We have had the most incredible time,” adding: "We were so excited about the show, but we never, never could have prepared ourselves for how incredible it's been.”

Singing in venues even larger than the ones they tended to perform in during their '90s heyday, Sporty Spice also said how performing their songs, "reignited the pride that we feel about what we created." So, now they're considering bringing that energy and pride beyond the country they were born in.

"I think for us right now, the big thing is we don't want it to end. We've had an incredible run here in the U.K. We'd really like to get further afield," Mel C said. While they have fans all over the world, the international Spice Girls fans have had to make the pilgrimage over to the UK in order to see their favourite girl group. Mel C appreciates the dedication, but now she wants her and her girls to repay the favour.

"I think we'd really like to take it out to the fans that haven't been able to travel but have supported us all these years. So that would be the immediate thing," she confirmed. But Mel C's not the first one to put the idea of a world tour out there. Simon Fuller, the group's manager told the Official Charts on June 3, that the chances of a world tour were stacked at around 50:50.

But ultimately, as Fuller recognises, the decision "is really down to the girls." But if a world tour does go ahead, those living afar might not have to wait too long for it. "We can kick into gear at 24 hours notice," Fuller assured the site. As things stand, it seems like Australia might be the ladies' first pit stop, as Mel B addressed their sold out crowd at Wembley Stadium, and told them: "We'll see you in February in Australia," as CNN Entertainment reported on June 16.

I'm hoping that an announcement will come soon, and when it does, I reckon you should look up those flights, so you can follow these ladies Down Under, and beyond.