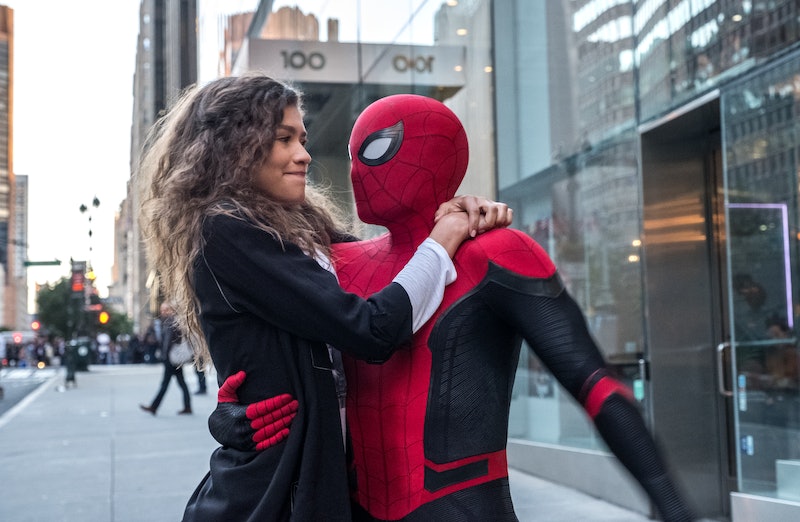 Avengers: Endgame doesn't include the post-credits scenes MCU fans are used to, but don't assume you can leave the new Spider-Man movie, out July 2, just as quickly. The Spider-Man: Far From Home post-credits scenes aren't just about jokes and Easter eggs, though that's a part of it. The Spider-Man sequel has a extra scene mid-credits and one way at the end, and neither is a little fun, throwaway clip. Both scenes offer new information relevant to Far From Home and, probably, to the next Marvel Cinematic Universe movie.

Major spoilers ahead! The first scene, which comes a few minutes into the credits, is a continuation of the conclusion of the movie. The film ends with Peter Parker (Tom Holland) and MJ (Zendaya) going on a date in which she experiences her first time swinging from building to building around Manhattan. (She hates it!) The mid-credits scene comes in just as they're going to part ways. A news alert starts playing on the side of a building in which we find out that, before he died, Mysterio (Jake Gyllenhaal) recorded a video message revealing Spider-Man's identity and paired it with doctored clip from their last confrontation that makes it look like Spider-Man murdered him for no reason and tried to kill a bunch of civilians in London. Everyone is shocked, including MJ, who now has to figure out how much she trusts Peter, and including the audience, because this flipped that happy ending we thought we had upside down.

On top of that, the scene also includes another news clip, but this one is from someone very familiar to anyone who saw the Tobey Maguire series of Spider-Man movies. J. Jonah Jameson (J.K. Simmons), the publisher of The Daily Bugle in those films, is now hosting a controversial-looking web series, also called The Daily Bugle, in which he yells at his audience about the whole Spider-Man situation.

The next scene comes after the rest of the credits and involves Maria Hill (Cobie Smulders) and Nick Fury (Samuel L. Jackson). They'd both been featured throughout the movie; first, working with Mysterio, and then, helping Spider-Man fight him. But, in this scene, we find out that throughout the film Hill and Fury were not actually the S.H.I.E.L.D. agents at all, but shape-shifting Skrull aliens (like, from Captain Marvel) disguised as them. Don't worry, though, this was done with Fury's knowledge. While he's working in some sort of Skrull headquarters (and relaxing on a fake beach inside of it), Talos (Ben Mendelsohn) and his wife Soren (Sharon Blynn) take his and Hill's place in dealing with Mysterio and Spider-Man. While this reveal doesn't necessarily change anything in the Far From Home plot — aside from maybe explaining why Fury and Hill fell for Mysterio's act in the first place — it seems like it could be setting up some plot for Phase 4.

Spider-Man: Far From Home marks the end of Phase 3 of the MCU, and other than some release dates — as in, just the dates, not the titles that accompany them — the next film in the series is still a mystery. Since the Skrulls (and the Kree, who are also mentioned offhand in Far From Home) are a major part of Captain Marvel, the final Far From Home scene could end up relating to a Captain Marvel sequel. Marvel fans will just have to wait until the next movie — whatever it is — comes out in May 2020 to find out how these scenes alter the MCU.