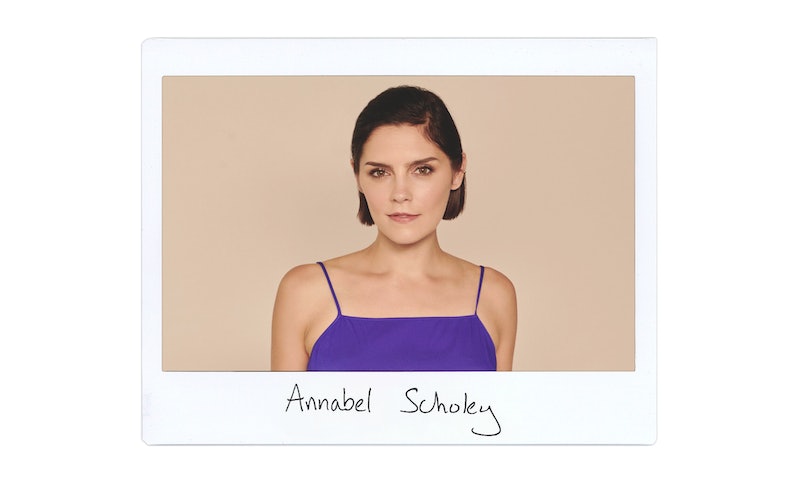 When celebrities hang out with Bustle writers, we want to give them the chance to leave their mark. Literally. So we hand them a pen, a piece of paper, a few questions, and ask them to get creative. This time, The Split and The Salisbury Poisonings star Annabel Scholey is leaving her mark in the Bustle Booth.

Annabel Scholey has a knack for playing powerful and complex women. "But I really enjoy playing flawed characters,” she adds, laughing, in her native Yorkshire lilt. “They're just a bit more interesting to play," she muses over the phone as we catch up about her career and upcoming role in BBC One's The Salisbury Poisonings.

From period dramas (Jane Eyre, Poirot, and Medici) to costume epics (Britannia); long-running shows (Eastenders, Holby City), to musicals (Walking On Sunshine) and even Shakespeare (she was Queen Anne to Kevin Spacey's Richard III), there's little the Oxford School Of Drama graduate hasn't done. She's even played a vampire in Being Human. But her most recognisable role of late has been as that of Nina Defoe, the reckless middle sister in BBC's legal drama The Split. "It really felt amazing to be able to read on the page all the different layers of the woman that you're playing," she says, singing the praises of writer Abi Morgan.

On June 14, Scholey returns to the screen in the BBC’s dramatisation of The Salisbury Poisonings, based on the real-life Novichok poisonings of Russian double-agent Segei Skripal and his daughter Yulia in 2018. She takes on the role of Sarah Bailey, the wife of Detective Sergeant Nick Bailey who is exposed to the deadly poison while working the case. Scholey, who followed the news story at the time recalls, "You heard from the government, and then the accusations against Russia; you heard about the Russian spies, but you didn't hear about the ordinary people. That's what this drama is about."

There was a duty of care, she explains, when approaching a story based on real events. "There was no chance that you could just get on with it like a normal job," she say. "But I always like to do things I haven't done before, and with Salisbury it was a very different role for me. There was no make up; we didn't use any lights; and [it's filmed in a] very docu-drama style. You can't hide behind any tricks, you have to just be very truthful."

On that note, she points out, she isn't entirely thrilled with her stamp on the Bustle Booth. "I'm sorry about my drawing,” she says through muffled laughs. "I really can't draw!"

Get to know more of what makes Scholey tick in her questionnaire below.

More like this
This First Look At 'The Gold' Shows Jack Lowden In A Whole New Light
By El Hunt and Sam Ramsden
A New Netflix Doc Will Explore The Unsolved Murder Of Jill Dando
By Sam Ramsden
Helena Bonham Carter Doesn't Think 'The Crown' “Should Carry On"
By Sam Ramsden
'Abbott Elementary' Fans Probably Missed This 'Parent Trap' Easter Egg
By Sam Ramsden
Get The Very Best Of Bustle/UK
Sign up for Bustle UK's twice-weekly newsletter, featuring the latest must-watch TV, moving personal stories, and expert advice on the hottest viral buys.