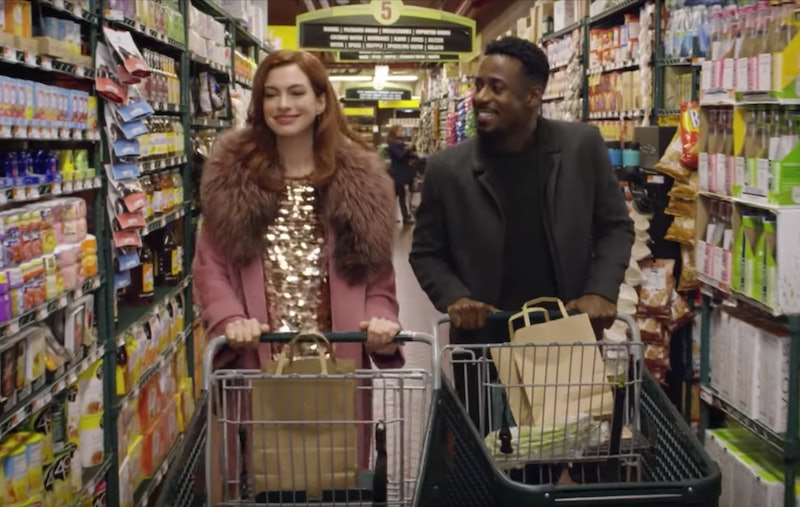 The half-hour series will consist of eight standalone episodes that will explore various forms of love, such as “sexual, romantic, familial, platonic, and self-love,” according to The Hollywood Reporter’s initial report about the rom-com series. The anthology will be written, directed, and produced by John Carney, who is best known for his movies Begin Again and Once. Episode descriptions haven't been released just yet, but per Entertainment Weekly, Hathaway will star as a woman based on author Terri Cheney, who suffers from bipolar disorder. Her story will be titled “Take Me As I Am,” a reference to Cheney’s “Take Me As I Am, Whoever I Am” column.

"My story is called 'Take Me As I Am.' I am playing a woman who is learning how to find love while also [beginning to process having] bipolar disorder," Hathaway told EW of her character. "I was really humbled by this experience. It wrecked me for a month afterwards… [but being able to walk away from it] expanded my compassion so much for people who have no choice in this matter."

The Ocean’s 8 actor also revealed that she worked with the author to ensure that she depicted someone with bipolar disorder as accurately as possible. "I think if we're honest with ourselves, we all have to learn that we are worth loving," she told EW. "[Cheney] talks about that, she talks about needing just one person, one person to love all of her… that one person giving her the space, being compassionate, gives her hope and gives her a future."

Elsewhere in Modern Love’s star-studded teaser trailer, Patel, Fey, Milioti, Garcia, and more traverse the idyllic backdrop of New York City. As each respective character contends with the many woes that come with love and romance, Captain & Tennille's classic "Love Will Keep Us Together" plays in the background of the trailer.

Modern Love comes on the heels of the Amazon studio's desire for more female-driven content. Jennifer Salke, head of Amazon Studios, told THR of the series back in June 2018, "We're looking for our next big show that women also can't stop talking about."

Sam Dolnick, assistant managing editor at The Times, added of the upcoming anthology series, "Since its launch 14 years ago, Modern Love has struck a chord with readers that has only deepened with time. It remains one of our most popular columns both online and in print; it has become a successful weekly podcast; and the first Modern Love events last year were hits with live audiences. And now we are thrilled that Modern Love will become a TV show on Amazon."

Get ready to fall in love with Modern Love when it premieres on Prime Video this fall.

More like this
Everything To Know About The 'Daisy Jones & The Six' TV Series
By Maxine Harrison and Brad Witter
The Song At The End Of 'The Last Of Us' Ep 1 Has A Deeper Meaning
By Sophie McEvoy
'Mayfair Witches' Already Changed 2 Major Characters From The Books
By Grace Wehniainen
At 28, Rosie Perez Risked Her Career To Stop Playing Stereotypes
By Gabrielle Bondi
Get Even More From Bustle — Sign Up For The Newsletter
From hair trends to relationship advice, our daily newsletter has everything you need to sound like a person who’s on TikTok, even if you aren’t.