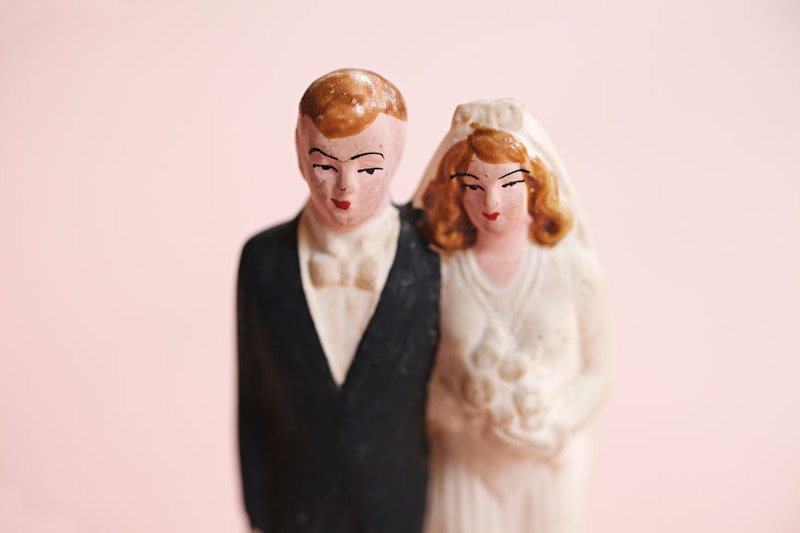 “Are you two going to get married?” I have been asked this question, in one form or another — “Do you want to get married?” “When are you getting married?” “Why aren’t you married?” — more times than I can count. It is to be expected, I suppose, when you’ve been with the same person for eight years, especially when you love that person and live with that person and have pets with that person. By now, I am so used to the question that I can anticipate exactly when it’s coming in a conversation, like some kind of wildly useless sixth sense. I knew that this summer, while living in Madrid without my significant other, I would be asked this question by just about everyone I met. I knew what I would say when it inevitably came up: “I don’t know, maybe, but I don't think so.” So then why, every time someone asked, “Are you two getting married?” did I find myself struggling to speak the truth? Why did I suddenly, and desperately, find myself wanting to say "yes"? That was a question I didn’t have an answer to, and worse, a problem I didn’t have a solution for, until I read Gabrielle Zevin’s New York Times’ Modern Love essay, “The Secret to Marriage Is Never Getting Married.”

So then why, every time someone asked, “Are you two getting married?” did I find myself struggling to speak the truth?

As a young woman — really, as an unmarried woman of any age — there is so much pressure to couple up, to pair off, to commit, and while I’ve been able to stave it off for most of my twenties, I finally felt its squeeze these last few months. I know my partner and I aren’t getting married. I know neither of us particularly want to get married. And yet I have recently found myself questioning what I was so sure I knew: That I was okay loving and living and being together, no rings required.

There are a lot of reasons we haven’t gotten married — reasons I have talked to my partner about at length, reasons we’ve both agreed make a lot of sense. We are both in a lot of post-collegiate debt. We don’t own a home of our own yet. I’m a writer and he recently started his own business, two career choices that are not very lucrative, at least, not immediately. Neither of us are religious or even very spiritual. I wouldn’t say we’re unromantic, but we are private people, especially when it comes to our relationship, so neither of us are particularly keen on pouring our hearts out in front of a room of our friends and family. We don’t plan on having children.

And yet I have recently found myself questioning what I was so sure I knew: That I was okay loving and living and being together, no rings required.

I know the reasons by heart. And yet, after years of being pummeled with questions about why we aren’t getting married, I have started to question that decision despite knowing it is absolutely the right one for us.

That is why I found so much comfort in writer Gabrille Zevin’s essay about her long-term relationship and her decision to stay happily unmarried to the man she loves. Like me, Zevin has been with her partner, Hans, since college. The couple has been together for over 20 years (over a decade longer than my partner and I), have shared multiple addresses, have had multiple dogs together. And, like me, they have been asked countless times if they are married, or why aren’t they married, or when they planned on getting married. After years of practice, she came up with what she thought to be a perfect answer: That she simply doesn’t believe in marriage.

“When I say I don’t believe in marriage, what I mean to say is: I understand the financial and legal benefits, but I don’t believe the government or a church or a department store registry can change the way I already feel and behave.

Or maybe it would. Because when the law doesn’t bind you as a couple, you have to choose each other every day. And maybe the act of choosing changes a relationship for the better. But successfully married people must know this already.”

Of course, Zevin admits, delivering this answer isn't always easy, especially when the rest of the world isn't keen on accepting it. But, as she explains, marriage shouldn't be about the rest of the world. It should be about you and the person you love. "I believe you to be a constant in my life, and I, a constant in yours," Zevin writes about Hans. "Loving you is the closest thing I have to faith."

In a way, "The Secret to Marriage is Never Getting Married" was the validation I had been craving, the reassurance I felt I needed from the outside world that my relationship, despite it's non-legally binding nature, was true and real and just as important as those of married couples. The truth is, I don’t know if my partner and I will get married. If I am being honest, I don’t really care if we do. Like Zevin said about the man she loves, I know the one I adore is a constant in my life, and I know that I, too, am a constant in his. That’s not something that’s going to change, whether we get married or not, so bring on the questions. I’m confident, knowing my answer is still, “I don’t know, maybe.”