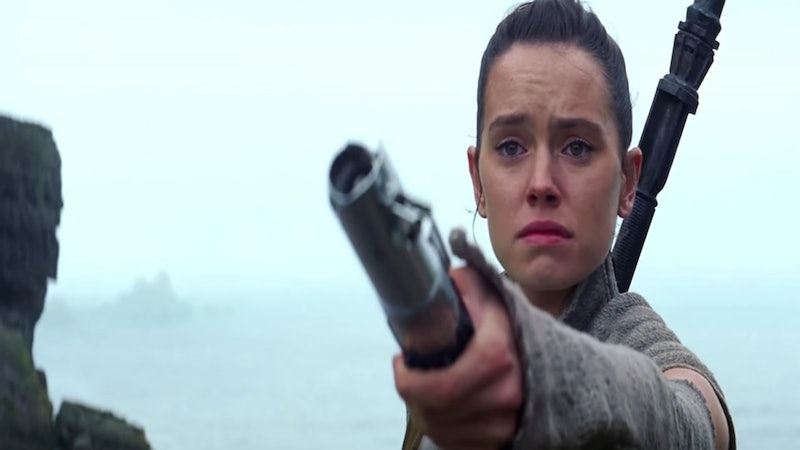 "I only know one truth, it's time for the Jedi to end." And Luke Skywalker speaks, everyone. The Star Wars: The Last Jedi trailer has arrived, and I think everyone is ready to figure this whole time travel thing out, so they can watch the movie immediately. Between Luke finally getting to say lines and Rey continuing to kick all the butt (and training to be a Jed!?!), the next installment of the Star Wars franchise looks jaw-droppingly awesome.

The Last Jedi trailer premiered at the Star Wars Celebration in Orlando to a crowd of screaming fans. With Luke finally back with a vengeance, you can feel the weight of the franchise's history throughout the trailer. The resolution of Rey's solo journey to find Luke looks just as empowering and epic as you dreamed it would be.

While the main focus is on Rey, she's not the only character who gets some serious hero moments in the trailer. Luke is front and center, but there are also glances of the late Carrie Fisher as General Leia Organa in a scene, and some explosive scenes featuring everyone's favorite bromance, Finn and Poe. They may not be hanging with Luke just yet, but it's clear the guys are keeping the resistance going while Rey's off training to be Jedi. No, seriously though, how cool are those training scenes?

Rey is the clear star here, and watching her go through training sessions is goosebump-inducing in a major way.