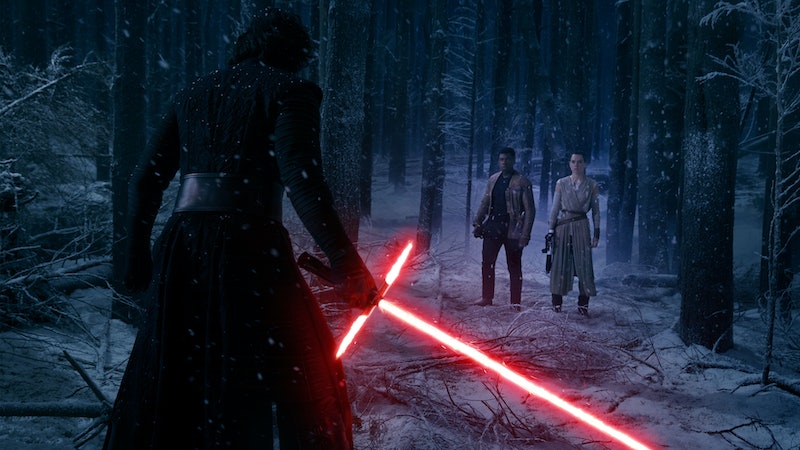 This Monday, Disney got the week off to a good start when the announced the official title for Star Wars: Episode VIII. From here on out, the forthcoming second installment of the new trilogy will be known as Star Wars: The Last Jedi. But what exactly does that mean? That's the question that's been on every fan's mind since the news broke; and while most theories center around either Luke Skywalker or Rey, there's an alternative theory that focuses on a huge secret that the ominous title could be hiding in plain sight. Is "The Last Jedi" actually multiple people?

The aforementioned theories about Luke and Rey do make some sense. After all, Luke is the only remaining Jedi from the original trilogy, with the deaths of Obi-Wan, Yoda, and Anakin. And if, god forbid, Luke dies in Episode VIII, that would make Rey the last remaining master of the Force. But do we really expect things to be that straightforward?

While The Last Jedi seems to be pointing towards one individual character who will carry great significance in the film, there is a surprising amount of ambiguity in the title… and it's all in that final, fictional word. You see, while "Jedi" can be a singular word — as in the sentence, "Luke is a Jedi" — it can also be a plural word — as in, "Qui-Gon Jinn and Obi-Wan Kenobi were both Jedi" or, "The Jedi are intergalactic peacekeepers."

In that context, it's possible that Episode VIII's title isn't referring to just one particular character, but rather to a small group of them. If this turns out to be the case, then which characters might make up the faction known as "the last Jedi"? Obviously, Luke and Rey are still frontrunners for the title — but it's possible that they spend a portion of Episode VIII recruiting more Force-sensitive warriors to their cause.

In The Force Awakens, Finn showed surprising aptitude with a lightsaber, effectively holding off Kylo Ren in single combat for a surprisingly long time, given his total lack of training and the fact that he was facing off against a master; perhaps he has the potential to be a Jedi warrior. Other possibilities include franchise newcomers like the mysterious characters played by Laura Dern and Benicio del Toro — or other major new players we don't even know about yet.

Of course, even before Rey, Luke wasn't necessarily the last Jedi. It's very possible that one of the characters the title is referring to is none other than his sister, Leia, who has already proved herself to have some of the same control over the Force as her brother. That theory would jive with reports that Carrie Fisher has an even larger role in Episode VIII than she did in The Force Awakens.

There could be another clue contained in the title, as well, beyond the word "Jedi." The most striking thing about the announcement — other than the newly-unveiled subtitle itself — is the red font used in lieu of the trademark bright yellow most fans associate with Star Wars. Could that disorienting color change be a reference to Kylo Ren, whose flickering red lightsaber was one of the most iconic images of The Force Awakens? Since most of us are assuming the character's redemption will be one of the major arcs of the entire trilogy, it would certain defy expectations to have Kylo turned back to the Light side of the Force in Episode VIII instead of Episode IX.

The final clue that the title might contain is a reference to a series of 10 novels published from 2005 through 2008, known as The Last Of The Jedi. Taking place between Episode III and Episode IV, this series centered around a character named Ferus Olin, a contemporary of Anakin Skywalker, who was a Padawan at the same time Anakin was training under Obi-Wan. After the events of Revenge Of The Sith, Ferus went into hiding and founded a safe house for other fugitive Jedi — which morphed into the beginnings of what eventually became the Rebel Alliance.

Of course, as any die hard Star Wars fan knows, the Expanded Universe is longer considered canon since Disney bought out Lucasfilm and kickstarted the franchise with The Force Awakens. So while Ferus Olin specifically is not likely to turn up in The Last Jedi, it's still possible that Episode VIII could borrow some ideas from that series of novels, and that a previously unknown renegade Jedi could be one of the eponymous warriors in question.

We'll find out the identity of the last Jedi when Star Wars: Episode VIII blasts into theaters on Dec. 15, 2017.