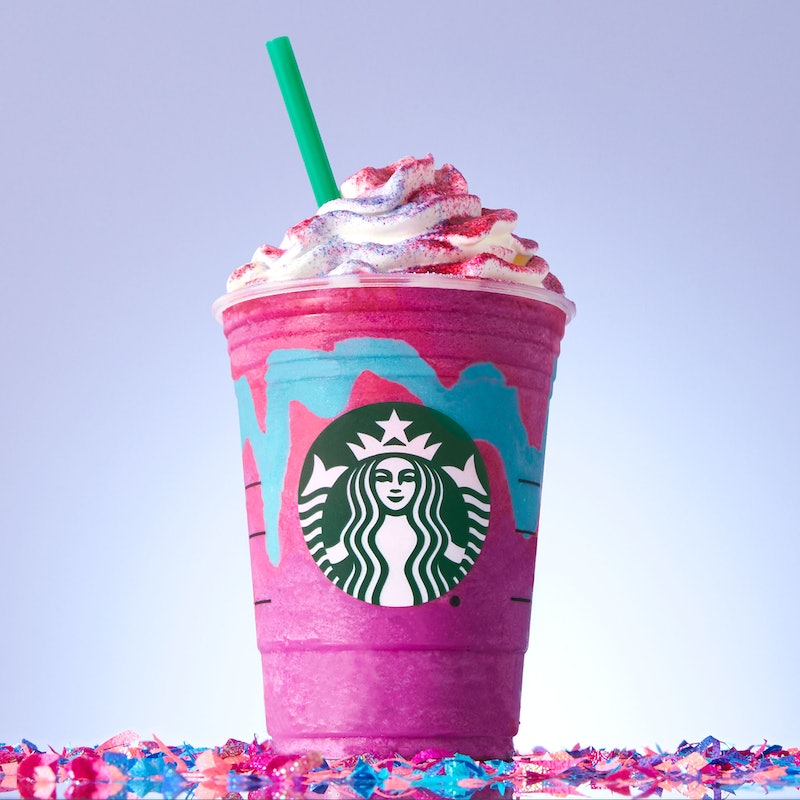 Right at the end of last week, rumors started swirling that something spectacular might — might — be on the way: A brightly-colored Frappuccino filled with something called "Pink Powder" and topped with literal "Unicorn Dust." The rumblings of this mystical drink came courtesy of a number of baristas posting on Reddit and Instagram, and naturally, once the word got out, the internet had a field day with it all. Admittedly, I was a skeptic; Bustle reached out to Starbucks, who had nothing to share at the time, and knowing how easy it is to fake a rainbow-colored Starbucks drink (hi there, April Fool's Day), I took the stance of, "I'll believe it when I see it."

Now, though? Consider me a believer: Starting on April 19, the Unicorn Frappuccino will be available at participating Starbucks stores in the United States, Canada, and Mexico for a limited time. I do mean limited, by the way; it's only going to be around through Sunday, April 23 or while supplies last. Magic, after all, is fleeting.

According to a press release, the Unicorn Frappuccino is a "blended crème" drink — which means it's not a coffee-based Frapp — made with "a sweet dusting of pink powder"; mango syrup is blended up with the drink before being "layered with a pleasantly sour blue drizzle." It's topped with vanilla whipped cream and "a sprinkle of sweet pink and sour blue powder topping" — so basically, it sounds like a Sweet Tart in a cup.

Perhaps even more intriguing, though, is this: The Frappuccino... changes as you drink it it. The press release notes that at first, it looks purple shot through with "swirls of blue"; when it's in this form, it tastes "sweet and fruity." If you stir it, though, its color and flavor both change, becoming pink in appearance and "tangy and tart" in taste. Apparently the more you swirl, the bigger the transformation. And, I mean, who doesn't like playing with their food? (No one, is the answer. Anyone who tells you otherwise is lying.)

The Unicorn Frappuccino will be available at participating Starbucks locations throughout the United States, as well as in Canada and Mexico, from April 19 through April 23. A Tall, 12-ounce Frapp will set you back about $4.25 to $4.95, depending on the market. Grab yours. Experience the magic.

And Unicorn Frapp? I never should have doubted your existence. Please accept my sincerest of apologies. I believe in you, Unicorn Frapp!

More like this
On TikTok, Tinned Fish Date Night Is The Latest Viral Food Obsession
By Emma Carey
TikTok's Butter Board Might Be The New Cheese Plate
By Emma Carey
Deliveroo Is Selling Lotus Biscoff Cinnabons Now
By Darshita Goyal
10 Pumpkin Recipes That Are Way More Creative Than Pie & Lattes
By Rebecca Deczynski and Alexis Morillo
Get Even More From Bustle — Sign Up For The Newsletter