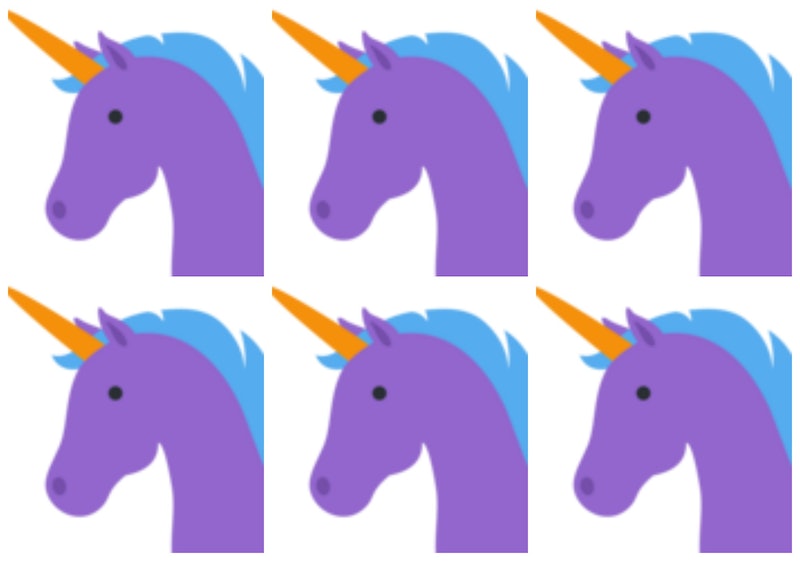 UPDATE: On April 18, it was announced that the Starbucks Unicorn Frappuccino is indeed real; it will be available at participating Starbucks locations in the United States, Canada, and Mexico from April 19 through April 23 or while supplies last.

EARLIER: With the sudden influx of all things unicorn we’ve seen recently, it is perhaps unsurprising that rumors of a “Unicorn Frappuccino” in the works at Starbucks have gotten the internet all in a tizzy. But is the Starbucks Unicorn Frappuccino real? Bustle reached out to Starbucks, who had no details to share; it appears that at this particular moment, the rumors are just that: Rumors, which are very, very much unconfirmed. That isn’t stopping everyone from freaking out about it, though, because, well… of course it’s not. Unicorns tend to have that effect on people.

Here's the deal: Earlier this week, a number of photographs allegedly taken and posted by baristas began appearing on the r/Starbucks subreddit purporting to show a behind-the-scenes look at upcoming alleged drink. Redditor outside_the_madness revealed an image of a bag of “Pink Powder” on Wednesday, titling the post, “Does anyone know what this is for?”; Redditor hellabummed followed it up with a photo titled “Unicorn Frapp topping” depicting shaker of mysterious blue powder labeled “Unicorn Dust”; and a second photo from hellabummed showed what appeared to be a purple, Frappuccino-like drink, with the post simply titled, “Unicorn Frappuccino 2017.”

Additionally, a now-deleted Instagram post dated April 11 from a user named @layamariesuvada (who may have now deleted their entire account, as well — when I attempted to view it at about 3:30 p.m. ET on Friday afternoon, I got a “Sorry, this page isn’t available” message) appeared to show a sign advertising the Unicorn Frappuccino. And what’s more, a still-up Instagram post from a different user, super_hiro_pope, claims to show the sparkly pink, purple, and blue tops of a trio of finished Unicorn Frapps.

The images, of course, are all over Twitter now, although a few additions seem to have been added to the bunch: Two photos that allegedly depict full-sized Unicorn Frappuccinos. The drinks in these images are a pinkish purple and shot through with blue, topped with whipped cream and some colorful accents. Here, take a look:

Redditor hellabummed claims that the rumored drink “tastes just like those tropical Skittles”; meanwhile, according to Redditor StormTheParade, the recipe cards will allegedly be delivered to Starbucks locations on April 14.

But I don’t know, you guys. I’m… skeptical, especially since nothing has been confirmed. For what it’s worth, it wouldn’t be difficult to fake images like the ones that are currently making the rounds on social media; after all, a notable April Fool’s joke this year purported to show a rainbow-colored Starbucks drink showed us all how it’s done. The so-called “Rainbow Drink” wasn’t dissimilar to the pink, purple, blue, green, and orange “secret menu” drinks that made the rounds last summer — except that somehow, this one seemed to show one drink with all the colors layered on top of one another in a single, gorgeous, ROYGBIV-hued beverage.

It was, of course, a prank (and one which Starbucks itself apparently wasn’t in on); the creators later revealed that it was nothing more than milk and food coloring. The silly ingredient names should have tipped us all off, too.

And honestly, that’s kind of how I feel about this whole Unicorn Frappuccino thing: Personally, I think there’s a good chance it’s as mythical as an actual unicorn. (Although for what it's worth, Pink Drink is now an official Starbucks menu item.)

Maybe that’s just me, though. If I end up having to eat my words sometime during the middle of next week, I will do so — and probably gladly, because even though I am skeptical, I also really, really want to know what a Unicorn Frappuccino would taste like. In the meantime, at least we know for sure that Unicorn Milkshakes exist elsewhere, right?

More like this
I Tried The $20 TikTok Viral Oishii Strawberries — Here's What I Thought
By Sophie Hanson
On TikTok, #SeñoraEra Shows Latinx Users Becoming Their Mothers
By Natalia Perez-Gonzalez
How To Schedule An Instagram Post
By Emma Carey
How To Turn WhatsApp Read Receipts Off
By Emma Carey
Get Even More From Bustle — Sign Up For The Newsletter