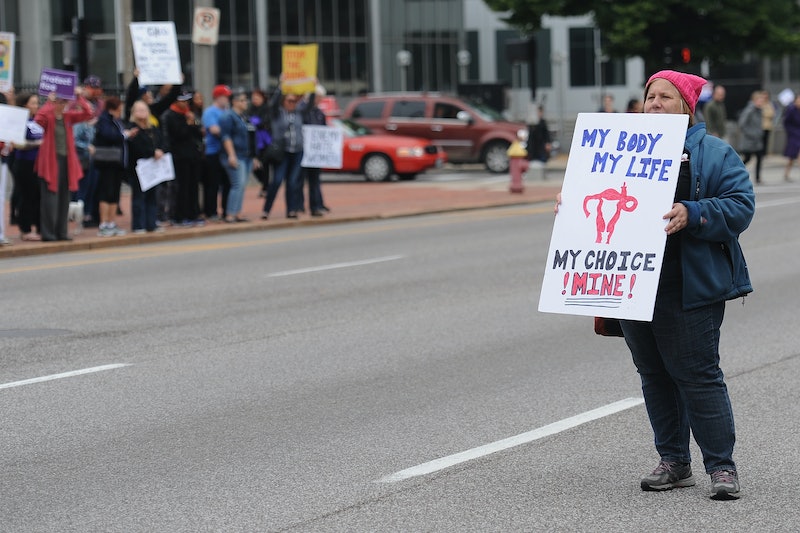 Recent developments on abortion legislation in Missouri have been under scrutiny in recent months. The state of abortion access in Missouri right now has left many people concerned, and rightfully so. For now, individuals who want to access abortion services in the state can still do so, but they may not be able to for much longer.

On May 24, Missouri's Republican governor Mike Parson signed into law a ban on abortions after eight weeks of pregnancy, with no exceptions for rape or incest, the New York Times reported. The paper emphasized that many women do not even realize they are pregnant at eight weeks gestation. As CBS explained, Missouri's abortion law would penalize doctors who perform the procedure outside of the eight-week window with up to 15 years in prison, if the law goes into effect as planned on Aug. 28.

However, as CBS noted, the ban is expected to face a court challenge, which would delay its implementation. Furthermore, the American Civil Liberties Union (ALCU) of Missouri filed notice on May 28 that it's gathering signatures to seek to place the law on the 2020 ballot, meaning that voters would decide whether or not it goes into effect, the Kansas City Star reported. The outlet added that the ACLU has until Aug. 28 to gather over 100,000 signatures to ensure that the measure is included on the ballot.

While Missouri's new law already means that abortion access stands to be severely curtailed in the state, there's an even more pressing issue that could soon end abortion access there altogether. Right now, Missouri only has one abortion clinic, which is run by Planned Parenthood. The Missouri Department of Health and Senior Services has refused to renew this clinic's license, with Planned Parenthood noting via the AP that state officials said the refusal is related to an investigation into "potential deficient practices" at the clinic by physicians "involved in patient care."

Colleen McNicholas, an OB-GYN at the clinic, said to BuzzFeed News that she believes the state is trying to intimidate clinic employees with this investigation in order to stop them from providing abortion services.

If its license isn't renewed, the sole abortion provider in Missouri could be closed down by the end of the week, making it the only state in the country without an abortion clinic, KHSB reported. The outlet added that on May 28, Planned Parenthood announced that it's suing the state for failing to renew its license. The state of Missouri hasn't commented publicly on the organization's lawsuit.

Even if Planned Parenthood wins its lawsuit and the clinic is allowed to operate as usual, there are still many other hurdles for a person to access abortion in the state. As the Guttmacher Institute noted on its website, a Missouri "woman [seeking an abortion] must receive state-directed counseling that includes information designed to discourage her from having an abortion, and then wait 72 hours before the procedure is provided."

Moreover, according to Guttmacher, private insurance policies in the state only cover abortions if a woman's life is at risk, unless that woman purchased an optional rider for her health insurance policy. Missouri health plans under the Affordable Care Act, as well as those for state employees, also only cover abortions when a woman's life is in danger, Guttmacher noted.

While those who need abortion services in Missouri can still obtain them, this may not be the case in the coming weeks. Abortion access in Missouri is rapidly diminishing — and advocates are working hard to fight this decline.