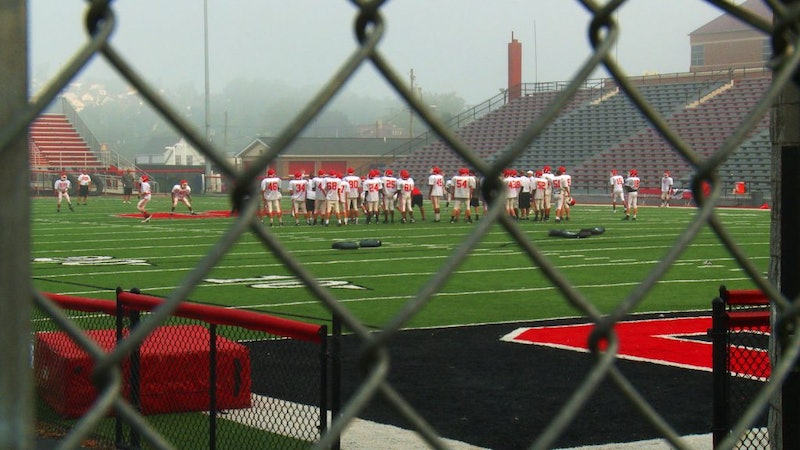 In fall of 2012, the small town of Steubenville, Ohio was thrust into the national spotlight. A rape case and its aftermath tore the town apart, as a battle between parents, school officials, a crime blogger, football culture, and the hacker group Anonymous unfolded for the world to see. As painful as it was for so many, ThinkProgress argues that the events that rocked Steubenville helped "spark a broader national conversation about sexual assault" and how early rape culture takes hold. Years later, Nancy Schwartzman has chronicled the crime, its affect on the town, and the aftermath in the documentary Roll Red Roll, in select theaters now. Speaking over the phone to Bustle ahead of release, the filmmaker says that she made Roll Red Roll for men.

"I didn't make this film for women," Schwartzman says. "We live this; we know this. I made this film so that men and boys watch this and see themselves and see this behavior and say, 'Oh my god, I do not want to be that guy. That is not who I am. I am now starting to recognize that kind of predatory behavior in various friends, and I want to do something about it.'"

As NBC News reports, two boys were accused of raping a 16-year-old girl in 2012. The assault was documented on social media, The New York Times reports, through photos, videos, and posts by alleged witnesses. Trent Mays and Ma'lik Richmond, both football players, were eventually put on trial as juveniles in early 2013 and found guilty. Mays, in addition to rape, was also convicted of "distributing a nude image of a minor," per the Times. Four adults, including a school superintendent, a principal, and two coaches, were charged by a grand jury with obstruction, NBC reports, for allegedly being aware of the crime and not reporting it, with varying agreements reached.

But what brought attention from all over the world to this case was not just the act itself. The shockingly crude behavior and victim blaming by other students and parents alike that Schwartzman speaks of is well-documented in the Roll Red Roll. One Instagram post by another student showed the young woman, seemingly unresponsive, being carried by her ankles and wrists. Many comments and Twitter posts mocked her. Some adults in the town questioned whether the young woman had any responsibility in preventing what happened to her.

"Initially when I was digging around in the case, there was just so much social media that was still public; you could just read pages of how so many kids were joking about [the rape] and what they were saying," Schwartzman says.

Social media posts, YouTube videos, and Instagram photos shared by the convicted young men and their friends were used by prosecutors to recreate the events of the night of the assault, and eventually were used as evidence in court.

But the rise of social media itself, Schwartzman says, isn't to blame. It's only a new method to spread the messaging of toxic masculinity and male-dominated environments, which can lead to assault and rape.

Crime blogger Alexandra Goddard, who is featured prominently in the doc, was the first to gather screenshots of these posts and publish them on her crime blog Prinniefied.com "The lack of empathy was so chilling," Schwartzman says of the victim-blaming jokes, photos and videos that were shared among high schoolers. "It was important to show [in the documentary], because people [in the town] were denying how bad it was."

In December of 2012, the hacker group Anonymous leaked a video of teenage boys, allegedly friends of the boys later convicted, mocking the young woman on the very night of her assault. ("She is so raped right now," is one of the audible comments.)

"The leaked video is not explicit, it's kids making horrible jokes, but because it wasn't explicit it was able to be shared, and then it hits you, 'Oh my god, this is what rape culture is. That laughter," says Schwartzman.

Rape culture and preventing gender violence is a key focus of Schwartzman's work. She created the app Circle of 6, which alerts a set of six people to your whereabouts should you need help or find yourself in trouble. Roll Red Roll takes her advocacy further. Schwartzman, who has made two previous short films — one about consent and one about teenagers and technology — knew at once when she started digging into the Steubenville case that there was just too much to cover for a short film. She opted instead to use the case to tackle her first feature documentary, but with a different purpose in mind than some of the other crime-based docs that she had previously seen.

"I had wanted to explore this issue but really looking through the lens of perpetrators, bystanders and witnesses," she says. "I wanted to know what would make a 'regular' 16-year-old do this. What is the language they're using? How can we crack the environment to see what it looks like? So often stories of sexual violence are all victim-centered, and there's this unnecessary burden and scrutiny put on the survivor. That, to me, in terms of social change, is a waste of time and energy. It unfairly burdens the victim. So we're not looking in the right place. We need to look at who's [participating in sexual assault and victim-blaming], where they're doing it, how they're doing it."

Schwartzman first visited Steubenville exactly one year after the assault, and though she says she was met with some reluctance from its citizens, it was clear that the entire town was still reeling. "I thought, let me just go into town, see what I see, see what it feels like, see who I meet and who will talk to me," she says. "And even in my first [trip], the entire town was talking about the assault. And it was obvious that this incident had really impacted an entire community."

Several Steubenville citizens do speak on camera for the documentary about how the rape case impacted their town, and how they're recovering from the onslaught of media attention. At one point, after admitting that the perpetrators were in the wrong, one interviewed teen says, "When you put yourself in that situation, you have to take responsibility for your actions," speaking about the assault survivor. While Schwartzman hopes that this movie will show men how harmful rape culture is, attitudes cultivated by that culture are still pervasive even among young women.

"It's so insidious they way we're all deep in it, we're all living in rape culture," Schwartzman says of that particular interview. "I wanted to have some element of this movie create a shock. I thought that was important to include because there are young women that are part of the problem too, it's not just men and women and this gender binary. We're all part of this."

In each of the post-screening Q&As she's put together for the film, Schwartzman has made sure there are male experts on the panel. She and her production team are partnering with several groups where men are taking the baton and teaching other young men about the construct of masculinity, consent, and other topics from a male-to-male perspective. "Because a lot of this stuff is constructed and inherited," she says. "Preventing sexual violence is men's work as well."

More like this
Claire Foy & Rooney Mara Revisit A Devastating Tale In 'Women Talking'
By Bustle UK
The 'Love, Lizzo' Harry Styles Scene Is Just 1 Moment That Made Fans Feel Seen
By Brad Witter
You’ll Be Able To Stream Bullet Train Before The Holidays
By Arya Roshanian and Radhika Menon
How To Stream 'She Said' In The UK
By Maxine Harrison
Get Even More From Bustle — Sign Up For The Newsletter