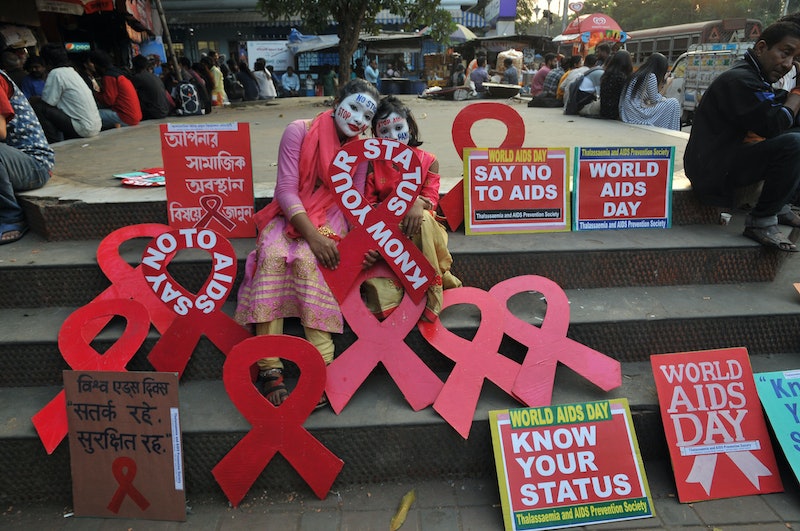 Dec. 1 marks World AIDS Day, a global event that aims to raise awareness around the illness and to commemorate those who have lost their lives to it. On another note, it calls to light an unacceptable reality: many people still don't understand the basic facts around HIV and AIDS. In fact, one such activist believes that stigma against AIDS is an "epidemic" in itself — and fighting misinformation is the key to solving it.

Per the Centers for Disease Control and Prevention, HIV is an acronym for Human Immunodeficiency Virus, which attacks the body's immune system, specifically a certain type of cells called T cells. Once you contract HIV, you have it for life. AIDS, the acronym for Acquired Immunodeficiency Syndrome, is the "last stage of an HIV infection," per the CDC. However, with the right medication, people can now live with HIV indefinitely without progressing to AIDS. What's more, it's nowhere near as easy to contract as many people seem to think.

"28% of millennials believe they can contract HIV through [skin to skin] contact like hugging," Toraje Heyward tells Bustle, citing a study conducted by the pharmaceutical company Merck and Prevention Access, a health equity initiative that fights stigma against HIV and AIDS. Heyward, who lives with HIV, is a council member for ECHO, a "first-of-its kind council of youth activists living with HIV who are actively organizing online and in their communities." ECHO is run through the organization Advocates for Youth, a nonprofit dedicated to sexual health education, the prevention of HIV and other sexually transmitted diseases, and more.

To be clear, it is impossible to contract HIV through skin-to-skin contact. As the CDC notes, the only way to receive or transmit HIV to another person is through the passage of specific bodily fluids: blood, semen, pre-seminal fluid, rectal fluids, vaginal fluids, and breast milk, for example.

But this lack of knowledge around how HIV can and cannot be transmitted only scratches the surface. In the 2019 study Heyward referenced, there's another startling number: 23% of millennials said that they were "not at all informed or only somewhat informed about HIV." Though approximately 1.1 million people in the United States are living with HIV in 2019, according to the U.S. Department of Health & Human Services, about 15% aren't aware they have the virus.

Heyward believes these misunderstandings about HIV and AIDS are, in and of themselves, an epidemic. He says, “In my mind, I’m like: I know the science discredits [the misinformation about AIDS and HIV]…however, the stigma kind of outweighs the science." For this reason, he maintains that educating people and raising awareness around HIV and AIDS is essential to battling these deeply rooted stigmas.

The activist also points out that many people view AIDS as something totally distinct from all other health issues, which further contributes to hysteria and the spreading of false information. "It's a health status," he says. "That’s what HIV is. It's a health status, no different from being a diabetic, or having cancer, or any other health condition."

One of the key components of HIV and AIDS education is keeping up to date with the latest news in research breakthroughs and funding. In January 2019, a group of scientists from Temple University and the University of Nebraska Medical Center successfully eliminated HIV from the DNA of infected mice for the first time in history. The breakthrough, revealed in a study published in the journal Nature, proved that "permanent viral elimination is possible," giving scientists hope for the future eradication of HIV and AIDS in humans, too.

The good news is that funding for AIDS research, education, and prevention is increasing. The budget for U.S. Federal Funding for HIV and AIDS in 2019 was $34.8 billion, with the majority of that funding ($21.5 billion) going toward domestic care and treatment. Still, the funding allotment for domestic research represented a mere 7% of that funding, and the smallest allotment went toward the Minority HIV/AIDS Initiative (MAI), which addresses the "disproportionate impact of HIV/AIDS on racial and ethnic minorities in the U.S.," per the Kaiser Family Foundation. The Trump administration has also established a domestic campaign to end the transmission of AIDS within the next decade. Trump's 2020 budget gave $290 million to the campaign, which aims to provide improved testing, prevention, and medical care.

Of course, funding is only one part of the battle. Another huge issue, as mentioned above, is that of rampant misinformation and legal discrimination against people living with HIV and AIDS. There are a number of states that have implemented HIV-specific criminal laws. Per the CDC, "several states criminalize one or more behaviors that pose a low or negligible risk for HIV transmission." All of this leads to risk of prosecution for those living with HIV and AIDS; some of the max prison sentences for the above laws can be as extreme as life in prison, the CDC notes.

Many people might not feel comfortable sharing their HIV status to partners, friends, or family, lest they face discrimination or judgment. For this reason, Heyward suggests people make an effort over the holidays to start conversations with friends or family about their status. This is especially relevant, given that the CDC recommends all adults get tested for HIV at least once in their lives, regardless of their sexual orientation or preferences. "When was the last time you were tested?" he suggests you ask, pointing out that it creates the opportunity for an honest dialogue.

If you want more information and resources about AIDS and HIV, you can keep track of ECHO's efforts to de-stigmatize and decriminalize the lived experiences of people with AIDS or HIV. You can also check out the resource library at the AIDS Education & Training Center Program. If you're interested in taking action on World AIDS Day, use this Advocates for Youth guide to urge your state legislators to update HIV policies in your state.