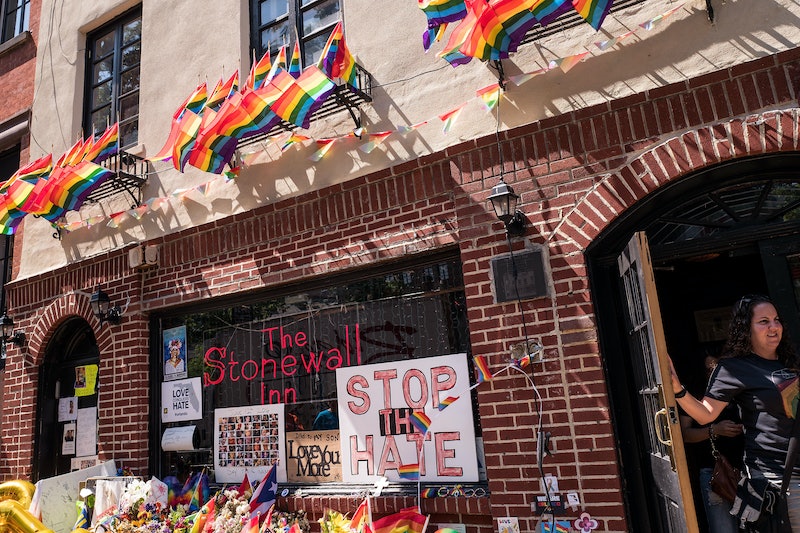 The single most important place in the United States — and arguably the world — that's connected to the LGBTQ movement was attacked over the weekend. A teenager smashed in Stonewall Inn's window with a bat, damaging its historic neon sign. A suspect was arrested, but he will not face hate crime charges because anti-gay views reportedly did not play a role in the attack.

Authorities say the 19-year-old had been kicked out by the bartender and broke the window in response at about 4:30 a.m. on Saturday. He had been hanging out at the bar with co-workers when the altercation with the bouncer broke out. The damages run in the range of $7,000, authorities said, and The New York Daily News reported he was charged with criminal mischief and reckless endangerment.

The bar was home to a police raid in June of 1969 that turned into a riot and demonstration for LGBTQ rights, the Stonewall Riots. Police regularly raided gay establishments at the time, but this time the patrons fought back. It is credited as the birthplace of the modern gay rights movement.

In 2016, President Obama recognized the significance of the bar and designated a new national monument around the site. It was the first National Park System site connected to the LGBTQ community. "They stood up and spoke out," Obama said, designating the site. "The riots became protests. The protests became a movement. The movement ultimately became an integral part of America."

The year before in 2015 it was given landmark status by New York City. "There are few locations that can be cited as the birthplace of a global movement,” Councilman Corey Johnson, a Democrat representing the area around Stonewall. “One such location is the Stonewall Inn.”

As for the broken window, the boy's mother spoke to The Daily News in his defense. She said her son, William Gomez, told her that a bodyguard was messing with one of his co-workers and "he told him to stop."

"He then thought the conversation was over but at one point he was punched in the face," the mom told the paper. "He’s a quiet boy ... He doesn’t get into trouble.” The Daily News reported that last year he was arrested for assault, in 2015 for criminal impersonation, and in 2014 for robbery.

That was not the story shared by the bartender. Salvador Bobadilla, 44, told The Daily News that he was escorting one patron out of the bar when he became hostile. "I told him 'You have to leave,'" Bobadilla told the paper Sunday. "I couldn’t hold him because he was naked and he kept slipping away." The man didn't have a short on.

Then, Bobadilla said, Gomez came over in defense of his friend and was also allegedly violent.

"Another guy came out of nowhere,” the bouncer told the paper. "Suddenly he was trying to fight me. He was choking me. I had to defend myself. You know, my job is hard enough as it is. So I took care of him."

Bobadilla insisted his background in martial arts kept him from getting hurt further. “It could have ended badly for me,” the bodyguard said. “Luckily, they’re two little punks.”

The suspect, Gomez, was released Saturday after his arraignment in Manhattan Criminal Court. He didn't comment on his way out of court.

The bar's window and sign were fixed by the time the establishment opened for business on Saturday afternoon.

The watering hole has remained open since the six days of violent clashes with law enforcement and protests that marked the Stonewall Riots in 1969. Saturday was no different.