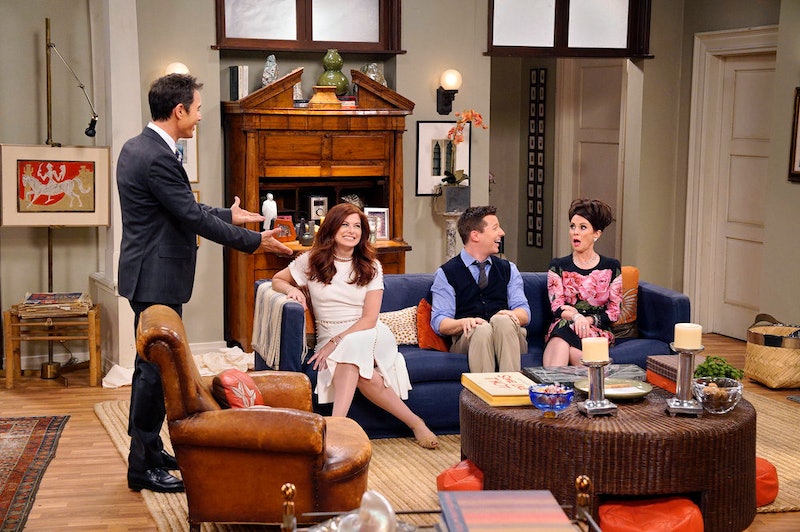 The joy of your favorite show being almost back on air is in all the interviews those behind are doing to promote the revival. So if you've been wondering how Will & Grace got its name, then the query that had you up all night has finally been answered. According executive producer David Kohan, they didn't just pick the leads' two first names randomly. There was religious significance behind it.

"It's very Jewish," Kohan said during an interview with Entertainment Weekly. "There's a theologian named Martin Buber who talked about the will to go after and the grace to receive something. It always seemed like two complementary ideas. They happened to be good names, as well."

Of course, this makes sense, since Judaism plays an important role in the series. Grace Adler is Jewish, and, while she isn't religious, as Jewish Journal puts it, she "spouts Yiddishisms, reminisces about Camp Ramah" and gets overexcited about being profiled in the Jewish magazine The Forward. Besides which, she also marries a Jewish doctor, Marvin "Leo" Markus. According to The Nation, this was massively significant, since it was "the first prime-time sitcom" ever to show a wedding between a Jewish woman and a Jewish man. And the theology that Kohan is referring to is interesting in and of itself.

According to Mental Floss, the concept comes from Buber's 1923 Jewish philosophy book I and Thou, a tome that explores the significance of a person's relationship with God but also the meaning found in human relationships in general. Myjewishlearning.com reports that Buber's philosophy divides relations into two types: "I-It relations and I-Thou relations." The same site suggests that the I-It relation is most people's default daily setting, but stresses that only by entering into an I-Thou relationship can a person enjoy a relationship with another person "with his or her entire being."

The part about will and grace comes in a part of the text where the philosopher imagines contemplating a tree — doing so visually, feeling it as movement, assigning it to a species, imagining it as a law, and dissolving it into a number. But he maintains that, throughout all of this, "the tree remains my object... But it can also happen, if will and grace are joined, that as I contemplate the tree I am drawn into a relation, and the tree ceases to be an It. The power of exclusiveness has seized me."

It's a beautiful philosophy and one that gives depth and dimension to Will and Grace's friendship and characterization. It was already obvious that they're a perfect (platonic) match. But knowing this theological idea influenced their naming process just hits home how well they complement each other.