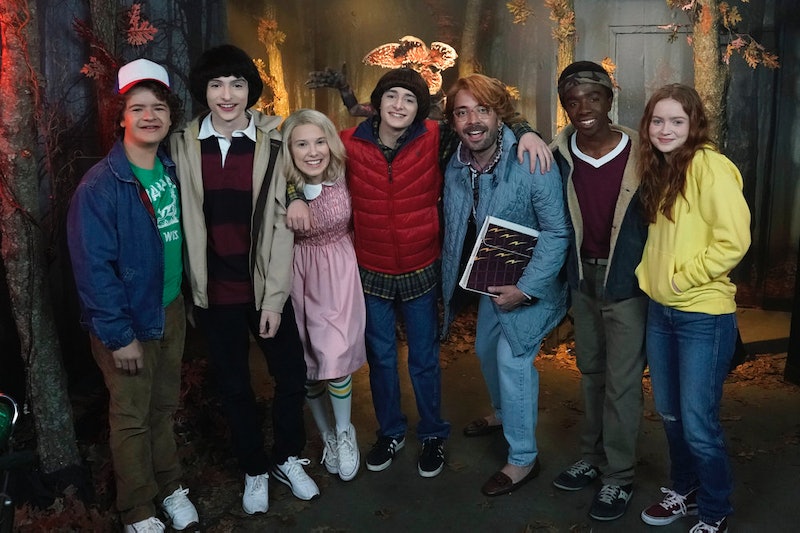 Here's a new Stranger Things moment that will make fans fall in love with the stars all over again. The Stranger Things cast scared fans at a wax museum alongside Jimmy Fallon for a Tonight Show Starring Jimmy Fallon segment titled "Madam Tussauds Stranger Things Surprise." The bit is as hilarious as it sounds and, yes, fans were beyond shocked and partially terrified to come face-to-face with Caleb McLaughlin (Lucas), Sadie Sink (Max), Noah Schnapp (Will), Millie Bobby Brown (Eleven), Finn Wolfhard (Mike), Gaten Matarazzo (Dustin), and Jimmy Fallon (dressed as Barb).

As explained by Matarazzo in the video below, fans entered what they thought was a new Stranger Things wax exhibit at Madame Tussauds Wax Museum in New York City. Obviously, there was no real exhibit, but rather the Netflix cast and Fallon waiting in costume to give fans the surprise and scare of a lifetime.

Guests were escorted inside and instructed to sit on a bench to take a photograph with the "wax figures" behind them. Fallon also made sure to stand with his back showing as to not give away the prank. Let's just say, the cast was really good at standing still and not moving. They made the perfect wax figures and proved they're in the right profession. As one person declared, "This is awesome. They look so real."

Once the guests would sit down and smile for the picture, then the cast would reveal they were actually real-life people. You can probably imagine how some of the visitors reacted. Here's one example:

After the initial shock wore off, fans were overcome with emotion and excitement to meet part of the cast from the Netflix hit and, of course, Fallon as Barb. Who can blame them? One young fan even started to cry as she hugged Brown. The fan's mom said, "She's gonna have a heart attack." Brown was so nice and consoled her while telling her not to cry.

One of the funnier interactions was between a guy and Fallon, who informed the late-night talk show host, aka Barb, while laughing, "You look so stupid." He added, "You scared the crap out of me. I'm a grown man, don't do that." Fallon couldn't help but laugh at the guy's reaction and joked, "Can we get him a change of pants?"

Fallon is known for surprising fans with celebrities via the art of photobombing. He's done it countless times before with help from Chris Evans and Chris Pratt for the 2014 Super Bowl, Dwayne "The Rock" Johnson at Universal Studios, and Cameron Diaz on Top of the Rock, among many others. The celebrities who have participated in the segment have been nothing but great sports. It's truly a fun way for people to interact with celebs.

Seeing as Stranger Things Season 3 debuts on Netflix on July 4, it was only appropriate for Fallon to come up with a fake Madame Tussauds exhibit featuring the young stars who are beyond talented. Who wishes they also could've been scared by the cast? Same.

More like this
Sadie Sink Almost Wasn’t Cast On 'Stranger Things'
By Frances Stewart
Everything To Know About Netflix’s 'Never Have I Ever' Season 4
By Jack Irvin and Gabrielle Bondi
Meet The New Team Of Residents Joining 'Grey's Anatomy' In Season 19
By Brad Witter and Sophia Moore
An Ultimate Guide To The Music Of 'Rap Sh!t'
By Brad Witter
Get Even More From Bustle — Sign Up For The Newsletter