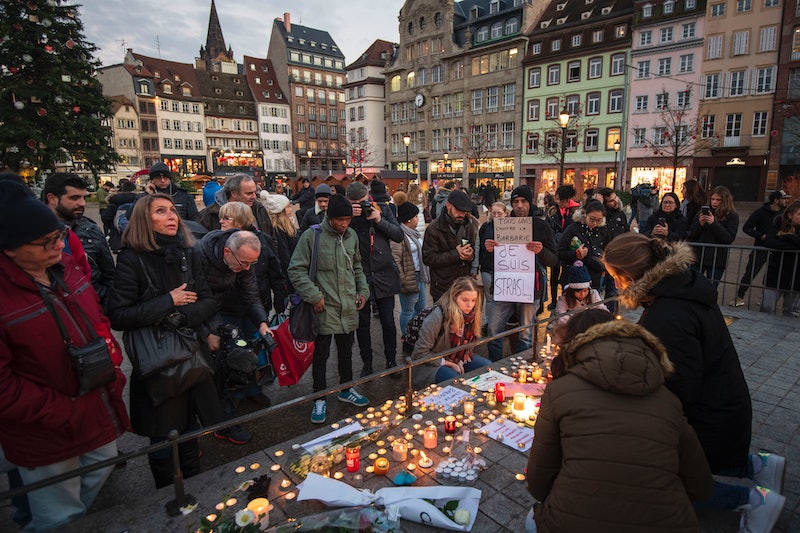 A Christmas market in Strasbourg, France suffered a mass shooting on Tuesday that left the country reeling and searching for a perpetrator on the run. It's still early, and more facts will emerge about the event in the coming days — but here's what's known so far about the Strasbourg Christmas market attack.

The gunman opened fire around 8 p.m. local time on the rue des Orfèvres, a street near the market in the center of the city, according to The Irish Times. He ran along several roads and kept firing, as well as attacking people with a knife, per the BBC. Over a dozen people were hurt over the course of about 10 minutes, The Guardian reported, including at least two with mortal injuries. After exchanging fire with police, the shooter escaped by jumping into a taxi, French terrorism prosecutor Rémy Heitz said at a Wednesday press conference, according to EuroNews.

"Solidarité de la Nation tout entière pour Strasbourg, nos victimes et leurs familles," President Emmanuel Macron tweeted on Tuesday (roughly translated: "The whole Nation is in solidarity with Strasbourg, our victims and their families."). The French government raised the country's terrorist threat level to the highest stage, according to The Independent. Here's what else is known about the attack.

The Location: A Famous Christmas Market With Thousands Of Visitors

Strasbourg's Christmas market is the oldest one in France, an Alsace tourism site says. It brings in over 2.5 million visitors a year, including thousands who were in attendance this Tuesday evening, according to The New York Times.

In 2000, Strasbourg's market was the site of an infamous would-be terrorist attack hatched by al-Qaeda. Ever since then, Christmas markets have been seen as risk zones for terrorism, according to The Telegraph. A particularly devastating recent attack occurred in Berlin in 2016 when a truck driver killed a dozen people by driving into a crowd at the city's market, per the BBC.

The Victims: At Least 2 Dead

Two people have died from the attack. One was a 45-year-old Thai tourist named Anupong Suebsamarn and the other was a French local man in his 60's whose name hasn't yet been released, per the BBC.

Thirteen others were hurt, including one who is brain dead and seven others with serious wounds, Heitz said, per the BBC. Two of the injured are employees of the radio station Europhonica, the station said in a tweet.

The Suspect: A Man With A History Of Criminal Activity

Police have identified the suspect as a 29-year-old French man who was born in Strasbourg, per the BBC. Prior to Tuesday's attack, he had been convicted of 27 crimes in three countries and served prison sentences in French and Germany. Most of his crimes were related to violence and robbery, Heitz said at the Wednesday press conference.

Neighbors of the suspect told the Associated Press that they think his jail time "destabilized" him. French intelligence agents have reportedly been monitoring him for some time. They'd actually searched his apartment earlier on Tuesday while looking into a different attack — a homicide and robbery, per the BBC.

According to The Telegraph, police suspect that another perpetrator may have somehow been involved in the shooting.

The Man Hunt: Ongoing & Could Possibly Stretch Across Borders

The suspect disappeared around Neudorf, a suburb of Strasbourg that's near the border with Germany, per reports. According to The Guardian, that's where police have been focusing their search efforts; they're also looking all around the south of the city and monitoring "key road points."

So far they haven't found the man, who is reportedly wounded — according to the BBC, police shot him in the arm before he managed to escape on Tuesday night.

Here's What's Not Known Yet

The BBC reports that the suspect's motive is currently unknown, though a terrorist investigation has been launched. It's unclear if the attack could have been prevented by increased safety measures at the event — according to The Independent, there were already high levels of security at the market (shoppers' bags were searched and unauthorized vehicles were prohibited). We also don't yet know how the incident will affect the market, though it remained closed at least for Wednesday.

Local leader Robert Hermann told The New York Times that the atmosphere in Strasbourg is grim. "The air is heavy," he said, "and people will be afraid as long as the attacker hasn't been arrested."