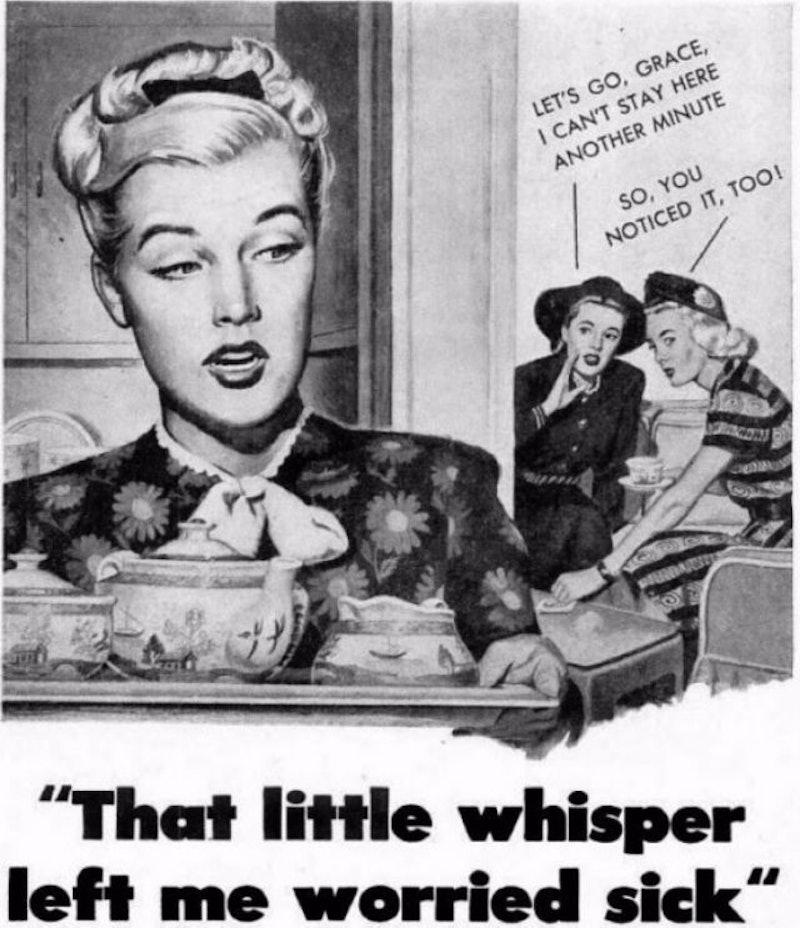 Strange as it may seem, the reason you put on deodorant every morning might be thanks to a Bible salesman and a teenage girl from Cincinnati. The history of deodorant is a sneaky one, finding its success story when it tapped into the one thing that made women open their purses faster than anything else: Insecurity.

According to Dr. Juliann Sivulka, author of Soap, Sex, and Cigarettes: A Cultural History of American Advertising, it all started with an Ohio surgeon in 1910 who found his palms too sweaty for comfort when holding a scalpel. He invented a solution that would fix the problem, but his teenage daughter saw a bigger opportunity there. Calling it Odorono (Odor? Oh, no!) she set up a team of door-to-door saleswomen, sending her battalion across neighborhoods and towns, trying to sell the product.

But sell it they did not. The issue was that they were hawking a solution that was seen as a medical necessity — pit stains were a pharmacist's concern, and not many felt like they needed the prescription. So she took it in a different direction: What if sweating was a serious embarrassment, and you had no idea? Or even worse, like lipstick on teeth, what if you had no idea because no one knew how to tell you? And so the BO empire was born.

Borrowing $150 from her grandpa, Edna Murphey rented an office in downtown Cincinnati to launch her business, only to quickly find herself moving the operation back into her parents' basement when sales revealed what women thought of the whole stink issue: There wasn't one. People just weren't fussed about BO.

Murphey needed help if she was ever going to do more with her business than break even, so according to Dr. Sivulka, she set her sights on New York. There an advertising agency called J. Walter Thompson Company paired her with James Young, a copy writer who used to be a door-to-door Bible salesmen in the south. While that might not have sounded encouraging at first, Young quickly earned his keep. He single-handedly created one of the most famous advertising lines in marketing history, turning Murphey's basement business into a multi-million dollar company.

And he did it by putting the fear of smell into women everywhere.

It wasn't until people started to move into crowded cities and take up desk jobs that BO became a thing. People just didn't think that a little bit of natural body odor was offensive until then. But once they began to work in tight quarters inside office buildings and mingle on densely packed streets, the marketing world got a new idea. What if they could use that shift from private countrysides to bustling metros to their advantage? You could practically hear the ka-ching of dollar signs.

"This change in working environment sparked a greater concern for hygienic issues such as perspiration and odor. The acceptance of wetness and odor that might have existed among people before no longer seemed acceptable in a business office," Karl Laden explained in Antiperspirants and Deodorants.

Men went behind desks and women went behind department store counters, but while tighter quarters might have inspired a closer look at people's stink, women at large still didn't believe their odor was offensive. So how was the product going to move? Simple. You hit them where it hurt most: Their love lives.

One thing to understand about Puritan women is that any mention of any body part would have had them calling for the smelling salts. To bring up the curve of a woman's armpit would have been just as shocking as talking about her lacy delicates — but instead of that being a road block to advertisers, they used it as a pressing point.

The idea was to plant a seed of paranoia: What if you smelled, but no one (thanks to the rules of propriety) could tell you? "Since societal standards dictated a proper person pretend that most bodily functions did not exist; the 'right' thing to do was to be silent on these matters in polite company," Dr. Sivulka explained in her article.

Using that, the first Odorono ad was positioned as being a favor to women, especially to those trying to pin down the affections of their paramours. But this ad was still definitely sure to offend, which was why Young made sure to soften the blow by playing with semantics: Instead of using the word "armpit" which was too aggressive, he dulled it with "underarm." And with that, Odorono had its way in.

Now that they had their synonyms down, it was time to whip up a melodrama in the pages of a magazine.

The first full-page Odorono ad appeared in the Ladies’ Home Journal in 1919, with a picture of a man and a woman leaning in to kiss while on an evening stroll through a garden. Underneath it was a terrifying idea: What if you were about to ruin your love story with your BO, and you didn't even have a clue? They were planting seeds of insecurity.

"With this ad, Young penned one of the most famous lines in advertising history: 'Within the Curve of Women’s Arm' followed by a subhead that read: 'A frank discussion of a subject too often avoided.' The copy went on to elaborate on the idea that you could offend other people through perspiration odor and not even know it yourself," Dr. Sivulka explained.

And women were pissed. People were so insulted over the ad that Ladies Home Journal lost 200 subscriptions right after the issue hit doorsteps, but something interesting happened despite the indignation over having their body parts flaunted on glossy pages. Odorono's sales soared by 112 percent. Women were listening.

Odorono was no longer a soap or a prescription you'd pick up from your doctor — it was a beauty tool. "By using the advertised product, so goes the melodrama formula, one could not only change her look but also remake herself and her life chances," Dr. Sivulka wrote.

The copy exploited women's insecurities, and that's exactly what got women's attention.

The mini soap opera on magazine pages worked well, but like all things, it soon started to lose its effects once women got used to the formula. So Odorono had to switch it up a bit, this time enlisting the help of a friendly advisor. Borrowing the voice of a newspaper advice columnist or a trusted friend you'd have tea with in your kitchen, this friendly advisor would offer woman-to-woman advice as if she had your best interest in mind.

Odorono's was "Ruth Miller," and she was introduced as a staff member from the corporate offices, sympathetic to what her fellow women were going through. With headings like, "She's lovely to look at, but when she's near - oh dear!" and "Humiliating, yes - but just as well to know," Ruth was ready to help her readers through these embarrassing moments.

"J. Walter Thompson copywriters created a caring, friendly advisor who spoke to reader with chatty 'write-me columns' to promote products," Dr. Sivuka explains. And readers did respond to those columns, and by droves. Not only did they write letters to Ruth, but they bought the product in mass. There was no "maybe" about deodorant anymore — no one wanted to risk the possibility of stink.

Men got to wear blazers and jackets all day, so keeping their stinkiness insulated wasn't too much of an issue. And even if the gentleman riding on the train next to you did smell, it wasn't much of a problem. Odor was manly and it came with the territory. Which meant advertisers had to find a way to tear that idea down.

While women were easily roped in with social shame and insecurities, men weren't. So marketers had to hit them where it hurt the most: Their duty to provide. The plan was to convince them that if they stunk they'd lose their jobs, and seeing how this plan was hatched during the Great Depression, it carried a lot of weight.

"To add a dramatic flair, the idea was that BO threatened their jobs, social positions – even their homes," Dr. Sivulka explains. If you didn't want to risk ending up in the soup line, you had better scrape together the money and buy yourself some antiperspirant.

These whisper campaigns did the trick and created an insecurity that wasn't there: You might not have thought this was a problem, but what if other people have noticed? And what if it led you to lose a Friday night date or the corner office?

The question then immediately follows: Will it be worth not buying the product and finding out?

It seems too manipulative to work, but it definitely succeeded — who nowadays goes on a job interview, a first date, or hot summer day without reaching for that deodorant stick in the bathroom cabinet?