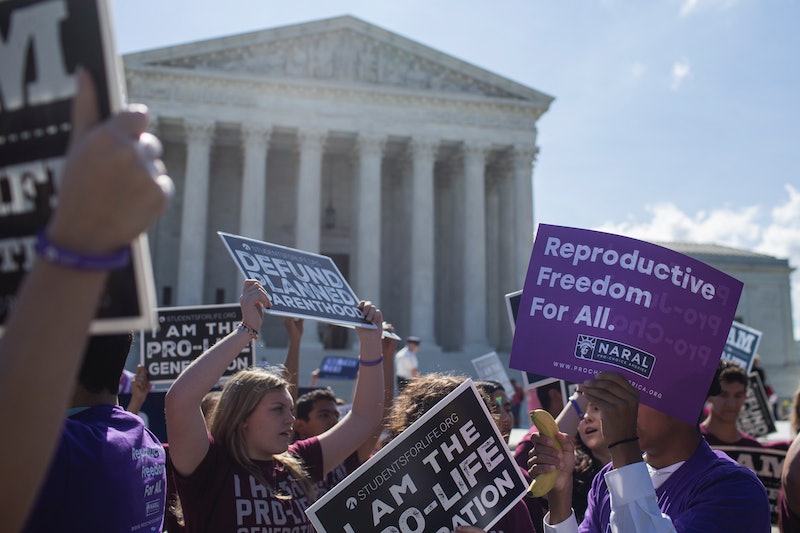 Abortion rights advocates suffered a defeat at the Supreme Court on Tuesday, but there's apparently more to the decision than meets the eye. The high court struck down a California law that had required anti-abortion crisis pregnancy centers to offer information about abortion, and the 5-4 crisis pregnancy center Supreme Court decision came down along ideological lines. But some experts who've looked at the dissenting opinion in the case argue that the decision isn't all bad news on the reproductive rights front.

In fact, much of the majority decision focused on free speech and not on abortion. The law required centers licensed by the state of California to provide patients with information about contraception, abortion, and pre-natal care that is available to them at little or no cost; unlicensed centers were required to post a sign with similar information, as well as to disclose that they were not licensed medical facilities.

The law was challenged by the National Institute of Family and Life Advocates, an anti-abortion group with connections to 140 crisis pregnancy centers in California.

Justice Stephen Breyer's dissent was joined by the other three liberal justices, all women. In it, he made many comparisons to laws that require women seeking abortions to be informed of other options, such as adoption; he also referenced the ruling that upheld those laws, Planned Parenthood of Southeastern Pennsylvania v. Casey. Experts believe those comparisons could be used to argue that such anti-abortion laws are unconstitutional, based on the same tenets of free speech that the majority of the court cited in striking down the California law.

Essentially, it comes down to this: If crisis pregnancy centers don't have to tell patients abortion is an option, do abortion providers have to tell patients adoption is an option? Lois Shepherd, a professor of biomedical ethics, public health policy, and law at the University of Virginia, tells Bustle that the ruling could actually apply to a much broader range of anti-abortion laws.

"I think this opens up a much bigger can of worms than just rules about giving information about adoption," Shepherd says. "That does seem very comparable, but if you’re going to prevent a state from requiring this information about the availability of state services, then it will be hard to uphold a requirement that a physician say human life begins at conception."

Many states have laws telling abortion providers what they need to say to women seeking abortions. Those laws have been challenged as undue burdens on the right to obtain an abortion — and, as Breyer points out, have been upheld since Casey. But they haven’t been challenged under the kind of First Amendment theory developed here. In the long run, the ruling here may limit states’ ability to force doctors to provide certain kinds of information.

In his dissent, Breyer noted that the majority opinion tried to differentiate between the rules conservative states have imposed on abortion providers and the California law because "the disclosure here is unrelated to a 'medical procedure,' unlike that in Casey." According to Breyer, that logic implies the government has no reason to "inform a woman about alternatives to childbirth (or, presumably, the health risks of childbirth)."